Kage by Maris Black - Book Tour with Review and Giveaway 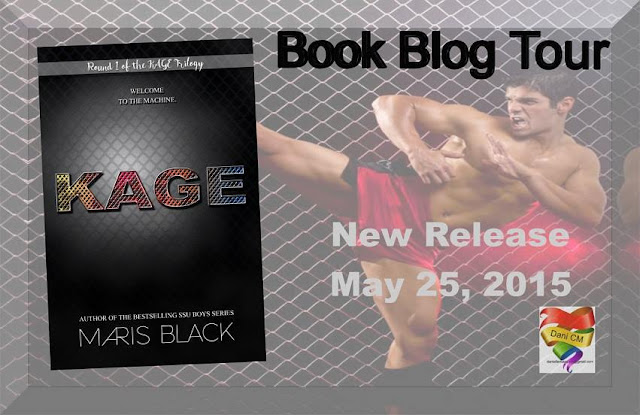 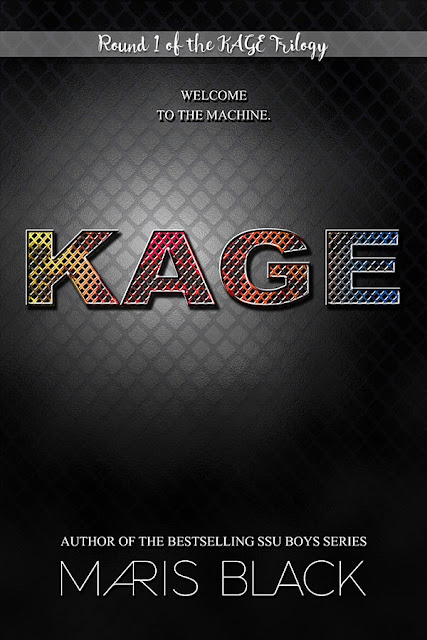 ROUND 1 of the KAGE Trilogy

My name is Jamie Atwood, and I’m an addict. I never thought I’d say such a thing. Never had a problem being overly-attached to anything in my life. I came from a perfectly middle-class family, made good grades, and had a hot cheerleader girlfriend. But the truth is, nothing ever really moved me. So how did a guy like me become an addict?

Kage is an MMA fighter. A famous one. I like to think I helped him get that way.

He’s charming as hell, with looks to rival any movie star and talent to back it up. So why did he need to hire me as an intern Publicist? Simple. He has a darkness in him– like a black hole so deep it could swallow him, and me, and everyone we know– and that’s not good for business.

The first time I met him, I felt the pull. I think the addiction began at that very moment. And even if I’d known then what I know now, I would have fallen for him. How could I not?

For me, Kage is everything.

Kage pushed his tongue deeper into my mouth, and suddenly I was sucking hungrily at his tongue, winding my arms around his neck, and pressing my lower body against his. I was desperate to get closer, to feel through the barrier of my clothing what he had pressed against me. My hunger knew no bounds, growing exponentially with each passing second as it became clearer that this was not some fevered fantasy. This was actually happening.

And I was going to let it.

He unwound my arms from his neck and reached down to pull my t-shirt over my head so that we were skin to skin. The scrub of chest hair against my nipples was exquisite torture, and I moaned, pulling back to catch my breath.

“Fuck no, you’re not going anywhere!” Kage yanked me back against him. “I’ve waited too long for this. Been patient enough.” He covered my mouth and face with kisses, moved down to my throat, and bit the sensitive skin there until I cried out. I was overcome with passion, my breath coming in quick gasps as I fought to keep it together. I had always thought of myself as a player and a skilled lover, but I swear Kage made me feel like a virgin all over again.

“Take off your pants,” he said.

“What are you planning on doing to me?” I asked, my voice distant to my own ears as I worked my shorts down my legs, leaving my boxer briefs on.

“What I should have done when you first got here…”

He chuckled. “I could tell by the way you look at me. Like you’re eating me alive with your eyes.”

“Liar.” Kage shook his head and took a step back. “Get on your knees, Jamie.”

“Don’t give me that look. I said get on your knees.”

I wanted to tell him no, that this was insanity, and that I wasn’t gay. I wanted to point out that I’d just recently had a girlfriend whom I’d fucked soundly on a regular basis. But instead I sank to my knees in front of him and waited, looking up at his unbelievably perfect body, all muscles and planes and smooth skin. The boyish face with the five-o’clock shadow, the dark locks of hair that fell loosely around his face… and that’s when I felt it. He was right. I was devouring him with my eyes, because God help me I could not get enough.

So I was pretty excited to see a new book by Maris Black. After all I've enjoyed the SSU Boys series, and loved Owning Corey, so I fully expected to like this book too. Now toss in MMA fighters and I was a bit trepidatious because the few MMA books I've tried I haven't really enjoyed. Well Kage met almost all of my expectations and then some.

Kage starts out with our main character Jamie, having sex with his girlfriend. Now before you go "Ewwwwww" and walk away from this book, this is NOT a major part of the story, but it is part of who Jamie is so it is essential to the storyline. The other forewarning is that Kage does end in a bit of a cliffhanger but luckily the next book is set to release in just a few months.

I really liked the way this story played out, it definitely wasn't your typical new adult romance. It's what I'd consider a slow burn with a friends to lovers thing going on between Kage and Jamie. And the dance between them was hotter then if they were ripping their clothes off from the moment they met and having wild sex 24/7. That Jamie's feelings snuck up on him out of the blue... well not really but he hid them from himself really, really well. And that alone is a big part of the story because who he thought he was, really isn't who he actually is.

Kage, as a character, and also as the story as a whole is pretty intense and by the end it left this reviewer with a good sized book hangover. I really wasn't ready for that last scene between Kage and Jamie and that one was rough! Again though, this is the first book in the series with these two characters, the next is set to come out in August. Which just gives me another reason to wish August was closer.

All in all I really loved this story and other than the cliffhanger it was a pretty perfect book for me. You really need to pick this one up asap and give some love to Jamie and Kage!

My name is Maris Black (sort of), and I'm a Southern Girl through and through.
In college, I majored in English and discovered the joys of creative writing and literary interpretation. After honing my skills discovering hidden meanings authors probably never intended, I collected my near-worthless English degree and got a job at a newspaper making minimum wage. But I soon had to admit that small town reporting was not going to pay the bills, so I went back to school and joined the medical field. Logical progression, right? But no matter what I did, my school notebooks and journals would not stop filling up with fiction. I was constantly plotting, constantly jotting prose, constantly casting the people I met as characters in the secret novels in my head.

Yep. I can blame my creative mother for that one!