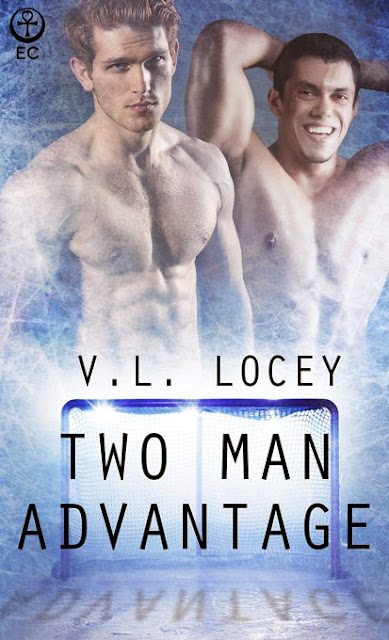 Blurb: Victor Kalinski, all-star forward for the Boston Barracudas, is one of the biggest jerks in professional hockey. Before long his aggressive attitude gets him shipped off to play in the minor leagues.

Furious, he takes to the ice with equal amounts of skill and scathing sarcasm, which doesn’t win him any friends—except for good-natured alternate captain Daniel Arou. He won’t take any of Vic’s crap, and he won’t take no for an answer.

But Vic’s troublemaking is pulling his career one way while Dan’s talent is pushing his in the other. However much they scorch the sheets, they might soon be separated by more than Vic’s fear of being hurt.

Inside Scoop:  This book contains scorching gay sex and a heaping helping of no-holds-barred snark between hot hockey heroes who don’t pull their punches.

One short little shit got my attention when Lambert told them to try again. He was a dark-haired little scrapper with a light-sienna complexion, who got into the corners, putting elbow to nose and lumber to teeth with no remorse until he got the puck free. I liked his grit. And the way his dark hair hung out from under his lid, flipping up at the ends. The man had some good flow going on.
His style was good, his eyes sharp, his stick handling above par and his ankles strong. He was the only one who had a grasp of what he was supposed to be doing, if you asked me. When he skated past in pursuit of the puck, I got a glimpse of a round, cute face with a button nose and lapis lazuli eyes. He executed a perfect side-stop, his plump mouth drawing up as he looked at me.
“Holy shit, it’s the big bad boy of Beantown,” he yelled to be heard over the shouts of his teammates. There was a noticeable Canadian accent when he spoke. He was probably no older than my twenty-four, if that. He wore the big A on his shoulder, so I knew he was an alternate captain. Shit, but he had a sexy Elvis Presley mouth. “What’s your expert opinion on how we’re looking, Kalinski?”
"To quote Reggie Dunlop as played by Paul Newman in Slapshot, 'Jesus Christ, what a *#*#* nightmare."
He chuckled then skated down ice. His said his last name was spelled A-R-O-U.
Coach Lambert skated into my line of sight. I smiled pleasantly.
"What kind of fresh holy *#*#* hell is this?" Coach asked, coming through the gate and stalking past me. “Did you think I was kidding when I told you never to darken my door again, Kalinski?” he asked, throwing the door to his office open.
“You’re going to *#*# the shit out of those blades,” I pointed out as I lingered in the doorway. Coach Lambert threw me a blistering look. I didn’t remember him hating me quite this badly. “But hey, it’s your nutsack Carl will roast over an open fire, not mine.”
“Shut the door, sit down and keep that toxic *#*#* mouth of yours closed.”
I did as he asked. Lambert fell into a rolling office chair to unlace his skates. The plastic wheels whimpered at the abuse. His gray eyes drilled into mine as he untied his laces with short, jerky motions. One skate sailed across the room, hitting the wall with a sickening thud.
“I can’t believe this is how the *#*#* repay me for fourteen years of coaching expertise,” Coach snarled, yanking violently on a hellacious knot in his laces.
“Your team has come in last for the past two years. I’m not sure you can call that expertise.”
Lambert nearly ripped his foot off. The skate flew past my left ear and embedded itself a good four inches into the sheetrock behind me. Slowly shifting my attention from the skate of doom to Lambert, I gifted him with one of my “I was only kidding” smirks. It had little to no effect. If anything, the vein right above his left eye thumped faster. 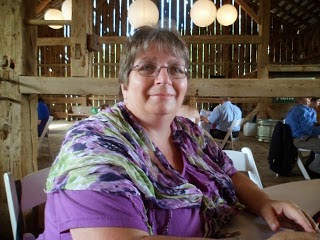 V.L. Locey loves worn jeans, belly laughs, reading and writing lusty tales, Greek mythology, the New York Rangers, comic books, and coffee. (Not necessarily in that order.) She shares her life with her husband, her daughter, one dog, two cats, a flock of assorted goofy domestic fowl, and  two steers.
When not writing spicy romances, she enjoys spending her day with her menagerie in the rolling hills of Pennsylvania with a cup of fresh java in hand. She can also be found online on Facebook, Twitter, Pinterest, and GoodReads.
I love to meet new friends and fans! You can find me at-

Get a chance to win a digital copy of Two Man Advantage by V.L. Locey!
Enter the Rafflecopter NOW.
a Rafflecopter giveaway