Piece Us Back Together by Cate Ashwood, L.J. LaBarthe, and Raine O'Tierney - Book Tour with author post and giveaway 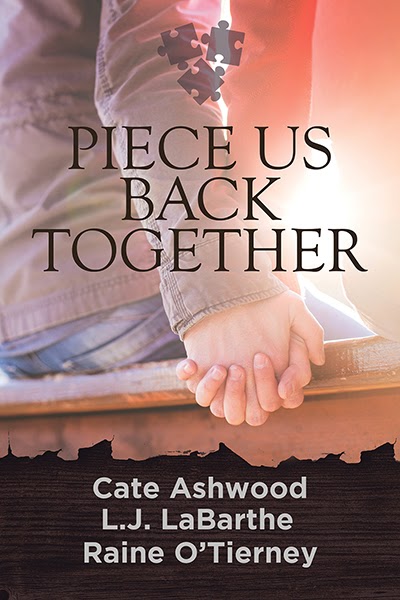 Piece Us Back Together:
Life can seem bleak for people suffering devastating injuries or illnesses of the mind and body, and every day can be a struggle. But sometimes, when hope seems in short supply, they find a reason to keep up the fight. The men in these stories face some of the most difficult challenges imaginable, but fortunately they won’t be facing them alone, because when everything seems darkest, a point of light appears. With compassion, understanding, and love, these hurt souls have a chance to piece the broken parts of their lives and themselves into something strong and beautiful. Love might even be able to mend the most serious wounds of all—those of the heart. 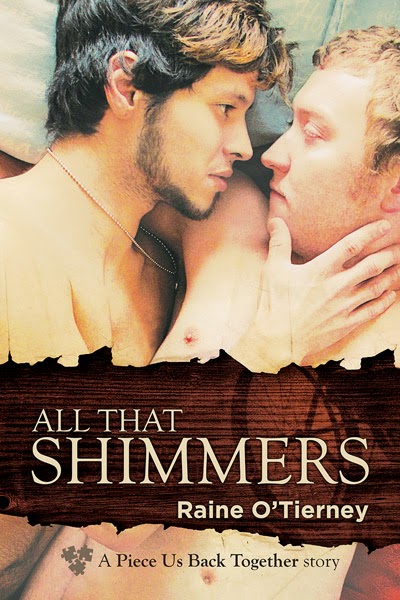 All That Shimmers by Raine O’Tierney
Available May 6th, 2015
Beau Bell is a former Olympic hopeful, left paralyzed from the waist down after a car accident. He has every reason in the world to be pissed off and miserable, yet he’s training for the Paralympics Men's 100m—S6 division. The chair? Just a part of who he is now. Beau's attitude is golden. If only he could contend with this one little issue: errant erections and no way to relieve them!
Nikša Meríc is a lonely scientist and really bad poet living underneath the old building where he does his research. Every night he watches his neighbor through his basement window as he undresses in his wheelchair. Although there is no apparent reason for Nikša to be unhappy, he’s struggled with depression his whole life and has tried to kill himself on multiple occasions.
When Beau proposes that his “voyeur” come over and help him experiment with the erections he can’t actually feel, the relationship they build is a sexual one. But the relationship they need is one that will heal each other’s heart as well. 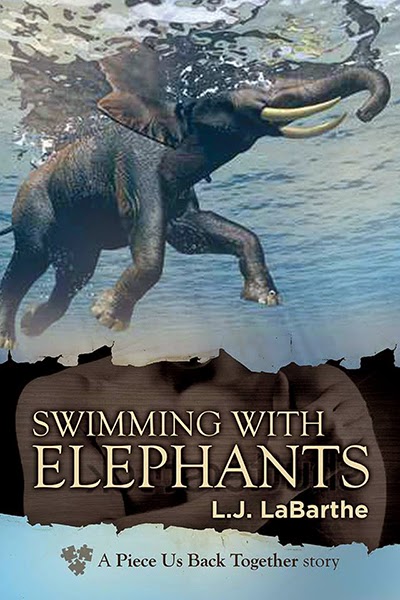 Swimming With Elephants by L.J. LaBarthe
Available May 13th, 2015
After suffering a torn rotator cuff in his left shoulder, Garrett believes his life is over. Depressed, bereft, in pain, and unable to return to the career he loves as an arborist, he sees no hope or future for himself. But a trip to Havelock Island in India turns his world upside down. He meets Jai, an Indian nurse, and becomes smitten with him. Near the end of his trip, while swimming with an elephant, he tells Jai how he feels.
After Garrett returns to Australia, he wonders if he can ever be healed of all his pain—physical, emotional, and mental—and fears that love and romance will never be his again. But then Jai turns up in Perth and brings with him astonishing news. 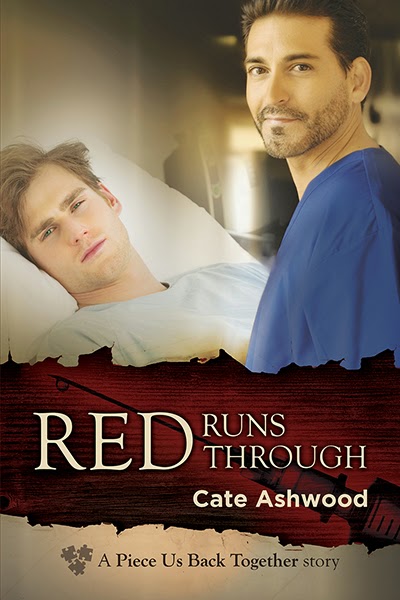 Red Runs Through by Cate Ashwood
Available May 20th, 2015
Carter McClintock’s life is uncomplicated. For the past five years, he’s spent so much time in hospital scrubs that one day bleeds into the next, and that’s just the way he likes it. That is, until he meets Matthew Nolan. Carter has never had a patient affect him the way Matthew does. During Matthew’s stay in the hospital, the chemistry is unmistakable, and once he is discharged, Carter asks him out.
Despite the obvious attraction between them, Matthew’s HIV status keeps him from handing Carter his heart, refusing to believe anyone could ever truly want him. When Matthew’s past comes to light, their budding relationship is threatened before it has even begun. But Carter isn’t one to give up without a fight and he will do anything to show Matthew the lengths he will go to keep them together.

Pages or Words: Varies by book

Excerpt from All That Shimmers by Raine O’Tierney

The feel of Niksa’s mouth against his was wholly different than anything he’d ever experienced. He’d never been averse to making out, but it was never the point. The point was to get off, and lips against lips, at least in the old days, weren’t going to get him there. But these lips on his, they were something different. He could feel the lingering pressure of Niksa’s lips on a spot on his spine. It was a phantom sensation. Lips to lips. Lips to spine. It was as if the kisses were firing off nerve signals in totally new directions. It was heady. And it made him hopeful.

He could have kissed Niksa for hours. And that was something Beau had never done.

“Don’t stop,” Beau groaned, running the tip of his tongue over Niksa’s wet, swollen lips. He’d only broken the kiss to draw breath, and he looked up at Beau with such longing in his eyes that it made Beau crazy. Even though Niksa had been sated, it was obvious he wanted to please Beau, and Beau liked that greatly.

“Keep kissing me,” Beau groaned. “Anywhere. Everywhere.” He turned his face, revealing his neck for Niksa to explore. Each gentle kiss was like fire inside of him, and each one sparked a secondary reaction somewhere else. He could feel kisses to his earlobe and his cheek in his fingertips. The tickling brush of lips over his nose made his scalp tingle. Then Niksa kissed—and then sucked—on Beau’s neck, and Beau felt it in his toes. In his goddamn toes.

He knew he couldn’t be feeling what he was feeling. It couldn’t be real. But it felt real enough, and Beau would have given anything to have it go on forever.

Sales Links:
Piece Us Back Together Anthology:
http://www.dreamspinnerpress.com/store/product_info.php?products_id=6413

All That Shimmers:
http://www.dreamspinnerpress.com/store/product_info.php?products_id=6340

Raine O’Tierney
Raine O'Tierney lives outside of Kansas City with her husband, fellow Dreamspinner Press author, Siôn O'Tierney. When she's not writing, she's either asleep, or fighting the good fight for intellectual freedom at her library day job. Raine believes the best thing we can do in life is be kind to one another, and she enjoys encouraging fellow writers! Writing for 20+ years (with the last 10 spent on M/M) Raine changes sub-genres to suit her mood and believes all good stories end sweetly. Contact her if you're interested in talking about point-and-click adventure games or about which dachshunds are the best kinds of dachshunds!
Website: http://raineotierney.com/
Facebook: https://www.facebook.com/raine.otierney.1?fref=ts
Twitter: https://twitter.com/RaineOTierney

L.J. LaBarthe
L.J. LaBarthe is a French-Australian woman, who was born during the Witching Hour, just after midnight. From this auspicious beginning, she went on to write a prize-winning short story about Humpty Dumpty wearing an Aussie hat complete with corks dangling from it when she was six years old. From there, she wrote for her high school yearbook, her university newspaper, and, from her early teens to her twenties, produced a fanzine about the local punk rock music scene. She loves music of all kinds and was once a classical pianist; she loves languages and speaks French and English and a teeny-tiny smattering of Mandarin Chinese, which she hopes to relearn properly very soon. She enjoys TV, film, travel, cooking, eating out, abandoned places, urbex, history, and researching.
L.J. loves to read complicated plots and hopes to do complex plot lines justice in her own writing. She writes paranormal, historical, urban fantasy, and contemporary Australian stories, usually m/m romance and featuring m/m erotica. She has won a Rainbow Awards Honorable Mention and another award for Best Historical Gay Novel.
L.J. lives in the city of Adelaide, and is owned by her cat.
Blog: http://misslj-author.livejournal.com/
Facebook: https://www.facebook.com/lj.labarthe.9?fref=ts
Twitter: https://twitter.com/brbsiberia
Instagram: https://instagram.com/ljstar239/
Pinterest: https://www.pinterest.com/dreadpiratestar/
Tumblr: https://www.tumblr.com/blog/dreadpiratestarkiller and https://www.tumblr.com/blog/historybuffstar

Cate Ashwood
Cate Ashwood wrote her very first story in a hot-pink binder when she was in the second grade and found her passion for writing. Her first successful foray into romance writing came five years later when she wrote her best friend, who was experiencing a case of unrequited love, her own happily ever after.
Cate’s life has taken a number of different and adventurous roads. She now lives a stone’s throw from the ocean, just outside of Vancouver, British Columbia with her husband, her brand new little boy, and her two cats. Her life is filled with family and friends, travel, and, of course, books.
Website: http://www.cateashwood.com
Facebook: http://www.facebook.com/cate.ashwood
Twitter: https://twitter.com/cateashwood

Can you share a little bit about your character creation process? Do they (the characters) come to you fully formed and telling their story or do you have specific traits/problems/hardships in mind as you craft the character in the story?

When creating a character, I usually go into something like a trance (I imagine this is complete with vacant gaze and parted lips…) and when I snap out of it, there’s some gorgeous gent with a really unusual name in my head… J

Many times I like to develop a character around their struggles and triumphs. I tend to think of people that way—who they are in terms of what they’ve faced and what they’ve overcome, and how much of a smile or grimace they have on their face as they tackle their challenges.

For All That Shimmers, I knew that that Beau was going to be paralyzed from the waist down, and yet, he’s far more free and optimistic (cocky even!) than Niksa who is so crippled by his depression that he suffers his own form of paralysis. Two totally different challenges: one physical, one mental—and the way each man views his life. 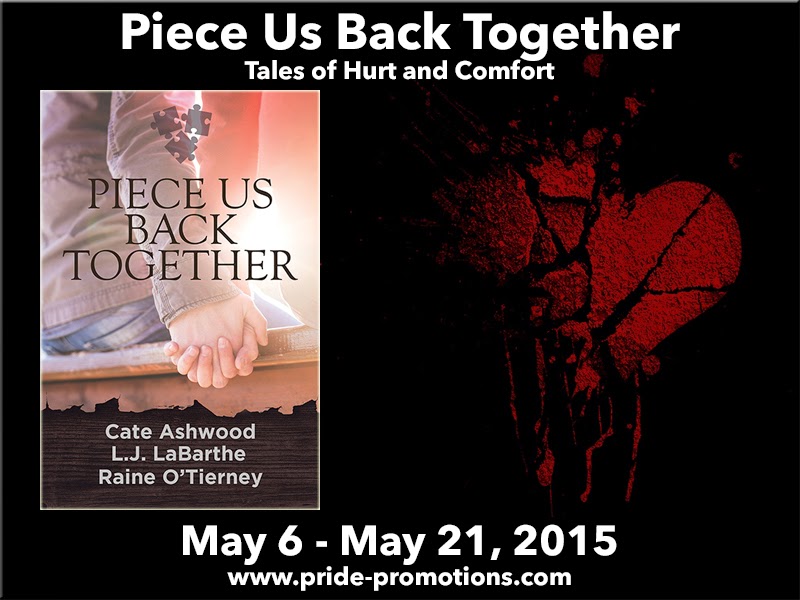 Rafflecopter Prize: One e-copy of each book in the anthology (to one winner)