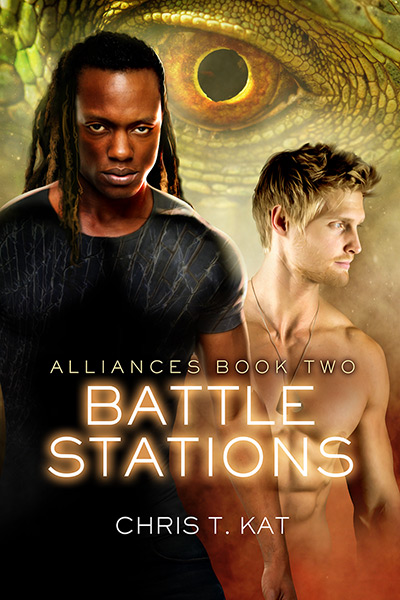 The fight to eradicate the Tash’Ba breeding stations continues, with spunky Commander Berit Turner and his Nadisc mate, Tom, in the thick of things. Sometimes it seems as though they’ll never locate and destroy them all. And there’s always the fear that the Tash’Ba have something else, something worse—if that’s even possible—lurking ahead.

As if things aren’t bad enough, Berit’s less than stellar past is threatening to bite him in the ass, and they’ve received alarming new information. The Tash’Ba Queen needs to use Earth as a place to hatch the egg of her successor. And if what she says is true, the new Queen will be even more voracious and cruel than her predecessor.

Berit, along with his team—Tom, Carson, Niyara, and Fleur—must do everything in their power to stop her. If they fail, Earth will be lost forever.

Excerpt:
Veering to the left, I allowed myself a quick glance over my shoulder. Not that I saw any chance of the elgoth having lost interest in me, because those fucking beasts never lost interest once they’d set their sights on prey, but sometimes a new prey might attract them more, which I’d have welcomed right then.
My lungs burned and my leg muscles smarted like hell from running like a rabbit through thick brushes and overgrown ferns. I even zigzagged around. Too bad I couldn’t find a rabbit’s hole to hide in.
I had no idea where Tom, Carson, and the rest of the team were, either.
We’d been separated before—it happened when gigantic Tash’Ba war beasts decided we looked good enough to eat—but I’ve never liked it. No, scratch that. Every time it happened, it put the fear of God in me. A gust of warm breath, mingled with some spittle, sprayed my neck. I squeaked and swerved to the right, vaulting over a stunted tree trunk. Seconds later, wood splinters sped past my head, and I lost my footing on the vibrating ground.
I sprawled facedown in the mud, panic sending bolts of confusing messages through my body. Maybe… maybe if I kept completely still, the elgoth wouldn’t touch me? The first time I’d made the acquaintance of one of these towering forty-foot-tall creatures, Tom had instructed me not to move, because they wouldn’t be able to locate us.
It had worked on Ligador and a couple of other breeding stations, but last time a team member tried this approach, the elgoth had roared and ripped him apart. All Tash’Ba war beasts seemed to be altering their tactics, making them even more unpredictable than before.
The mud around me sloshed, almost causing me to inhale some of it. I suppressed the urge to cough and kept my mouth shut as tight as I’d ever done, even though a whimper threatened to spill over my lips any second.
Another gust of foul breath struck my neck. My hair stood on end, my muscles locked in some kind of rigid stupor. That was it. I’d end my life as a morsel for an elgoth.
A blast echoed from the south, and the beast’s breath vanished from my neck. Gunfire followed the blast, and voices filtered through my terrified haze. They’d run right into the elgoth if I didn’t warn them. But… if I moved, or raised my voice, the elgoth would bite my head off. Literally.

Meet Chris T. Kat:
Chris T. Kat lives in the middle of Europe, where she shares a house with her husband of many years and their two children. She stumbled upon the M/M genre by luck and was swiftly drawn into it. She divides her time between work, her family—which includes chasing after escaping horses and lugging around huge instruments such as a harp—and writing. She enjoys a variety of genres, such as mystery/suspense, paranormal, and romance. If there's any spare time, she happily reads for hours, listens to audiobooks or does cross stitch.
Where to find Chris T. Kat:
Facebook: http://www.facebook.com/ChrisTKat
Twitter: http://twitter.com/christi_kat
GoodReads: http://www.goodreads.com/ChrisTKat
Blog: http://christikat.blogspot.com
Amazon Author Page: http://www.amazon.com/Chris-T.-Kat/e/B008FQQH2Q 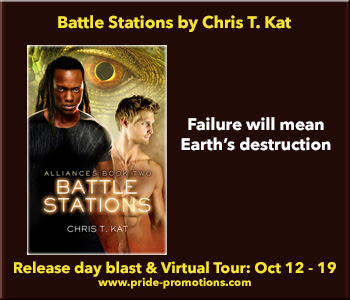