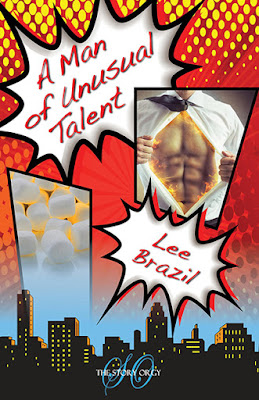 A MAN OF UNUSUAL TALENT:

Collin Crane is a man of unusual talent. Really unusual. Too weird for the Guinness Book unusual. On the fifty-year plan to a doctoral degree in physics, and a quiet quest to understand his own oddities, Collin clings to obscurity.  This superhero has learned the hard way that it's better to be safe than sorry.

Enter Mathias Giraud, football hero, local cop, and CC's secret fantasy since high school. Mat's a simple man with a hero complex fostered by comic books and Marvel movies. Saving the world is his fantasy, but since his roots are firmly planted in Morrisonville and reality, he'll settle for protecting and serving. Until he clashes with CC at the local convenience store and is reminded of his own high school crush.

When marshmallows are involved, the course of true love is bound to get sticky. 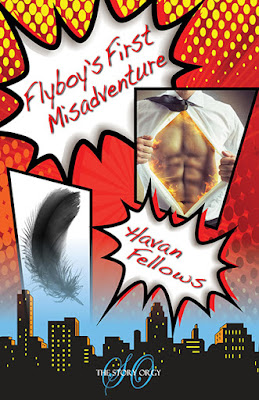 Secrets? Oh yeah, Dean Wades has a doozy. When he goes up, he doesn’t necessarily come back down. Okay, that’s not true. Dean’s a master at falling, it’s the landing that could use improvement—a lot of improvement. After thirteen years of attempting to conquer this gravity defying mystery, he can no longer live with not knowing what he is anymore. So he heads cross-country to see the two people who just might be able to give him the answers he seeks…his folks.

Easygoing Gavin Trevor is always willing to help his family, even when they have ulterior motives…like forcing him to make up with his annoying older brother. When a simple task at his parent’s house puts him in a position of danger, he’ll need a lot more than luck to avoid a serious injury—he’ll need his very own superhero.

And the fates collide, well sort of. It may not be love at first sight—Gavin was unconscious in Dean’s arms for their initial introduction…but perhaps these two men can make it a relationship at first flight?
A threat against Gavin’s family throws a wrench in their plans, and while Dean gladly offers his amateur talent to help the mission, Gavin doesn’t want to put his rescuer’s life in jeopardy by risking exposure of the greatest secret ever.

This proves to be a rescue adventure for the books. Or is that a rescue misadventure?

A Man of Unusual Talent:

Mathias squirmed on the seat. Had to piss. He cast a glance at his partner. Dillon was such a hard-nose. “Hey…how about you pull into that gas station over there? I got to take a leak.”
Dillon’s lip curled, but he swung the patrol car into the convenience store parking lot. “I told you not to get the grande coffee at Mabel’s. Good thing it’s dead tonight.”
“Want anything while I’m in there?” Mat paused with his hand on the door latch, cocking his head at Dillon. Guy wasn’t so bad…just a walking encyclopedia of procedure and a nitpicker. He gave out more jaywalking and broken taillight tickets than any cop on the force.
“No eating in the squad car.” Dillon turned to face him, lips narrow and tight, radiating disapproval.
“You know…if you weren’t my brother…” Mat shoved the door open with unnecessary force. The captain was punishing him…all because he’d missed last Sunday’s dinner with the family. Well, Pop should learn to separate work from personal. Riding with Dillon for a week was going to be torture. If Pop…Captain Giraud, head of Morrisonville’s twenty-five man police force…made good on his threat to force his grandsons to ride together for a month they’d be lucky if the both of them survived.
Shaking his head, Mat slammed the cruiser door as forcefully as he’d opened it. A poster on one of the convenience store’s huge plate glass windows boasted of sixty-four ounce sodas in refillable Hulk, Hawkeye, Iron Man, Black Widow, and Thor cups. Mm. I need to go see that new movie. “I’m getting a soda,” he called over his shoulder to Dillon as he opened the door. “Can I get the restroom key?”
His gaze automatically surveyed the interior, noting it was deserted except for the cashier…a cute little guy named CC he vaguely remembered from high school…and two hoodie-wearing teens. “Everything okay tonight, CC?” he asked. Not that he expected a negative answer; it was just that Collin Crane looked a little freaked. The two kids weren't any bigger than Collin and weren’t familiar to Mat, so he figured they weren’t troublemakers. Generally he’d had dealings with most of the town’s rowdy teens.
“Yeah, fine, these two were just getting gas. Thanks for coming in, fellas.” CC stepped back, grabbed the restroom key off the hook, and tossed it to Mat.
Mat caught the keys, watching the boys leave without speaking. “Seriously, CC. Those kids giving you trouble? I can talk to them.” Something about the smaller man…regret probably, for ignoring the way the kid was bullied in high school…made him feel a little protective. It was weird, but Mat had learned a lot since he’d turned his back on bullying when he was a kid. Then he’d thought it was enough that he didn’t participate when Jake and Thorn and the others messed with the younger kids. Now…social guilt? Whatever. He was a better person at thirty than he had been at fifteen.
CC looked up, cheeks flushed a little, lower lip trembling. “No…it’s okay. They just wanted gas.”
“Okay. I’ve gotta go, but I want a Thor cup when I get back.” He nodded and walked toward the narrow hall lined with empty boxes which led to the restroom.
“You a fan of The Avengers?” CC called after him.
Mat paused and glanced back over his shoulder, letting his smile widen. “I’m a huge fan of Thor…that is one well put together man.” He was still chuckling over CC’s strangled response when he closed the restroom door.

He attempted to roll the green-eyed man with the dreamy voice off him, but only succeeded in flipping them over so he was now stuck on top. What the fuck? He glanced down their bodies and noticed a cord of some kind wrapped repeatedly around their midsections and legs. No wonder his legs had stopped obeying him. A quick look up showed him numerous clothes line poles with no actual line attached to them.

Well, that was probably because it was all bound around their bodies…and tight too. In the middle of their airborne Cirque du Soleil auditions, their bodies managed to rearrange themselves so the clothesline wrapped them up in the missionary position. With them being damn near close to the same height they lined up quite perfectly with each other.

And that thought made Dean’s cock jump and want to do a few flying lessons of its own.

Dean saw the fog lift from his captive’s eyes as they narrowed with suspicion. His voice was steely this time, not whimsical and light with confusion. “What is happening?”

When all else failed, there was one surefire way to handle what appeared to be an unhandleable situation—channel his snarky best friend Tia.

So he put on a lopsided smile and shrugged as he tried to loosen their bonds somewhat. “You know how Mondays are…run out of coffee, get an extra dose of paperwork at the evil day job, end up in a neighbor’s backyard tied to a charming and well-meaning stranger…” He forced a chuckle out for good measure.

Somewhere in a small town in up-state New York are a librarian and a second grade teacher to whom I owe my life. That might be a touch dramatic, but it's nevertheless one hundred percent true.
Because they taught me the joy of reading, of escaping into worlds crafted of words.

Have you ever been nine years old and sure of nothing so much as that you don't belong? Looked at the world from behind glasses, and wondered why you don't fit?

Someone hands you a book, and then you turn the page and see… There you are, running from Injun Joe in a dark graveyard; there you are fencing with Athos; there you are…beneath the deep blue sea- marveling at exotic creatures with Captain Nemo.

I found myself between the pages of books, and that is why I write now. It's why I taught English and literature for so many years, and it's why my house contains more pounds of books than furniture.
If I'd had my way, I'd have been a fencer…or a starship captain, or a lawyer, or a detective solving crimes. But instead, I am a writer, and I've come to realize that's the best thing in the world to be, because as a writer, I can be all those things and more.

If I hadn't learned to value the stories between the pages, who knows what would have happened? Certainly not college…teaching…or writing.


I annoy, love, respect, scare, seduce, hurt, anger, infatuate, frustrate, flatter, envy, amuse and tolerate everyone. I just do it better in writing thanks to a little thing called…edits.

I recently took the drastic step of quitting my EDJ (evil day job) and am now living in the gorgeous desert in Arizona making a go at this writing stuff full time…and I can’t see me regretting this decision ever.

Just like every other red-blooded human—I get a little bouncy when I get mail (any kind too…email, comments, private messages…you wanna do it, do it with me *winks*). So feel free to drop me a line—whether it's on my blog, twitter, PInterest, or you track me down on FaceBook or Google +…it's easy to catch someone who wants to be caught.

I specialize in writing boyxboy though I read almost everything...and I fancy myself as slightly funny every once in a while. :)

Author Q & A with Havan Fellows and Lee Brazil

Havan: Hidey ho good neighbor! And thanks to Chris at Wicked Faerie's for allowing us over.

Havan: I’m Havan Fellows and this sweet as pie guy over here that I’m about to steal the coffee from is Lee Brazil…

Lee: *glowers and cradles coffee mug protectively* Not. A. Chance. Get your own. *Smiles winsomely* And you all do feel free to help yourselves.

Havan: Now, wouldn’t that be a superpower to have! Being able to manifest coffee with just the power of our minds.

Lee: Hm. yes… that would be a really, really *smacks grabby hands* useful talent to have. But if you don’t leave my coffee alone the question we are answering today will take on a whole new meaning for you…

Havan: I just love when the coffee (and Lee) play hard to get.

What do you want your tombstone to say?

Havan: Sausage, mushrooms and anchovies...oh, wrong type of tombstone, oops. (did I just show my age? lmao) Probably something corny and stupid that only my friends and family members would get - all the others strolling the graveyard would look at it and say how corny and stupid. I don’t know, something like: She enjoyed the voices in her head, they’re probably the reason that she’s dead… lol (did I mention I love macabre?) 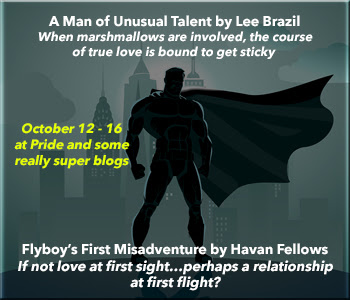 Rafflecopter Prize: 2 - $10 ARe Gift Cards (One each to two winners)