Behind the Eight Ball by M.A. Church- Blog Tour with Author guest post and Giveaway 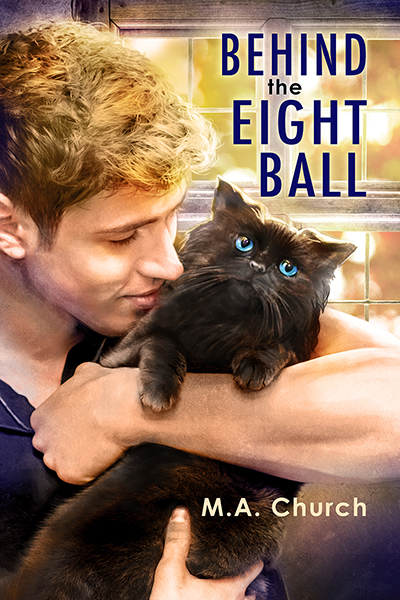 Book Name: Behind the Eight Ball
Series: Fur, Fangs, and Felines
Book: Two
Can be read as a standalone, but book one does give information about one of the MCs.
Goodreads Link: https://www.goodreads.com/book/show/27153448-behind-the-eight-ball
Publisher: Dreamspinner Press
Cover Artist: Paul Richmond

A cool morning, a yard full of birds, and a kitty on a mission. What more could a werecat want? Beta Heller Wirth has it all, except a mate—a shifter mate, that is. The last thing he wants is one of those dangerous humans who kill without remorse. Heller knows about that firsthand. So what does the goddess Bast do? She gives Heller exactly what he does not want—a human: business owner Lawson Dupre.
Lawson hasn’t a clue what just happened in his car detail shop. One minute a cute client is about to pass out, then he perks up and starts flirting. Next thing, he runs out the door like the hounds of hell are after him. Learning that Heller is a werecat doesn’t freak out Lawson. He happens to be one of those rare humans who knows paranormals exists. He even lives with one. Watch the fur fly as Heller and Lawson battle hurt feelings, misguided beliefs, and a power shift in Heller’s clowder.

Step.
Step.
Stop.
The rustling of dead leaves caught my attention, and I froze with one paw still in the air. Not moving and barely daring to breathe, I waited. My whiskers twitched as a cool October breeze disturbed the scent of decaying leaves and rich soil. The foliage trembled again as something rooted around.
I slowly lowered my paw. The disturbance wasn’t very noticeable except to my predatory gaze. The movement continued. Gradually, bit by bit, I crept forward, making sure my long fur didn’t disturb the surrounding mounds of dying leaves. It was times like these I wished my coat were short like Dolf’s. One thing was for sure—whatever was below those leaves was going to be mine shortly. All I needed was to cover a little more distance and I’d be close enough.
Step.
Step.
Crouch.
Heart thumping, I watched as the movement continued. My muscles tightened and my bottom started wiggling. Unable to wait, I sprang forward, claws extended. Leaves flew into the air as I landed on my target. Bugs scattered. Eyes narrowed, I searched for…. There! There was the little bugger. I growled at the big black beetle and trapped it with my paw.
Seconds passed. The bug wiggled under my paw, tickling me. Hunched down, I carefully lifted my paw and peeked. Dammit, can’t see. Unable to get a good look, I lifted my paw a little higher… and there it went, scuttling across the ground. Gleefully I slammed a paw down, trying to trap it. Slap. Slap. Slap. Arrgh! What’s the deal? I keep missing.
Looked like I’d found myself in a game of whack-a-mole, except with a beetle. And off we went. The bug scurried away with me hot on its trail. Every time I thought I had a paw on it, I ended up missing. Stupid critter was fast. I bounded along behind as it raced across the ground. Then it suddenly cut back and ran straight under me.
Surprised, I leaped in the air, all four paws coming off the ground. Whoa! Zigged when I should have zagged. I landed and nonchalantly licked a paw. Hope no one saw that. I had to give the bug credit. That was a smart move. The shrill cry of a mockingbird caught my attention. I lifted my head, searching for the little tattletale.
Up in a tree it sat, its warning cries echoing around the yard. I eyed the tree. Hmm, I could climb it, but the stupid bird will probably just take off. Still, might be fun. Maybe after I finished playing with the bug… and damn. The bug.
My attention returned to where it had been, my tail slashing. Great. Lost it. Stupid bird. I sat up and threw a glare over my shoulder at the bird. Standing, I turned my back to the little menace, tail held high. That’s what I think of you, buddy. I prowled around for a while, sniffing, enjoying the coolness of the morning.
In the early morning sunlight, the dew on the grass sparkled like diamonds. Maybe it was pretty, but the stuff was also cold and wet against my paws. I was glad for my fur. As I wandered back toward the house, my stomach growled. I was hungry and… I sniffed. Oh, was that a blue jay I smelled? Oh, oh, a blue jay. Yum.
The human side of me groaned, but the kitty part wanted to jump with joy. The noisy little shits were actually quite intelligent. Catching one was always a feat. Quick as I could, I hid in the bright fall foliage by the back porch. I stayed very, very still so the stupid bird three feet from me didn’t fly off in a panic.
I licked my lips, my whiskers twitching as I watched the little rascal across from me raise its head. Shit, shit, shit. What caught its attention? Come on already. It’s all fine, nothing to worry about here. No cat hanging around. Just go back to pecking around on the ground. Everything’s good. See? I’m not moving, not even breathing.
Crouched low, I waited while my breakfast relaxed and returned to looking for acorns. Other birds came and went, but I refused to get distracted. I knew the one I wanted. Inch by agonizing inch, I crept closer to my prey. My mouth watered and my heart thumped.
The chatter of the birds around me was easy and relaxed, no distress calls sounding. That’s right. Just keep on eating. Soon I’m going to be eating you. My body tensed, back legs ready to spring me into action….
And the phone in the house rang.

Tell us the highlight of your writing career (so far).

I’ve been writing professionally for a couple years, and in those couple of years, I’ve had some nice things happen. Shadows in the Night won Honorable Mention in the 2013 Rainbow Awards. Trouble Comes in Threes had a feature in Tease Magazine, and Becky Condit from USA Today reviewed it.

But the best thing so far was my acceptance into SWFA (Science Fiction and Fantasy Writers of America). I guess what I’m so proud of is the fact that you have to qualify in order to be considered for acceptance. Fortunately for me, recently they relaxed their guidelines just enough for me to qualify.

But what I’m really proud of is the fact that The Harvest series is what qualified me. It was the second thing I had ever written and the first time I tried my hand at science fiction. Of course, I’ve been watching sci-fi for as long as I can remember LOL.

Meet the author:
M.A. Church is a true Southern belle who spent many years in the elementary education sector. Now she spends her days lost in fantasy worlds, arguing with hardheaded aliens on far-off planets, herding her numerous shifters, or trying to tempt her country boys away from their fishing poles. It’s a full time job, but hey, someone’s gotta do it! 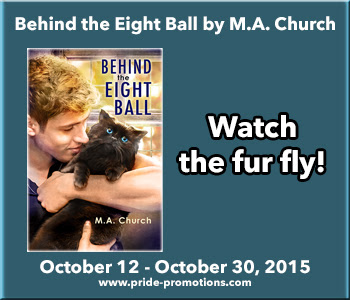 Rafflecopter Prize: E-copy of 'Behind the Eight Ball'