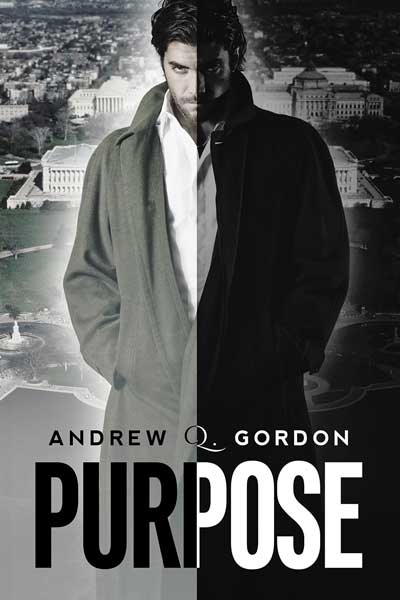 Forty years ago the Spirit of Vengeance—a Purpose—took William Morgan as its host, demanding he avenge the innocent by killing the guilty. Since then Will has retreated behind Gar, a façade he uses to avoid dealing with what he’s become. Cold, impassive, and devoid of emotion, Gar goes about his life alone—until his tidy, orderly world is upended when he meets Ryan, a broken young man cast out by his family. Spurred to action for reasons he can't understand, Gar saves Ryan from death and finds himself confronted by his humanity.

Spending time with Ryan helps Will claw out from under Gar’s shadow. He recognizes Ryan is the key to his reclaiming his humanity and facing his past. As Will struggles to control the Purpose, Ryan challenges him to rethink everything he knew about himself and the spirit that possesses him. In the process, he pushes Will to do something he hasn't done in decades: care.

He turned where he saw the others disappear and understood why they had stopped: dead-end alley. Ryan stood with his back to the brick wall, wide-eyed and pale. Gar noted the uncontrollable shake in Ryan’s body as the four jackals slowly inched closer. White knuckles surrounded the small bag he’d carried off the train.

The one closest to Ryan inched closer. “You know what time it is.”

“Police!” Gar didn’t wait for them to react to his command. He tightened his leg muscles and moved the moment everyone turned toward the front of the alley. Using the split second before they could focus on him, he leaped over them, twisting in the process.

The space between them and Ryan wasn’t much, but he managed to avoid contact with the kid, landing a foot to the left. He reached into his coat and removed a collapsible metal baton with his right hand and a pair of brass knuckles with the left.

One step right, and he completely covered Ryan’s shaking form. Not risking a glance back, he kept his eyes on the startled thieves in front of him.

A muffled grunt, barely audible, told Gar the kid heard him. He dropped the police officer illusion, staring calmly at his prey. Assessing his adversaries, he ignored the hint of a thought that said they were not the guilty. Too late for that—they would have been had he not stopped them.

“I know what time it is,” he hissed, tossing the slang for street robberies back in their face. “Time for vengeance to collect its fee.”

In the recent past, Gar had taken to finding a way to take out the guilty without doing it himself. This time he couldn’t risk it; Ryan was too close. One of them had a gun. He could smell it now.

He definitely didn’t have time to make it look like an accident.

Spinning on his left foot, he kicked the kid with the gun so hard his skullcap flew off when his head hit the wall. Allowing his movement to carry him around, he brought the metal baton down on the arm of a robber with a knife. Metal on flesh and bone was no contest. Gar saw Ryan flinch when the kid let out a scream of agony and fell to the ground.

At least he would live, Gar noted. The first kid was probably dead already. The other two were rooted in place, stunned into inaction. Two seconds ago, they were about to rob a defenseless kid. Now they were being taken apart. Before they could run away, Gar lashed out.

Using the palm of his left hand, he struck the one closest to him. Even using the inner part of his hand, he heard the brass knuckles crack the kid’s sternum when he connected. The last kid finally moved and made it three steps before Gar swept his feet out from under him with the baton.

The face looking up in terror was that of a kid, a juvenile. They were all kids. Reaching toward the teen’s head, he heard movement behind him.

“I won’t.” His voice was a cold hiss. Instead, he touched the sweaty forehead, inserting confused thoughts. He quickly repeated the process with the others. The first kid still lived, but probably not for long. The other two, he left sobbing out their pain.

Ryan resisted the pull, but Gar was prepared for this. “Either you come with me or I leave you to explain this.”


Purpose is a bit different from anything I've written before. There is an element of romance in the story, but that is just a small sub plot. The real story is more than a bit dark in places.  But like all stories, this one has tries to create something every good one has, no matter the plot, genre or tone, memorable characters. Every good story needs strong characters the reader comes to know and bond with.

The trick with characters is to have enough to move the story and for people to have choices who they like (Team Edward/Jacob anyone?), but not so many you need a scorecard ala The Hobbit and Lord of the Rings. (Can anyone name the twelve dwarves with Bilbo off the top of their head?) The caveat being, if you do write an epic fantasy series like LOTR, you probably do need to provide a glossary to help folks keep things straight.

Purpose has four main characters. Even thought the book is written exclusively from Will's POV, I think we get a good feel for all four. Here is a bit about the four horsemen . . .er . . . characters of Pupose.

William Morgan/Will/Gar.  Will is from a wealthy, old money, Philadelphia family. He attended a prestigious law school where he fell in love. His future was bright until one moment changed it all.  A spirit of vengeance, the Purpose as he's come to call it, chose him to be its host.  It gave Will enhanced speed and strength as well as heightened his mental abilities. The night the Purpose chose him, David, the man Will loved, was killed in a meaningless attack.  Coincidence? Maybe. But either way it altered not just his life, but his existence.

Following David's death, Will answered the cries of the innocent dead as they called out for justice. The spirit compelled him to seek out the guilty and be the hand of retribution.  Carrying out his new 'duties,' coupled with the loss of his lover, took a toll on Will's psyche. By the time we meet him, he's retreated inward and is calling himself Gar.

The Gar we meet is cold and indifferent. His emotions have been walled away so he doesn't have to reconcile being forced to kill people, (even if they are guilty of murder themselves) with the person he'd been before David died.  It's against this backdrop that we meet…

…Ryan Posner.  I've gotten differing feedback on Ryan, but I'll try not to let any of that cloud my opinion of him. To me, Ryan is a nice guy, a bit naïve, and a bit sheltered. He doesn't quite understand Gar/Will at first, but he also feels an attraction. When we meet him, he's been tossed out of his house when his parents find out he's gay. He's twenty-four, so you'd think he'd have a job and be able to make it on his own, but he's not. (Hence the sheltered bit.) When he looks at Gar he sees only Will and wants to bring that part back. I don't think he ever fully accepted what that would cost Will, but he's convinced it's the right thing to do.  His sense of right and wrong is shared by…

…Detective Daniel Griffin of the Metropolitan Police Department. Griffin has been assigned one of the cases involving Gar's victims. Gar wants to find out what the Detective knows so Gar reaches out to Griffin for his own gain. But with the reawakening of his emotions and Ryan's desire for Will to find another way, Gar/Will allows their relationship to grow and he tests if they can't work together to bring the guilty to justice without killing them. Griffin doesn't totally believe Will is a spirit, and often wonders if he's dealing with the Devil, but he agrees to work with Gar so long as they do it legally. His willingness to work with Gar gives Griffin a new opinion of the 'spirit.' This new attitude toward Gar is not the same as the one held by…
… well, since there is a bit of mystery involved in the story, I will leave it that there is another person who has a major role in the story.  You'll need to read it to find out more.

As with any story, there are other characters who play minor parts, but those are the main four (well three plus the one you need to read the book to learn about.) But unlike most books, the minor characters are almost to the person very minor. Hopefully the four I have are enough to carry the book. I think so, but I'll leave that decision to you the readers. 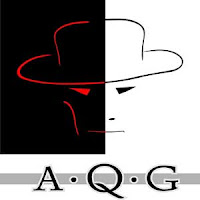 Andrew Q. Gordon wrote his first story back when yellow legal pads, ball point pens were common and a Smith Corona correctable typewriter was considered high tech. Adapting to the times, he now writes with a shiny new MacBook that he sets on the same desk as his manual typewriter and vintage adding machine.

Long a fan of super heroes, wizards and sports, Andrew’s works include high fantasy, paranormal spirits, magic as well as contemporary fiction. He is still trying to find the perfect story that will include all his favorites under one cover.

He currently lives in the Washington, D.C. area with his husband, their young daughter and dog.  In addition to dodging some very self-important D.C. ‘insiders’, Andrew uses his commute to catch up on his reading. When not working or writing, he enjoys soccer, high fantasy, baseball and occasionally sleeping. 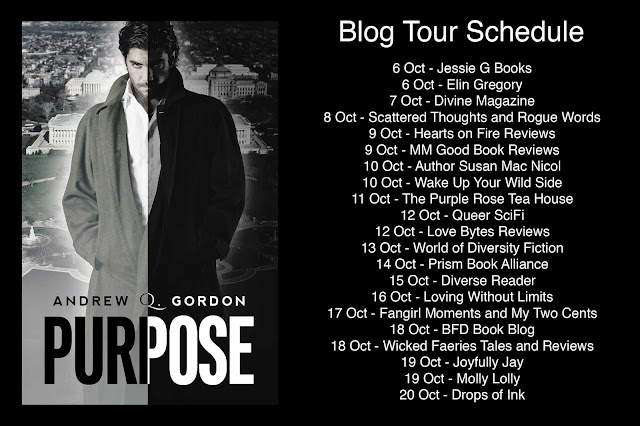 Click on the Rafflecopter Link or Enter on the RC below for a chance to win one of the following.

The tour organizer will select a winner from entries received as of close of business 21 October.  Be sure to leave a thoughtful comment on each stop on the tour for additional chances to win.