Roping Him In by Jena Wade - Book Blast with Giveaway 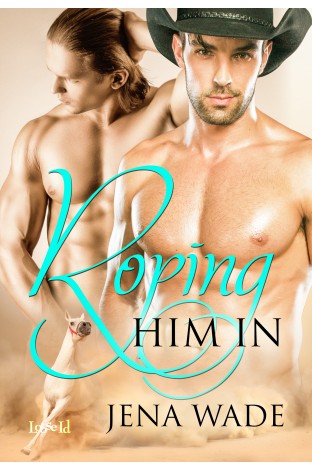 Lucas and Jason have been roping partners for five years and this year, together, they are going to win it all. Nothing is going to stop them. Their attraction to each other and fear of being outed keeps them from pursing their dreams.

One night of passion puts a road block in Jason’s plans to win the title. A title he desperately needed.
Lucas never dreamed Jason would still want to ride with him after their night together. They could compete together, but rules needed to be set to protect his heart. Then again, rules were meant to be broken.

LUCAS STOOD COMPLETELY still, intent on making good on his challenge. With every fiber of his being, he wanted to run and hide from what he’d said. After five years of thinking about kissing Jason, it was hard to believe he’d said it out loud.
Arousal flared in Jason’s eyes, and Lucas heart rate sped up. Holy shit. This is actually going to happen.
He parted his lips in anticipation.
Moving faster than a stubborn calf from a lasso, Jason wrapped his arms around Lucas’s shoulders and pulled him close. “You asked for it.”
Damn right he had. He’d wanted to ask for years.
Jason’s lips descended on his. The world stood still. Fireworks flashed behind Lucas’s eyes. It was just like in his dreams. Only better.
For a moment, Lucas lost himself in the kiss. He delved nto Jason’s warm, welcoming mouth and moaned. Nothing in the world should taste this good. Jason was pure ambrosia. Desire like he’d never known before, or even thought possible, fired within him.
With each passing second the kiss got deeper and faster. Lucas pulled at Jason’s shirt, intent on touching the bare skin underneath. Jason didn’t resist, which only spurred Lucas forward.
He ground his hips against Jason’s and shoved the two of them against his truck.
Jason pushed at his shoulders, and Lucas whimpered as the kiss broke.
“Holy shit. That was amazing. Better than I expected.” Jason reached down and adjusted himself through his jeans.
Lucas nearly groaned. He wanted to touch Jason’s hard cock.
“I think we ought to take this back to the hotel,” Jason said.
Blood rushed to Lucas’s cock. Was this for real? Was Jason serious? Or was he teasing him? Jason had never been the most serious person, but he wasn’t cruel.
The look in Jason’s eyes said yes, he was very serious.

Jena lives in Michigan with her husband, two dogs, and one brand new baby boy. By day she works as a web developer and at night she writes. She was born and raised on a farm and spends most of her free time outdoors, playing in the garden or tending to her landscaping. 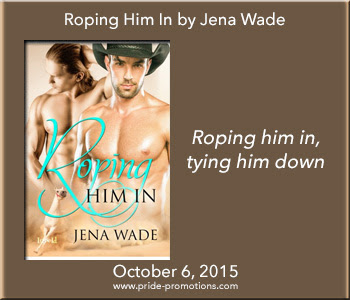 Rafflecopter Prize: E-copy of ‘Roping Him In’