The Selkie Prince and His Omega Guard by J.J. Masters - Book Blast with Excerpt

It is a standalone story but within a series

An alpha prince ready to find his fated mate. A Selkie who wishes he wasn’t omega-born...

Unlike his brothers, Prince Adrian, the dutiful second-born son to the King of the North, looks forward to finding his true mate and producing an heir. Until he stumbles across a beta guard with an enticing scent.

Del never wanted to be an omega. All his life, he’s only wanted one thing: to serve as a Royal Guard. Though forbidden, he found a concoction to mask his omega scent and was successful until his dwindling supply caused the alpha prince to discover his deception.

Rian not only breaks every cherished royal tradition, but ends up hiding Del until he can figure out the reason for the attraction between them. However, one selfish mistake puts them in a precarious position they can’t escape. Their reckless actions have them worried they’ll be banished from the Selkie community. Rian needs a plan to convince his father to accept his mate before he has to risk everything he’s ever known and loved for their future. Because, no matter what the king says, Rian will not give up Del.


Note: A 60k-plus word m/m shifter mpreg story, this is the second book in the Royal Alpha series. Due to the “knotty” times in this book, it is recommended for mature readers only. It can be read as a standalone and, of course, has an HEA.

Prince Adrian, the second born alpha son to the King of the North, frowned. As he stood near the throne where his father sat with his four brothers flanking him, his gaze bounced off the six omegas that had their foreheads pinned to the stone floor and their naked asses presented in the air.

He sighed quietly in disappointment. Not one of these omegas was his fated mate. The Selkie Seekers had gathered these males from good families all over the world, but none of the half dozen presented today belonged to him.

Rian—as his brothers liked to call him—glanced over at Luca who stood with his pup, Dylan, at the back of the Great Hall, bouncing the baby in his arms to keep him from fussing. He reminded himself that it had taken his oldest brother, Kai, several presentation ceremonies until he found his fated mate.

This was only Rian’s first. But still...

Unlike Kai, Rian had always preferred the Selkie traditions and he looked forward to finding his true mate and producing an heir. He was tired of rutting with the betas they had at their disposal. And to even think about rutting with a human...

He wrinkled his nose. His brothers may very well enjoy the sexual release the human males brought, but Rian refused to join them. He was a Selkie prince. He would rut only with another Selkie.

He found humans to be boring and figured none of them would be able to take his size anyway. As his brothers liked to point out time and time again, Rian was big. Most alphas were, but his was... extraordinary. As his younger brother Zale liked to call it... a dinosaur bone.

Not even all the betas could accommodate him. He knew which ones could and tended to use them for relief when needed.

He wrinkled his nose again, but this time it was for another reason. A sweet scent pulled at him. And it wasn’t coming from any of the omegas kneeling on the ground before him.

His eyes flicked back to Luca. Then he twisted his head and glanced over his shoulder at Kai. “Is Luca due to come into oestrus soon?”

Kai’s blue eyes narrowed as his gaze shot to his omega mate then back to Rian. “No.”

Rian inhaled deeply trying to pinpoint what the smell was and where it was coming from. “Do you smell that?”

Before any of his brothers could answer him, this father, the king, loudly pounded the end of his scepter onto the floor at his feet.

“Douglass! If Prince Adrian cannot identify any of these omegas as his fated mate, then let’s get this wrapped up.”

His father’s asshole assistant fluttered down the steps from where he’d been standing behind the king, and approached Rian.

Rian frowned at the weasel-faced beta servant. “What?”

“Has none of them caught your fancy, Your Highness?”

Rian let his gaze wander over the six naked males all bent over in a line. “None of these are my omega, Douglass. You may dismiss them all.” He tried to keep the disappointment out of his voice, but it was a struggle.

With a nod of his head and what curiously looked like a satisfied expression, Douglass clapped his hands, had the omegas rise to their feet, and herded them out of the Great Hall.

Rian couldn’t help but take one last look at the naked males. All were from acceptable families, all very handsome and some were even hung very well for an omega, but even if he was sexually interested in any of them, he was forbidden to rut with them.

Doing so could throw an omega into heat and with heat came pregnancy and then Rian would be stuck with an omega who was not his intended fated mate.

All for a quick dalliance.

Rutting for pleasure with an omega would also ruin the omega’s reputation. Omegas didn’t have to come to their mate with their corona membrane intact, but no matter what, they couldn’t rut with an alpha unless it was their mate. To do so was illegal and could mean imprisonment. Or worse, banishment. 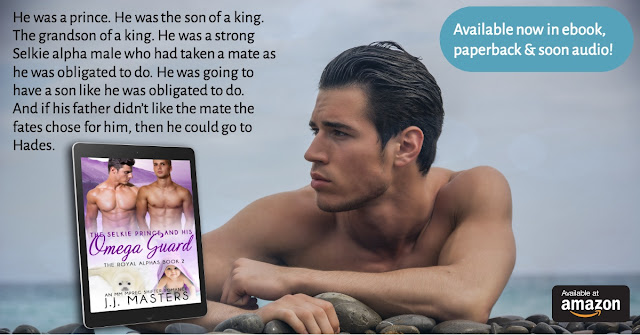 J.J. Masters is the alter-ego of a USA Today bestselling author who writes hot, gay romance filled with heart, humor and heat. J.J. became fascinated with mpreg romance as soon as she figured out what mpreg stood for. She loves to write about "knotty" men!

You can join JJ’s FB Group or subscribe to her newsletter to keep up with exclusive content and news.