TOO HOT! by Avery Giles - Blog Tour with Author Guest Post and Giveaway 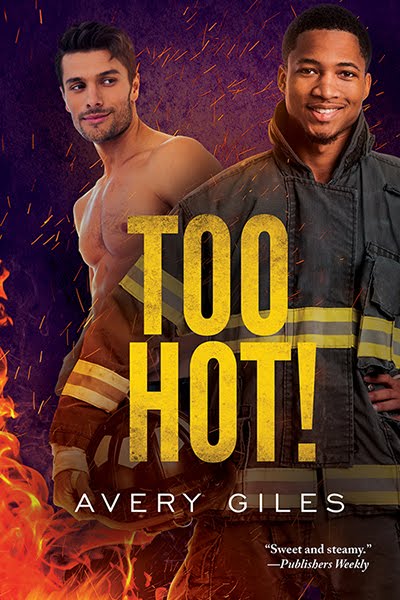 Nice to meet you, everyone. I’m Avery Giles, and I’m here to promote my smoldering debut novel, Too Hot! Follow my blog tour to for a glimpse into my writing process AND a chance to win a $10 Riptide gift card.
About Too Hot
Sparks aren’t just flying . . . they’re catching.
Eli Johnson is not a hero. He’s just a guy who’s doing his best. His mother was a hero, though, and when she died, he dropped out of college to become a firefighter—a vocation she would have been proud of. He might not be able to save everyone, but he can do what she taught him: put more good out than bad.
Charlie Kinnear is definitely not a hero. When he ran into a burning building to save a trapped child, he was acting on instinct. He’s not expecting a medal, or for a handsome firefighter with a stunning smile to give him his oxygen mask. Charlie’s light-headed, and not from smoke inhalation.
Right as their romance begins, a serial arsonist terrorizes the city. As if that weren’t bad enough, Charlie appears at the scene of every fire. Eli hates to think it, but if someone wanted to get a firefighter’s attention—say, a certain sexy someone who coincidentally wandered into Eli’s life—what better way than by starting fires? Sparks are flying all right, and things may get too hot for Eli and Charlie to handle.
https://riptidepublishing.com/products/too-hot

Obviously, Too Hot! is the story of Eli and Charlie, but there are a number of endearing side characters in the novel whom I had an absolute blast writing. You might have noticed that I refer to Eli exclusively as a firefighter and not a fireman. That’s because “firefighter” is both correct and the proper way to refer to Eli’s best friend, Anette. She’s a young black woman who works on Eli’s squad with him. A small part of me thinks she’d leap out of the pages and beat me up if I dared to refer to her differently. She and Chief Sappenfield—Eli’s forty-something Latina Battalion Chief—are both tough ladies. I had so much fun fleshing them out and showing them to be both dedicated professionals and varying friends.

Hands down, however, my favorite side “characters”, so to speak, are Eli’s cats. He has three of them named Moxie, Chutzpah, and Pistol. They serve as confidants for Eli and occasional comic relief. They also have distinct personalities that actually play into the plot of the novel at times, particularly in the case of Pistol.

Plus, I just think their names are total fun!

About Avery Giles
Avery Giles is a brown-eyed, fair-haired, moss-covered swamp witch who subsists on energy drinks and the hearts of her enemies. Her day-to-day routine involves waking up, writing three sentences, staring at those three sentences until her brain tells her why they're wrong, watching eighteen hours of Netflix, and luring bandits away from the safety of the well-lit path. If asked about her favorite books, she'll mention the Percy Jackson series, Good Omens, and the blackened scroll on which she detailed an encounter with a crooked librarian that led to two marriages and a beheading. She enjoys eating Italian, French, and German lovers after mating with them.
Connect with Avery:
Giveaway
To celebrate the release of TOO HOT! one lucky person will win a $10 Riptide Publishing gift card! Leave a comment with your contact info to enter the contest. Entries close at midnight, Eastern time, on October 13, 2018. Contest is NOT restricted to U.S. entries. Thanks for following along, and don’t forget to leave your contact info!