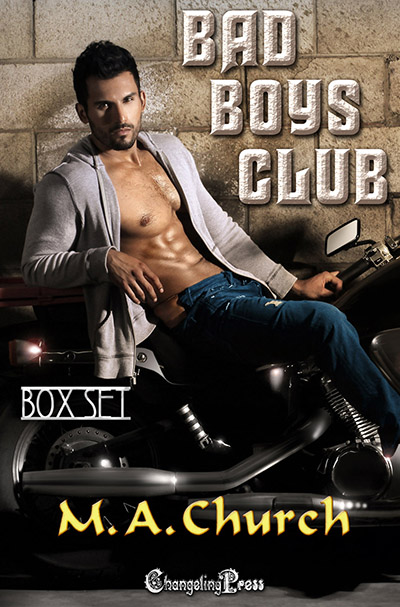 Blurb:
Not all romances are sweet and fluffy.
Pounding music and writhing bodies fill the dance floor at Night Moves. A small, very elite group of friends called The Bad Boys Club use the place as their personal hunting grounds. Spoilt, powerful, and totally amoral, they use men without thought for the consequences of their actions. But each of these predators harbors a secret desire, a passion, that drives him.
And it hasn't gone unnoticed.
Three dangerous paranormals on the prowl for a mate stalk the humans. Dark and deadly desires are their calling cards. A demon prince, an ancient vampire, and one of the deadliest werewolves to exist have their sights on The Bad Boys Club and their sensual secrets. Love comes in all forms, even for unscrupulous humans and lethal paranormals.
Publisher's Note: Bad Boy's Club contains the previously published novellas Lust and Ice, Into the Darkness, and Haunting the Night.

Excerpt from Lust and Ice
"You have the devil's own luck," Jordan groaned.
"Actually, that's Kain. I'm still behind him by two virgins."
"How do you find these guys?" Allen complained. "I've only managed to find two!"
"Oh shut up. You're one ahead of me." Jordan rolled his eyes.
"Back on subject, fellows. Did I mention how sweetly he cried?" Hugh smirked. "And get this... he's thinks I'm going to keep calling him now, be his boyfriend. Seems like he was waiting for that special someone, the love of his life."
"Yeah, right. What a loser." Allen sneered. "How often did you have to tell him you loved him?"
"Too many times." Hugh's disgust was clear as he raised his glass and winked. "Like I'd be caught dead outside of a bedroom with someone like that."
"Goes without saying." Kain sprawled in his chair. "So, how's it looking down there? Fill me in."
"Jordan and I have a bet going about who's going to do that redhead on the dance floor first," Allen said. "He's the one with the green shirt, there in the middle."
"Why not do him together?" Hugh asked.
"We plan to." Allen winked. "I said I'd do him first. We'll tag team him later. Been awhile since Jordan and I got to do a double penetration."
Kain's hearty laugh boomed out, drawing attention from those around them. "I almost feel sorry for the guy." Kain glanced around the group; several pairs of disbelieving eyes stared back at him. "Okay, no I don't."
"The legendary Ice feels sorry?" Hugh's lips twisted. "That'll be a cold day in hell."
"Hell wouldn't have me."
"Oh yeah, it would. Personally, I think we'd end up ruling hell." Allen smirked at Kain.
"Ah, someone has that position, remember?" Jordan shrugged.
"We could be kings, or lords."
"There's supposed to be seven princes of hell. One for each deadly sin." Hugh rolled his eyes as his friends stared at him. "What?"

Excerpt from Into the Darkness
“Same plan as usual?”
Allen waited until Jordan turned and looked at him. “Why mess with what works? I’ll move in first, then you come in after I set him up. We’ll get him all hot and bothered, then take his ass home. I bet we have him in bed before the hour is out.”
Jordan slapped Allen on the back. “I agree. If it isn’t broke, why fix it? Although it would be nice, for once, if our marks didn’t just fall to the floor and puddle at our feet.”
“Are you nuts? Besides, what do you expect out of these sluts?” Allen shrugged. “And by the way, I will fuck him first.”
“Keep telling yourself that. Got a feeling he’s going to beg me to do him first.”
Allen rolled his eyes. They’d just see about that. “My place or yours this time?”
They lived just a block apart. Allen had tried to buy an apartment in the same building as Jordan, but there had been nothing available that was as nice. Allen ended up purchasing his own place as close as he could to Jordan.
Jordan shrugged as he searched the dance floor. “Doesn’t matter to me, but my place is probably cleaner. The maid came yesterday.”
“Fine by me, we’ll do him at your place then. Besides, you have more toys. And a bigger bed.”
“Thought you took care of that little oversight?”
“My new bed will be arriving next week. Plus, I want you to go with me to check out some of the toys I found at this new place that just opened up. You have a better feel for things like that.”
“Competitive asshole.”
Allen chuckled. “Pot… meet kettle. You went out and bought a new BMW just because I got one. I’m not even going to mention the hair.”
Jordan shrugged, then stepped aside as someone -- a tiny blond who looked entirely too young to be allowed in the club -- passed him. “I liked yours better. Hey Allen, did you see that little blond twink?”
Allen raised an eyebrow as he looked in the direction Jordan indicated. “Hmm? No, I didn’t. But a blond? Really? Are you feeling okay?”
“Not for us, you shit. I was thinking that was more along the line of what Hugh likes -- young, sweet, and innocent. Even though he doesn’t look old enough to be in here.”
“Playing matchmaker now, are you?”
“Fuck off.” Jordan laughed as he pushed Allen toward the dance floor.
Excerpt from Haunting The Night
Hugh sat at the table watching as Kain, Jordan, and Allen made their moves on the prey they’d picked out. He’d checked the dance floor, and not one guy he saw impressed him so far. He needed a change -- something or someone to break the monotony. With a sigh, he picked up his glass. Before he could take a drink, that feeling of being watched hit him square between the shoulder blades again. His shoulders tensed and chill bumps broke out over his flesh.
“What the hell?” While he was used to being stared at, and even got his own fair share of attention from the paparazzi, this was different. More intense, more… threatening, almost. Unease flooded him, and he couldn’t shake the recurring feeling of danger. Hugh glanced around, but didn’t see anyone taking an undue interest in him. Maybe a family member of one of the defendants they’d gotten off was stalking him. Hugh dismissed the idea immediately; that was just silly.
More likely his old man had someone keeping an eye on him. Now that he could believe -- the nosey old bastard. “Fuck this.” The whole night had been off from the get-go, and he’d had enough. He rose, with every intention of leaving, when the overhead lights spotlighted someone at the bar below.
“Well, hello,” he murmured as he stared at the young man at the main bar. Jesus, how had he missed this one? He was perfect. Damned if he was leaving now. The night was suddenly looking up.
Dressed simply, in faded jeans, a black T-shirt, and a leather bomber jacket, was a stranger, one of the most gorgeous men Hugh had ever seen. He was everything he wanted in a man -- cute, small, and blond. The perfect twink. Actually, the tiny blond looked entirely too young to be in Night Moves, but he was sure the guy wouldn’t be allowed in if he was underage. To make things even better, his target was staring at him. Even from this distance, he could see the hunger dancing in the stranger’s eyes. He was a little more blue-collar than Hugh normally went for, but what the hell. Hadn’t he just been thinking he needed a change?
“Yeah, why not?”
Hugh had taken no more than a few steps when the man at the bar winked at him. Most of the twinks he picked up were either drama queens or shy little guys. There was certainly nothing shy about this man. Hugh raised an eyebrow. He’d have to show the stranger who was in charge, of course, then they could have some fun. At least it looked like he wasn’t going to have to put out much effort tonight, and that suited him just fine. Hugh made his way downstairs to the main bar and to the guy waiting on him.

She was a finalist in the Rainbow awards for 2013. Drop by her blog at http://machurch00.blogspot.com/ 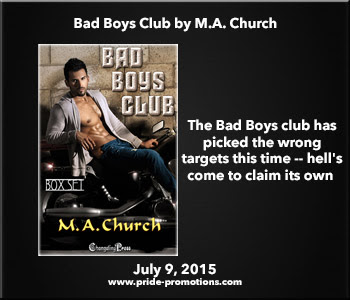 Rafflecopter Prize: One ebook from my backlist and a $25 Amazon GC