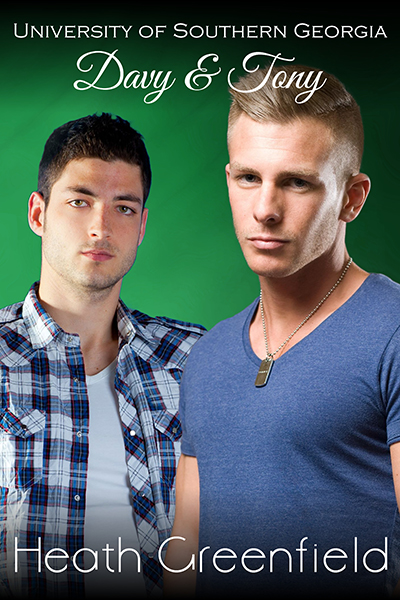 Love is a funny thing…it happens when and where you least expect it.

Tony has been having a rough couple of days. His dad caught him with a dirty magazine, which would have been embarrassing enough. But when his dad realized it was a gay magazine, he chased Tony down the street. Luckily, Uncle Alfonso and Aunt Luciana have taken him in. Now, he’s out to the world, going to school during the day, and working in the family restaurant at night.

Davy has become what he always dreamed of being: an Army Ranger. He loves everything about it. He’s assigned to Fort Benning and works as an analyst. He also happens to be gay, but even with the repeal of Don’t Ask Don’t Tell, he’s careful not to let his personal life get in the way of his professional goals. His friends know, but he’s never introduced them to anyone he has dated…until he meets Tony, who changes everything.

Between their sexual chemistry and their deepening friendship, their love seems fated, but when Davy is about to be deployed, he finds out something that rocks him to his core and makes him doubt both Tony and himself. He’s left wondering if he’s strong enough to win this battle.

Monday morning dawned with red in the sky.
Rolling himself out of bed, Davy dressed in shorts and a T-shirt and went for a run. The park, woken by the sun, stretched out in early morning beauty. The birds called revelry, and the squirrels their chattering. The park was large enough to encompass several trails, and it was made up of gentle, rolling hills. The trails were smooth and kept mulched to encourage walkers and joggers to use them. The trails intertwined liberally with the sidewalks and, with them, little stands where food carts met the needs of the morning rush. He thought it was an odd but comfortable intersection of those enjoying time away and those rushing to get somewhere.
Davy's muscles uncoiled as he ran. His strides lengthened, and joy filled him as endorphins rushed throughout his body. He was master of his fate.
He passed a few early morning joggers, then saw a runner whose path was merging with his just ahead. Not jogging, but flat out running as though hellhounds were loosed upon him.
As their paths met, Davy realized that it was Tony…the elusive librarian/waiter. His face was plagued with sorrow, and his pace ate away at the ground. Tony pistoned around each curve chopping away at the distance. It looked like his body was an automaton separate from his mind.
“Hey,” Davy called out. “Tony, wait.”
At first, nothing happened, but then, as though the words had needed time to sink in, Tony turned his head toward him. Davy was shocked to see a black eye and jagged scrapes across Tony’s cheek.
Tony slowed and stopped. He looked so lost.
Davy’s heart ached at the pain in Tony’s face but he stayed quiet for the moment and nodded toward a coffee stand off to the side of the path where it joined up with the sidewalk. Tony hadn’t said a word…he just sort of floated to the sidewalk beside him.
He ordered two coffees and when Tony indicated, doctored up one with milk and sugar. Walking over to a grassy rise off to the side of the walkway, he waited for Tony to sit. Tony stretched out his long legs.
“Here.” He handed him the coffee, then sat down next to him.
“Thanks.”
They sat there silently for about ten minutes before he had the ability to speak.
“What happened?”
Tony laughed, a slightly high pitched noise that held no humor.
“My dad…he doesn’t approve of my…life choices.”
“Mm.” Davy grunted, but he kept still.
“He doesn’t want a faggot for a son.” Tony slid his gaze sideways as if to assess Davy’s reaction.
“That’s rough,” Davy said, but he bit back more.
“Sorry if I shocked you,” Tony said.
“Of all the things I am, I’m not shocked.”
“No? Then what are you?”
Davy gave him his own assessing glace. He smiled a little. “Glad.”

About the author:
Sharing adventures, love, passion, and even sadness informs us as humans. That’s what motivates Heath Greenfield’s writing. Heath sits at the computer in Daytona Beach and wishes thoughts could just flow straight onto paper. Assisted by two cats, a schnauzer, a boxer, and the best mutt ever, the author gets to write novels…and considers it the best job ever! 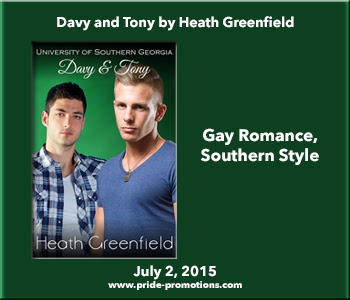