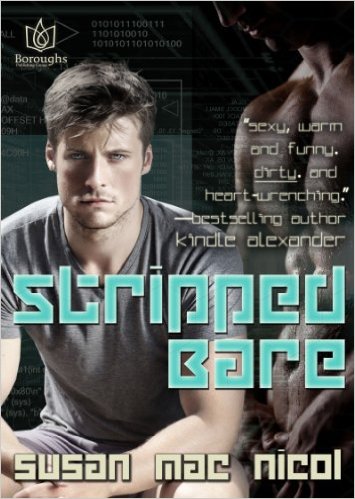 Now that Shane Templar has stripped the armour from Matt Langer’s heart, will either of them ever be safe again?

Though two years past, Matthew Langer is still getting over the death of a loved one. He’s steered clear of serious relationships, but when he meets the irascible, dirty mouthed and tempestuous Shane Templar that decision has never been harder. Shane is sexy, warm and funny, and Matthew finds himself trying like hell not to fall for him. Especially when Shane, with his quick wit and hacking skills, is quick to stand up for justice and avenge wrongs. Then Shane strikes at the wrong target, and Matthew realises just how far he’s already fallen. At the threat of losing for good yet another man who has broken through his armour, Matthew finds his heart stripped bare. He must face the demons of his soul or a future without love.

Matthew raised an eyebrow . “Are you with him tonight as a paid escort, or a free date?”

He knew even as he said the words that he’d gone too far. To be honest, he was ashamed at the words even as they left his mouth.

For a moment, Matthew thought he was about to be smacked across the jaw. Instead, he found himself being pushed against the wall, Shane’s greedy lips finding his in a kiss that made him rock hard. Matthew couldn’t help himself.
His lips parted involuntarily as Shane’s hungry tongue crept into his mouth, meeting his own as his body pressed against Matthew’s in sheer carnality. Matthew tasted whisky, mint and pure sex.

The younger man knew how to kiss. His lips were demanding and warm and his tongue definitely knew what it wanted.

All sense of anything rational left him as the other man’s hips pushed against his. Matthew lost all breath in his body feeling Shane’s raging erection against his own. He groaned and gripped Shane’s blonde hair as he ground his mouth against the other man’s in a frenzy of sheer need and want.

Shane’s hands were on his backside, gripping him fiercely, pulling their two bodies together.

Christ, he’s a great kisser. He must be total dynamite in bed. God, I want this man.

The thoughts were fleeting. Matthew found himself being released and the incredible sensations in his body were relieved somewhat as Shane pulled away.

The other man’s face was dark, his eyes stormy. His lower face was reddened from the roughness of Matthew’s chin, from the stubble that grew around his mouth. Shane’s voice was fierce when he spoke. “Is that what you wanted, Matthew? It certainly felt like you did.” He reached down and brushed Matthew’s groin.

Matthew gasped. “I’d say you want me. Why the hell are you so uptight about it? Be honest with yourself.”

Matthew couldn’t quite find his voice. He took a deep breath trying to calm down the emotions surging in his chest. Shane watched him and then shrugged. His voice sounded disappointed when he next spoke. “Fine, then. You’ve had your chance. Twice. So don’t bloody well think I owe you anything.” 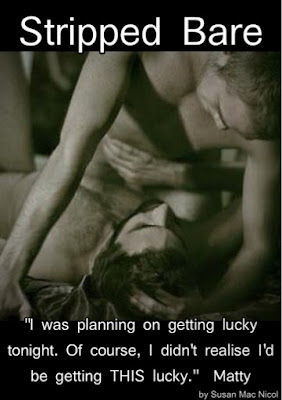 While this isn't my first book from author Susan Mac Nichol, this is her original first book that was release about two years ago. The book starts out with us meeting cheeky, mouthy Shane tied up to a bed while David is getting himself off while he watches. Shane tries to talk him out of whatever he has planned but luckily David's phone interrupts them and tosses David into an emotional wreck. Which of course causes Shane to want to make sure David's okay even though he's kind of annoyed with him over being tied up. All this leads up to something happening to David on the way home and Shane meeting David's best friend Matthew. Even in the middle of a crisis the first sight of each other has them both very attracted to the other almost to the point of distraction. This attraction sets them on a very rocky road mostly due to some major communication issues and Matthew's still getting over the loss of his husband. Even if it's just been over two years since Sam was killed in a freak accident, Matthew is still hanging on to his memories and even to the image of Sam. Shane gets under his skin though and gets Matthew to wake up and realize what's in front of him eventually. I really enjoyed Shay's way of thinking and doing things. Unfortunately a lot of times he didn't think through to the consequences of his actions and then ended up regretting many of the things because they hurt others. Matty had such a road to open himself back up to wanting to love someone and the ups and downs with Shay's hacking activities. It was sometimes hard to watch because for every door Matthew opened it felt like he slammed 3 closed when things didn't go the way he expected. In the end things worked out between Shay and Matty and they were utterly adorable yet smoking hot. There are some seriously hot sexy times between these two men and the emotions are off the chart. This is definitely one to pick up and spend a few hours or days with as you fall into what ends up being a pretty perfect relationship.

Susan Mac Nicol is a self confessed bookaholic, an avid watcher of videos of sexy pole dancing men, geek, nerd and in love with her Smartphone. This little treasure is called ‘the boyfriend’ by her long suffering husband, who says if it vibrated, there’d be no need for him. Susan hasn’t had the heart to tell him there’s an app for that…

In an ideal world, Susan Mac Nicol would be Queen of England and banish all the bad people to the Never Never Lands of Wherever -Who Cares. As that’s never going to happen, she contents herself with writing her HEA stories and pretending, that just for a little while, good things happen to good people.

Sue is a PAN member of Romance Writers of America and is a member of the Romantic Novelists Association in the UK.