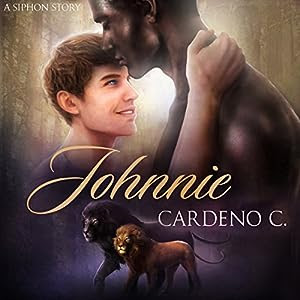 A Premier lion shifter, Hugh Landry dedicates his life to leading the Berk pride with strength and confidence. Hundreds of people depend on Hugh for safety, success, and happiness. And at over a century old, with more power than can be contained in one body, Hugh relies on a Siphon lion shifter to carry his excess force.
When the Siphon endangers himself and therefore the pride, Hugh must pay attention to the man who has been his silent shadow for a decade. What he learns surprises him, but what he feels astounds him even more.
Two lions, each born to serve, rely on one another to survive. After years by each other’s side, they’ll finally realize the depth of their potential, the joy in their passion, and a connection their kind has never known.

4.5 out of 5 stars
Johnnie, is the first book in Cardeno C.'s newest shifter series the Siphon Collection. This book takes us deep into a large pride of lion shifters, led by their Premier Lion, Hugh. Hugh's power is controlled via his Siphon, a rare born lion who's able to siphon off excess power from the Premier in order to allow him to control himself. I'll admit the start of this story was very rocky for me because Hugh was a bit of a self-important ass. As a main character, especially an alpha shifter, I expect some degree of ass-holishness, but his initial interaction with Johnnie, his Siphon, was kind of abhorrent to me. Now that was my initial reaction to his character, obviously over the course of the story it did change. Johnnie has been Hugh's Siphon for ten years, he took the position at a young age when his pride merged into Hugh's pride. However Johnnie's story, as we hear it through the book, is heartbreaking. His methods of coping with his shell of an existence made me want to break down crying. All his life people have treated him as a thing or commodity versus as a living, breathing shifter. The hardest for me was that at age 26, he didn't even have a name to call his own. He was only know as "The Siphon" and nothing else. What brings him into Hugh's attention is a direct consequence of how both his original pride, and this pride treats him/sees him. The interaction that develops between Hugh and Johnnie, after Hugh finally sees Johnnie, is what propels this story into the higher rating. That Hugh realizes Johnnie matters and begins to show him that he does matter causes the dynamic to shift. It allows Johnnie to go from being someone locked inside himself into a very strong, and emotionally stable Siphon and member of the Pride. It also shows Hugh's human side, which is rarely seen because the Pride depends on him being the strength of the group. Now for those of you that are Cardeno C fans, this book will not disappoint as it wears the author's style of writing all over it. In other words, you'll love it and want to re-read it immediately because the characters are going to grab you and steal your heart. Even if you're not a die-hard CC fan, this is a pretty powerful book both about how isolated a person can be, and the power of love and friendship to give us strength. Greg Tremblay's narration is pretty spot on for both Hugh and Johnnie. He really was able to pull the nuances in Johnnie as he went from the weak shadow he was at first to the young man who'd found his place both in the Pride and in his world.

1)     I actually studied acting in college, along with opera; but got a degree in Computer Science.
2)     My recording booth itself is only 3’ x 5’ x 6’ . . . so when I read MM romance, I go INTO the closet.  Ironic, no?
3)     It takes between 5 and 7 hours of total production time with the finished manuscript to create 1 hour of final audio.  Fiction Audio reads at about 9800 words per hour.
4)     In addition to voice acting, I have been a Whale Watching guide, a Paramedic, and a Farrier (shoeing horses)
5)     I rarely, if ever, listen to a complete book again once the production is finished.  By the time I am done, I’ve read the book to myself, read it aloud, and listened to it for editing… and I’m on to the next story.
6)     Anguish is the easiest emotion for me to portray, because a well-written script pulls you in, and it’s a completely one-person emotion – but it’s draining.  I have cried in the booth more than a few times.  Comic passages are the trickiest, because the proper timing and reaction between characters are essential.
7)     I drink an average of 1.5 liters of water per hour, while recording.  Average recording sessions are 2-4 hours long between breaks.
8)     As a kid, I lived with my family on a sailboat for a year.
9)     My personal record for most distinct voices in a single book is 73
10)Coffee, Dairy and Alcohol are all bad for the voice. . . which means I have to moderate some of life’s greatest pleasures.  (not eliminate tho, I’m not crazy)

Cardeno C. - CC to friends - is a hopeless romantic who wants to add a lot of happiness and a few "awwws" into a reader's day. Writing is a nice break from real life as a corporate type and volunteer work with gay rights organizations. Cardeno's stories range from sweet to intense, contemporary to paranormal, long to short, but they always include strong relationships and walks into the happily-ever-after sunset.
Cardeno's Home, Family, and Mates series have received awards from Love Romances and More Golden Roses, Rainbow Awards, the Goodreads M/M Romance Group, and various reviewers. But even more special to CC are heartfelt reactions from readers, like, "You bring joy and love and make it part of the every day."

Win an audio copy of Johnnie by Cardeno C.