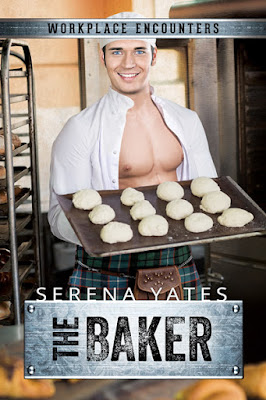 Blurb: Ian Wallace works as a baker for his tyrannical father in their family owned Scottish Bakehouse in Casper, Wyoming. He wants to represent the bakery in the upcoming Tartan Day competition, but his father refuses to reveal the secret ingredients that make them so successful—unless Ian gets married and has a son, proving he is fit to continue the family line.

Just before New Year’s Eve, Cameron Lewis, a former Marine turned police detective, comes into the bakery for donuts for his department and some black buns for himself. Cameron is hooked, and as his visits become more frequent, they stir Ian’s father’s suspicions. But threats can’t stop Ian from donning his kilt and entering the competition anyway—to show his father what he can do on his own. Though he might not have the secret ingredients, Ian and Cameron might still discover a recipe for happiness.

Just before nine things had slowed down to a manageable level, and Ian was about to take a short restroom break, leaving the store to Senga. But then the doorbell tinkled yet again, and the most gorgeous man Ian had ever laid eyes on walked into the store. He was tall, probably over six feet, had blond hair in a ruthless buzz cut, and his warm brown eyes invited Ian to trust him. The man was well built, muscular like a Marine, and wore a smart dark green suit, covered by an open black winter topcoat. His facial expression seemed guarded but curious as he looked around the store. Ian had the strangest feeling he was cataloging exits and potential sources of danger.

Thank God Senga was busy with a group of women unable to decide what they wanted so Ian had an excuse to talk to the guy.

“What can I do for you, sir?” Ian’s voice sounded suspiciously hoarse, and for the briefest moment, a spark of heat appeared in Mr. Good-looking’s eyes.

“I’ve never been to this bakery before….” The stranger trailed off as he examined Ian with the same curiosity and concentration he had used to assess the shop.

I know you haven’t. I’d definitely remember you!

“A colleague at the station recommended your stuff, so I came to have a look.” The stranger tilted his head. “You’ll probably laugh, since this is such a cliché, but I’m looking for donuts.”

“Station? Donuts?” Ian’s brain refused to function for a moment.

“Yeah, I’m a cop. Well, a detective actually, but it doesn’t seem to matter. I love donuts, and so do my colleagues.” The stranger laughed, and the deep, resonant sound thrilled Ian to his core.

“Ah. Right, well, we do sell donuts.” Ian pointed to the display. “It’s not a great selection, since most customers seem to come here for the more Scottish specialties, but I hope you can find some you like.”

“I’ll take two dozen, please.” Mr. Detective smiled. “And what else do you think I should get so my colleagues can find out about your wonderful work? It does smell amazing in here.”

“Thank you.” Ian started to put the donuts into a box and, without thinking, blurted out the first thing he could think of. “Would you like to try my buns?”

“Your… buns?” Mr. Detective’s eyebrows rose, a twinkle appeared in his eyes, and an amused smile curved his dark red lips.

“Yes. The black ones.” Ian pointed at the cakes, only to realize what the stranger must have meant when the man couldn’t stop grinning. Heaven above, was the gorgeous specimen of male beauty gay? But who else would have gotten the joke? Not that Ian had meant it as a joke. He was deep enough in the closet he didn’t know how to begin looking for the door, never mind find it. He definitely wouldn’t mind trying if this guy were on the other side, waiting for him. But Mr. Detective probably wasn’t out either, even if he were gay. A gay cop, or detective, wouldn’t make it out here in the wilds of Wyoming. Ian could feel himself blush even as he realized he was now babbling in his own head.

“Oh, I see.” Mr. Detective bent toward the black buns and grinned. “They look kinda cute. Are they as Scottish as they look with that flag painted on them?”

“Yes, they’re a traditional cake eaten during the traditional Scottish Hogmanay celebration on New Year’s Day.” Ian finished packing up the donuts, closed the box, and placed it on the counter. “Would you like to try one?”

“Yes, please. I have no idea what’s inside, but I like surprises. I’ll try to figure out what the ingredients are.” Mr. Detective looked back up. “Gives me a fun mystery to ponder.”

“Okay, I’ll get you one in a small box.” Ian wasn’t going to ask about the other mysteries, the not-so-fun ones, in the man’s life. He might be a homicide detective, and eww, Ian wasn’t going there. “Anything else I can get you?”

“Nah, I’m okay for now.” Mr. Detective grinned again. “But if your stuff tastes as good as it looks and smells, I’ll definitely be back. Can’t believe I’ve worked here for five years and have never noticed this place. Don’t tell anyone, or they’ll take my badge.”

Ian laughed as he rang up the purchase and took the guy’s money. As far as I’m concerned, you can come back anytime, Mr. Detective!

I’m a night owl and start writing when everyone else in my time zone is asleep. I’ve loved reading all my life and spent most of my childhood with my nose buried in a book. Although I always wanted to be a writer, financial independence came first. Twenty-some years and a successful business career later I took some online writing classes and never looked back.

Living and working in seven countries has taught me that there's more than one way to get things done. It has instilled tremendous respect for the many different cultures, beliefs, attitudes and preferences that exist on our planet.

I like exploring those differences in my stories, most of which happen to be romances. My characters have a tendency to want to do their own thing, so I often have to rein them back in. The one thing we all agree on is the desire for a happy ending.

I currently live in the United Kingdom, sharing my house with a vast collection of books. I like reading, traveling, spending time with my nieces and listening to classical music. I have a passion for science and learning new languages.

Once the idea for The Baker was born and the initial “character interview” had taken place (see my guest post on Love Bytes Reviews on 15 July 2015), one of the areas I needed to research was Scottish Baking. After all, the Wallace family had successfully run the Scottish Bakehouse since 1925. Surely they knew a thing or two about Scottish baking specialties.

“We certainly do.” Ian plopped himself right into my proverbial leather armchair this time. With his legs crossed I have a very nice view of his muscular thighs, only partially hidden by his kilt.
“Oh?” I’m a little breathless, not having expected anther visit so soon.
“Are you ogling me?” Ian grins.
“Well… uhm…. only in the name of research, of course.” I quickly focus on my notepad and the list of questions I wrote down earlier.
“Ah, well, can’t argue with research.” Ian winks.
I realize whoever ends up with him in my story will have their hands full. Ian’s partner will have to be a strong guy, possibly a former Marine or a detective…
“Are you with me?” Ian leans forward. “You wanted to know about Scottish Baking, I believe.”
I nod, speechless with the effect of someone reading my mind like that. Of course it makes sense he can—Ian only exists in my head for now, but still. Finally I pull myself together enough to start asking questions. “So, what are some of the typical Scottish baked goods?”

*Cherry cake, shortbread, Selkirk bannock and plain scone with strawberry preserve.
“We have some great savory specialties like Arbroach Toasties, Toad-in-the-Hole, or Haggis Millefeuille.” Ian tilted his head. “But as much as I like those, as well as the bread my father’s bakery produces, my real passion are sweet treats.”
A man after my own heart! I lick my lips.

*Scottish Black Bun
“Every year starts with Black Buns, a big part of Hogmanay. It is the celebration of the New Year in the Scottish manner, but only traditional families in Casper still celebrate it. My father, of course, has always made rather a big deal about the whole thing.” Ian smiles. “I’ve given them a new slant by making bite-size miniatures, so people can try them. They’re basically a type of fruit cake in a pastry shell.”
“Sounds delicious?” I’m getting hungrier by the minute. “What else would I find in your bakery?”

“Anything from bannocks, which are oatcakes, to brandy wafers that are great with ice cream, and citrus cake. We have an assortment of Scottish shortbread, crumpets, scones, you name it.” Ian waves his hand in the air. “You’ll have to drop by and check us out.”
Yep, I can see how that will be essential for my research!
“But that’s enough for today. I need to get back to working on cakes for the weekend.” Ian rubs his hands, then fades into nothingness before I can ask any more questions.

You can find out more about the book’s development in my upcoming guest posts during this tour (two more are planned), as well as read a total of six totally exclusive short excerpts.

Loving Without Limits
Because Two Men Are Better Than One