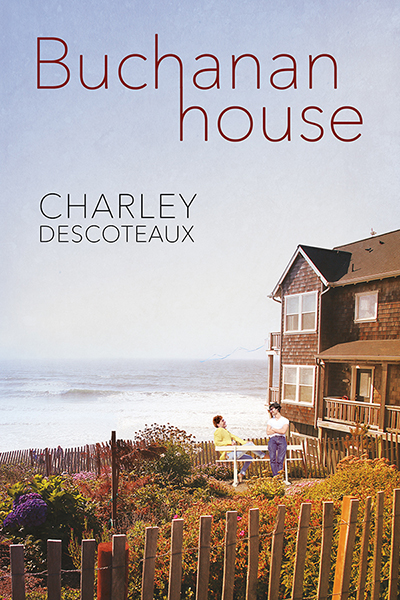 Eric Allen, thirty-three-year-old line cook, moved in with his grandmother, Jewell, after a disastrous coming-out when he was in middle school. She raised him, and he cared for her when she fell ill. When Jewell died she left everything to Eric—angering his parents and older brother. The inheritance isn’t much, but Eric and his bestie Nathan pool their money and buy an abandoned hotel on an isolated stretch of the Central Oregon Coast. The hotel isn't far from Lincoln City—a town with its own Pride Festival and named for a president—so they christen it Buchanan House after James Buchanan, the “confirmed bachelor” president with the close male friend.

Eric and Nathan need a handyman to help them turn Buchanan House into the gay resort of their dreams. Eric finds Tim Tate in the local listings and over the months leading to opening weekend Tim reveals himself as a skilled carpenter with many hidden talents. Eric falls hard for Tim, but before he can see a future with the gorgeous handyman he has to get over twenty years of being bullied and shamed by his birth family. It would be much easier if Eric’s brother Zach weren’t trying to grab part of the inheritance or ruin opening weekend.

Timothy Tate knocked on the front doors at eight o’clock sharp. Eric had barely been up long enough to start coffee, and Nathan had yet to emerge. They’d slept in one of the rooms on the first floor. The official reason was to avoid having to clean two rooms, but the unofficial reason was to talk into the night like they had back in middle school. Slumber parties for thirtysomethings. Somehow that didn’t make Eric feel any better about meeting this Tim person.

But opening the door sure did.

Tim Tate was as tall as Nathan, so six one, and he had curly black hair and eyes so dark you could get lost in them.

“Morning.” He wasn’t much for smiling, though.

Tim nodded and seemed to be looking at something behind Eric’s right shoulder. As soon as Eric remembered to step aside, Tim came in. “You bought this place?”

“Yes. Isn’t it lovely? The inspector said the bones are solid, and someone did amazing work on the rooms. Right now, we need help with the kitchen and some reno on the public areas.”

“Should tear it down and start fresh.”

“I beg your pardon. That’s a horrible thing to say. You don’t discard something just because it’s not perfect. With a little love—maybe this isn’t going to work out.”

Tim shrugged and looked around the room. His face seemed to soften into… nostalgia? It held a wistful quality, of that much Eric was certain.

“Have you been in this room before?”

Tim had turned away a little, so the left side of his face pointed toward Eric.

Is that his best side?

He didn’t answer, so Eric repeated the question, a little louder.

“Huh? Oh, yeah. When I was a kid. Sometimes the local clubs would use it for summer camps. It’s been empty for over ten years.”

“Why? I mean, did something happen here?”

“No. The owners died, and their kids didn’t want to live out here. Can’t blame ’em. Entertainment isn’t easy to come by.”

Nathan chose that moment to enter, in his pink robe with the ostrich-feather trim. He spoke quickly, almost dancing through the room and toward the aroma of coffee. “Good morning. You don’t mind I borrowed your robe? And this must be Tim. Lovely to meet you, sweetheart. Coffee, then business.” He flounced into the kitchen.

Eric and Tim watched him go. The silence in his wake stretched out a little too long for Eric, mortified by the thought Tim might believe the robe belonged to him.

Charley Descoteaux has always heard voices. She was relieved to learn they were fictional characters, and started writing when they insisted daydreaming just wasn’t good enough. In exchange, they’ve agreed to let her sleep once in a while. Charley grew up in the San Francisco Bay Area during a drought, and found her true home in the soggy Pacific Northwest. She has survived earthquakes, tornadoes, and floods, but couldn’t make it through one day without stories.