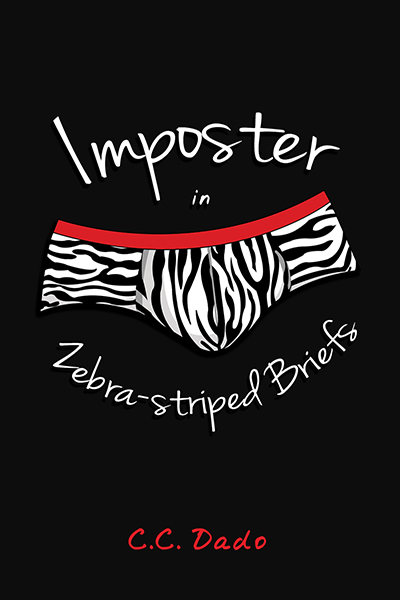 When recent college graduate Nathan Harris makes a life-changing move out from under his mother's thumb and into his own place, he is determined to take some risks. He is tired of not being good enough, tired of allowing his fears to control him.
What he thought would be an exciting adventure ends up being one jaw-dropping mishap of embarrassment after another, leaving him with a life he doesn't even recognize anymore.
His once boring, lonely existence has been replaced by a brownstone filled with colorful friends, a rough around the edges, tattooed bad boy best friend, and a stripper for a boyfriend who's not even sure he’s gay.

Ding…. He heard his phone go off again as he was grabbing an orange from the fridge. Nathan set the orange on the counter and pulled his phone out of his pocket.
Maybe I’m jumping the gun here. What are you into?
Nathan wasn’t quite sure how to answer that. He leaned back against the kitchen counter and stared at the keypad for a second before responding. Guys?
Ding…. I’m literally shaking my head at you right now….
Ding…. Josh instantly followed up his last text. I meant what turns you on about a guy. Eyes? A nice ass? I need to know what I’m working with here.
Nathan felt like the entire world could see his words as he typed his response. I think men’s feet are sexy.
Ding…  Josh responded, apparently not fazed at all by Nathan’s answer. All right then, let’s start at the toes and work our way up.

Imposter in Zebra-striped Briefs is a short (72p)read that's adorkably cute. It is related to a story that appeared in Dreamspinner Press's Grand Adventure but can be read like a standalone. Nathan is moving out from under his mother's thumb and into his first apartment. He's a bit of an awkward young man, but wants to break out of the walls he's build around himself. Moving out is just one step toward tearing those walls down and trying not to be as shy and afraid of living his life. One of the first nights he's in the apartment though he goes to a bachelor party on the room for one of the other tenants. Nathan ends up with a surprise lap dance that throws him for a loop because he's very attracted to the dancer. David, the unintentional stripper, is both surprised that he's also attracted to Nathan and that he's filling in for his brother who was too sick to work. And boy is David surprised because up until this point, he's always thought of himself as straight. The story between Nathan and David is very cute, and sweet, even if it's a short story. Unfortunately the ending left me hanging and that's why the lower rating. I actually would have loved to have had a full length story for these two because there is so much to explore with Nathan learning to be himself and making friends and also the relationship with David. So if you're looking for a short, HFN based story, this is definitely one to grab. I do hope in the future books in the series we get to see more of David and Nathan, if not even another book just on them.

I write painfully awkward, usually embarrassing, romance because long confident gazes followed by sexy dancing never happens to me.
I am a native of the Pacific Northwest, and will probably never leave since I’m a hypochondriac sundae, with claustrophobic sprinkles, and a cherry of anxiety on top. I read and write to relax my mind and I love getting lost in someone else’s story, even if it is only for a little while.

Today I’m very lucky to be interviewing C.C. Dado author of Imposter in Zebra-Striped Briefs.
Hi C.C., thank you for agreeing to this interview. Tell us a little about yourself, your background, and your current book.

I am a native of the Pacific Northwest. I'm a bit of a hypochondriac sundae, with claustrophobic sprinkles, and a big cherry of anxiety on top, so I don't travel much. I read and write to relax my mind. I tend to write painfully awkward, usually embarrassing, romance because long confident gazes followed by sexy dancing never happens to me.

Imposter in Zebra-striped Briefs is about taking chances, making friends and falling for someone that you never thought you could have.

Wicked Faerie's -   Why did you choose to write M/M stories?

C.C. Dado - It just fit in my story. I don’t think I thought too much about it until after I wrote the story. I think it’s important especially for LGBT youth to have books out there that reflect them, that are just fun, and have happy endings. I like the fact that people who probably never would have picked up an MM romance are reading and enjoying it.

WF -    What inspired you to write your first book?
C.C. Dado - I don't think I would have ever tried writing had I not read T.J. Klune’s ‘Tell Me It's Real’, his comedic delivery in that book was unmatched on anything else I had read. I was laughing so hard I was crying and I thought ‘That's what I want to do’.

C.C. Dado - Two years ago. I figured it doesn’t hurt to try.

WF -   What are you current projects?
C.C. Dado - I am just going into the editing process on “Say it with ink” the follow on book in The Seattle Chronicles series.

WF -  Off topic: What secret talents do you have?

C.C. Dado - I can ride a unicycle. Well, I used to be fantastic on a unicycle but not I can probably ride one without breaking my face. 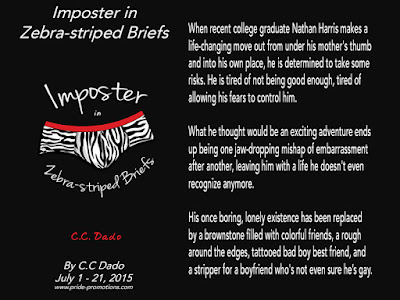 8-Jul
Boys on the Brink Reviews