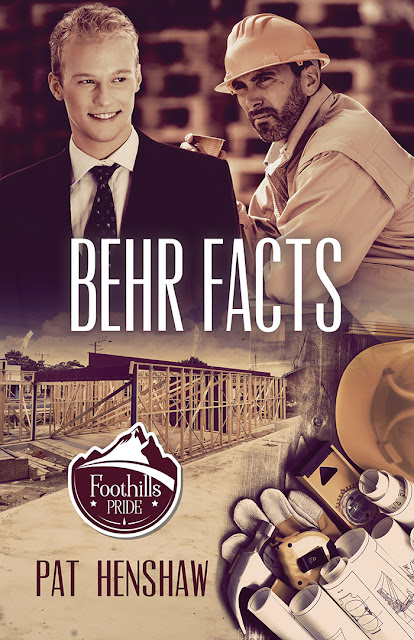 Big, burly CEO Abe Behr is dismayed to discover someone—possibly a family member—is stealing from Behr Construction, which primarily employs Behr relatives. Abe takes the unprecedented step of hiring an outsider, likeable CPA Jeff Mason, to go over the books and help find the culprit. They are drawn to each other as they talk to workers, including Abe’s two younger brothers and their shifty cousin.

Since he has sacrificed romance all his life to build the business, Abe’s surprised by his feelings for the handsome Jeff. He’s even more shocked when they are confronted by bigotry in the Sierra Nevada foothills community, which is being inundated by gays moving from the San Francisco area. As he and Jeff get closer, Abe must come to grips with coming out to a family and community that aren’t very tolerant. Fortunately, being the head Behr helps him find his footing and grab onto love when it bites him.

Excerpt:
“You ever come up the bank to sit under my tree? Looks like a much more comfortable place to fish. Not as rocky at any rate.” Jeff took a drink of his beer as I again scrambled to keep up. “My dad called it the Fishing Tree. He seemed to think fish congregated off the shore there.”

We sat in silence. It was my turn to talk. I’m pretty good in business situations. Not so much in social ones. At social events, mostly I hold up walls. Shake hands. Grunt a lot. Let others carry the conversational load.
Lorraine set our meals in front of us. The full burger with everything for him. The grilled mountain trout and steamed vegetables for me.

“You do a lot of fishing?” I managed after a long silence.

“Not really.” He gave a self-deprecating laugh. “My dad said fishing couldn’t be taught. He said it was something intuitive. I never had any idea what I was doing. So I never saw any use in fishing. I never saw any fish either.”

Again, silence as I processed and caught up. “It’s not rocket science. You figure out what kind of fish you want. Where it lives. Lure it to you. Then catch it.”

He looked skeptical and almost self-conscious. “It can’t be so easy,” he said with a little laugh.

“What about the different rods, lures, tackle, stuff?” He looked so serious, as if I were missing the point. As if I didn’t understand. He was right. I didn’t.

I lifted my hands and looked down at the mess that were my paws. Calluses, nicks, cuts, punctures, blunt fingers, the bandage now off the one with the splinter. These were the hands of a man who’d framed houses as a tall, rangy preteen and had lived in construction ever since. Could I catch a fish with my bare hands?
“Yeah. All it takes is absolute stillness and patience.” I sighed. “Not a whole lot of people have both together. Somebody once told me it’s all about Zen.” Somebody else said the only reason I could do it was because I was too stupid to know it was impossible.

“Zen.” His tone said he was surprised I knew such a word.

“You know, like the Eastern religion,” I answered. “Though why we still call it Eastern is beyond me. It’s really Far West, not Far East to us.” I was grumbling and rambling. Avoiding for some reason.

He was studying me as intently as I was him. He appeared too beautiful, too perfect, too unscarred. I just hoped his accountant skills were as perfect as he looked.

“What kind of fish you want to catch?” I asked. Staring at him wasted our time.

He pointed his fork to my plate. “How about that? It’s good, right?”

“Trout,” I agreed. “Lots of different kinds of trout.”

He looked like he’d never eaten any in his life.

“This is trout from our lake. Have a bite.”

He’d finished his burger but didn’t make a move on my fish. His expression was split between wanting to dig in and reluctance to do so.

His eyes snapped up to meet mine. His puzzled stare asked if the stupid bear had deliberately made a joke or not. Then he gave a happy, hearty laugh, and his fork raided my fish.

“So? What do you think?” I asked after he swallowed.

“I think you made a great joke,” he said with twinkling eyes. “And the trout is delicious. Is this why you threw your catch back? Did you know you’d get it cooked perfectly here at the cafe?”

“Naw. I was stalking the pie. Fish was a bonus.”

“They have good pie here?”


1. What is the best gift you ever gave? 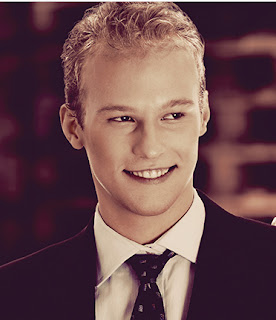 When I was about fifteen, my dad was trying to teach me how to construct a stone wall since being a stone mason runs in my family.  I was a hopeless failure.  I couldn’t select the right stones, couldn’t set them right, nothing.  Even using the mortar he’d mixed for me, I couldn’t do it.  So for his birthday, I found a kid’s kit to make a stone wall on a play scale.  I followed the directions which had numbered the stones and told me what order they went in.  It turned out great.  I said on the card to him: From Jeff.  I really wanted to make you proud, Dad.  He said I’d tried my hardest, and that was all he could ask.  He was proud of me.

2. What was your favorite subject in school?

Math.  The numbers always made sense to me.  I might not be able to pick out what stone went where for a wall, but I always seemed to know which number belonged where in a problem.

3. What is the last thing you tell your partner before bed?

I want to see you smiling in your dreams.  (And sometimes I ever do!)

Share the joy.  I’m a naturally optimistic person who’s almost always happy with his life.  I love people and want them to be as happy as I am.

5. What is your biggest strength?

Depends on what you mean by “strength.”  If you mean career-wise, it’s math.  If you mean personally, it’s my ability to get along with and encourage others.  If you mean as a partner and hopefully as a husband, it’s supporting Abe with whatever I can do to make his life easier.  I like to keep my life on an even keel, very little drama and no discord.  Maybe my biggest overall strength is making sure my life and the lives of those I love are happy and satisfying.

Pat Henshaw, author of the Foothills Pride Stories, was born and raised in Nebraska and promptly left the cold and snow after college, living at various times in  Texas, Colorado, Northern Virginia, and Northern California.  Pat enjoys travel, having visited Mexico, Canada, Europe, Nicaragua, Thailand, and Egypt, and Europe, including a cruise down the Danube.

Her triumphs are raising two incredible daughters who daily amaze her with their power and compassion.  Fortunately, her supportive husband keeps her grounded in reality when she threatens to drift away while writing fiction. 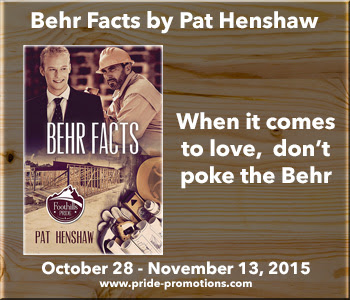