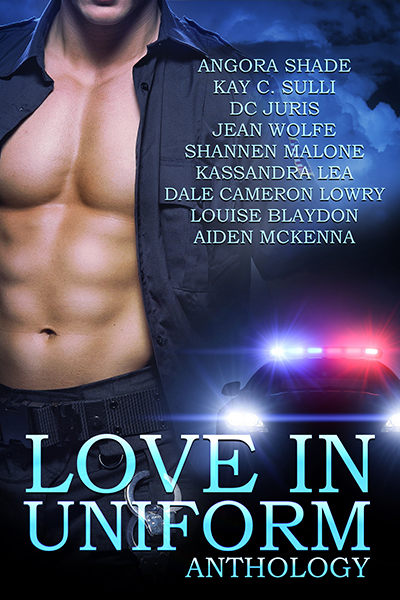 There’s just something about a man in uniform…whether it’s the delivery man bringing a special package to your door, the airline attendant taking care of your every need, or the cop with a set of handcuffs on his belt and a gleam in his eye, Love in Uniform provides fodder for every fantasy.

The Encounter - Hoping to escape the hot dance floor at a crowded club, a pilot finds himself wandering a dark secluded hallway. He’s pleased to see a table, but he’s startled when a shadow moves. Suddenly face to face with his ideal man candy, the pilot discovers the beauty of strangers and the thrill of sex in public places.

Wishing on the Perseid - Zach Johnson went looking for an adventure in the Rocky Mountains before settling into grad school. Little did he know Park Ranger Ryan Jenkins was exactly what he was looking for.

Special Delivery - An unexpected phone call turns Camden's boring day off into a potential disaster when he ends up taking his cousin's delivery shift with Axel, the tattooed hunk he dreams about. But Axel's got a plan...and a special delivery that'll leave Camden wanting more.

Westward Avenue Matchmaker - EMT Peter is getting tired of being called to Westward Avenue again and again for Mrs McKinney’s kitchen fires, but the chance to flirt with an attractive fireman makes it all worthwhile.

On the Wing - Traveling the world for work doesn’t leave a lot of time to find love on the ground. But maybe on the wing.

Let it Hurt - All Leo Shelton wanted to do was patch things up with his boyfriend Caleb Hart. When an accident threatens to take it all away the two realize just how much they need one another.

Loggerhead - Soon after they fall in love, Jake makes Eric a promise inspired by an old track uniform. But demanding work schedules at Jake’s four-star restaurant and Eric’s newspaper keep them from following through. Six years later, they take the honeymoon they never had, heading to the Florida coast in search of sea turtles—and rekindling their passion for each other in the process.

The Night Shift - Jonas Kelshiker works the night shift in the Evidence Room at the police depot, where the crimes have become monotonous and the policemen unremarkable – until the night Dan Harris shows up at his window.

Roadside Assistance - When Robert sees flashing lights in his rear view mirror, he doesn't know just how wild a turn his night is going to take. With the threat of his first speeding ticket imminent, he tries to use his clever mouth to get him out of trouble. But this cop won't let him get off that easy.

“I like this hallway,” he says, turning back to me and placing two hands directly upon me. His fingers flex over my pecs and the tips of his short nails dig playfully into my shirt. He pushes his body square against me, the movements of his breathing mimicking my own surprised and excited rhythm. Bringing his face closer to my ear, he speaks in a teasing whisper. “I prefer my company in the dark.”

I’m a little shocked at his bold and aggressive personality, but I like it. I hate how so many men I’ve been with have played the come-chase-me game, or the, I’m-only-going-to-pretend-I’m-into-you thing. This guy is different; clear intentions. No games. No jokes.

I’m about to introduce myself when he pushes me backward against the wall. I hit the brick with a genuine oof of both astonishment and force, and find my hands have shot out around his hard waist. His muscular abs flex under my thumbs, and I feel drowned by his intense gaze.

His breath falls warm against my face. “I think you want what I want.”

What I want… I want this man. Every inch of my body is ready to fly at him, twitching and pushing for release like the stiff nudge of my dick against my government issue boxer briefs. Screw Jay. He’s late and I’m feeling attention starved. I’m single and I don’t want to be.

He looks me up and down, licking his lips. “God, I love a man in uniform.”

-from “The Encounter” by Angora Shade

Angora Shade: Angora Shade is an American author living in what she lovingly refers to as "Sheep Shit Nowhere" Europe. In an attempt to add some spice to her small town life, Ms. Shade began writing explicit erotica as a form of self-entertainment. Exploring the boundaries of acceptable sexual literature, she often seeks to create stories that not only entertain others, but also expose and push against the negative stigma surrounding sex in modern day society. She believes that sex in literature, art, personal thought, and physical nature, should be celebrated and expressed openly and as easily as any God-given freedom. Her favorite themes in writing include revenge, self-discovery, alternative materials for love play/BDSM, as well as anything that produces a good tingle, sizzle, or laugh. When not writing, Ms. Shade enjoys red wine, travel, dancing, classic cartoons, baking, and creating fine art.

Kay C. Sulli: Kay C. Sulli is a queer asexual writer often found scribbling in the wilderness. She writes from the heart with a passion for history, nature, and the American West.

DC Juris: Romance author, sci-fi fan club Captain, cosplayer, reigning Queen of Monkeyland, and random menace. Yep, we're talking about DC Juris. She’s a cupcake making, football watching, rubber duck collecting, drag show loving, full of fabulous with a Capital F kinda gal. She's also an Ordained Minister and an amateur photographer. She lives in Upstate NY with her husband, three dogs, and two cats. When she's not writing, you can find her in her favorite chair watching "Star Trek" and "Supernatural" repeats on Netflix, or surfing the web for porn. Er...research. Surfing the web for research. She may speak softly but she lives and loves loudly. Just ask the neighbors.

Jean Wolfe: Jean Wolfe would really rather go hide under a rock somewhere than have to fill out author bios.

Shannen Malone: Shannen Malone is an Irish student studying English, in the second year of her degree. When not scaling the monolith of her required reading list, Shannen can be found in her blanket nest, writing all things queer.

Kassandra Lea: Kassandra Lea has been writing for far longer than she cares to admit. She lies in southern Wisconsin with her mother, a gang of furry little monsters, and a ghost lovingly dubbed Bob.

Louise Blaydon: Louise is an academic, editor and writer. She primarily writes m/m and f/f fiction, and has published a number of novels and novellas and many short stories. She lives in England and has too many cats.

Aiden McKenna: Aiden McKenna is a writer and editor living in the dirty south. When not bent over the writing desk, she enjoys time spent with family on her farm and relaxing on the porch with a strong drink and a good novel. 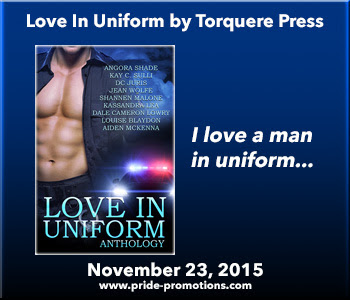 Rafflecopter Prize: E-copy of the anthology