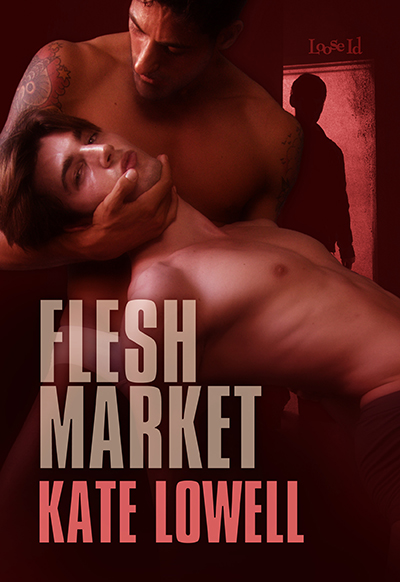 Special Agent Leo Gale is up a creek. A year and a half of deep cover is about to go up in flames. He needs help – something, someone to salvage the operation and save the lives of untold numbers of trafficked teenagers.

But he wasn’t expecting the partner they sent, or his own gut-punch of a response to the man.

Julian worked hard for that FBI Honors Internship. It was supposed to be a foot in the door. He’d never expected it to catapult him into the middle of a major undercover operation. Yet here he is, sleeping on a filthy mattress and using every trick in the book to avoid torture—and worse. He’s never felt so scared, or so alive, in his entire life, and he’s not sure if it’s the danger, or Leo, that’s making his heart race.

There’s no time to think about it, though. The operation is heating up, and Leo and Julian are running out of time and options. As choices become more difficult, they must find a way to take the traffickers down, or risk becoming just another set of organs for sale.

Inside the bathroom, DeGraff peered behind the door and moved an OUT OF SERVICE FOR CLEANING sign from the back to the front.

Julian was at the sink at the far end of the room, staring into the mirror with water dripping off his face. DeGraff stepped into one of the stalls, and Leo went to wash his hands at one of the other sinks. Julian glanced up at him, then tore off some paper towel and wiped his face dry. He tossed the towel in the overflowing garbage can and slunk past Leo with all the angsty self-consciousness of a hormonal teenager.

Leo wished he had time to appreciate the performance, but he had a job to do. As Julian passed him, Leo spun and grabbed him from behind, pinning Julian’s arms to his side and covering his mouth. Julian made a startled noise, muffled by Leo’s hand, and began to thrash. He kicked Leo painfully in the shin, but by then DeGraff was out of the stall and had jabbed his syringe into Julian’s shoulder. Leo fought the young man down to the floor while DeGraff stood watch by the bathroom door. Five tense minutes later, Julian was completely spaced out, limp as a rag in Leo’s arms.

Kate lives on the east coast of Canada, in an old farmhouse in the middle of nowhere. She has one horse now, who still has medical issues, and three cats, all of which still have mental issues. She still refuses to get a dog, because who knows what would be wrong with it?

Kate loves to read and write. She also likes playing with computers and is going back to school to do a programming degree, just for giggles. Or the opportunity to take over the world. (Oh, who are we kidding? Think of all the work that would mean.) She also likes pictures of pretty men and keeps many of them on her computer. (The pictures, not the men.) She would dearly love a cabana boy to mow her lawn and maybe rub her shoulders after a long day of making men fall in love with each other, then cackling evilly and raining frustration and danger on them. 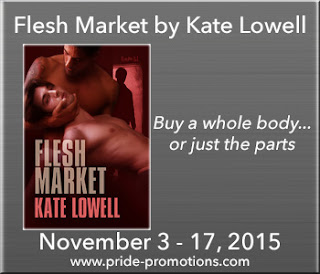 Rafflecopter Prize: E-book copy of one of the recommended reads Kate used in her research for Flesh Market.