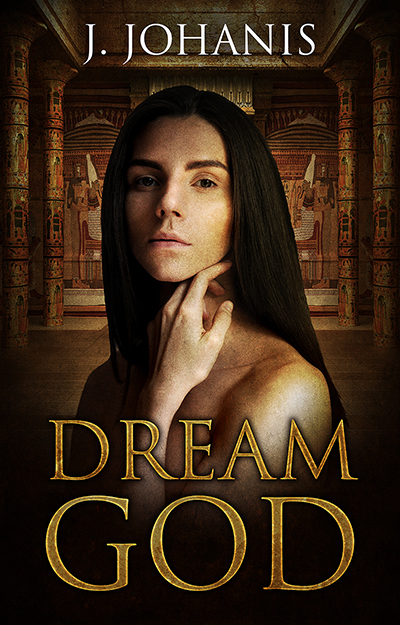 For the first time in three years, Aya is finally free, but with his freedom comes the pain of all he’s lost. Seeing Akad and Marduk together makes him realize how badly he has messed up. By betraying Marduk, he ruined his chance with the one god he desires more than anything.

Aya needs time to heal and put his world back together, but the trial against the Order looms over him. As the trial begins, Akad, Marduk, and Aya are ensnared in a web of jealousy, backstabbing, and cut-throat politics.

Were they crazy to think they could stand up to the Order? If the gods of the Order can still rip their lives apart, their chances of receiving justice may be next to impossible. But if they fail to bring the Order down, Aya may never be free from their grasp.

A moment later, the fierce god Anshar appeared from an adjoining room. Feeling small in his presence, Aya lowered his eyes and shifted his weight from one foot to the other. When the black-bearded god stopped before him, color flushed into Aya’s face. Anshar inspected him from head to toe, and Aya became acutely aware of how he was dressed. With his long white skirt, kohl lined eyes, and straight black hair flowing down his back, he probably looked more feminine than most goddesses. He’d never appeared before the gods dressed in this manner, but this was who he was.
Anshar ran a hand over his full beard, his lips curling into a sneer. Aya folded his arms over his bare chest and took a deep breath.  He wished he could escape Anshar’s scrutiny.
“You’re going to your hearing dressed like this?” Anshar gestured to Aya’s skirt.
“This is how I dressed before the Order took me. I only wore a tunic because Seth forced me to do so. He forbade me from lining my eyes with kohl and never let me dress how I liked.”
Anshar stared at Aya for a moment longer, his expression skeptical, then shrugged. “Very well. Do as you like, but before we go, I must warn you that the hearing will be held in Siren’s temple. Her powers are intense and can be felt well before you stand before her. For older gods, her powers act like a strong aphrodisiac. We are able to take being in her presence. However, for younger, weaker gods, her powers inflict overwhelming arousal. It will be so severe that you won’t be able to function in her presence. You’ll be paralyzed with desire that will cut into you like a knife until it’s alleviated.”
Aya furrowed his brow. “But… I’ve never desired a goddess. I’ve only been with gods.”
Anshar smirked. “It doesn’t matter whether you desire gods or goddesses. She emanates lust, and it will be too much for you to handle. The only way to counter it is with sex. So, before you are presented to her, I’m going to have to fuck you.”
“What?” The color drained from Aya’s face. The idea of this fierce bearded god driving his cock into him made Aya’s hole contract and his knees go weak. The thought of Anshar coming inside him made him feel like he was going to piss.
“No, I…” Aya couldn’t breathe. He shook his head, taking a step backward. He couldn’t allow Anshar to touch him in that way. Aya’s arousal unsettled him, and he suddenly felt like he was going to be sick. Akad’s father couldn’t fuck him. He couldn’t.
As Anshar watched Aya’s retreat, anger flickered into his dark eyes. “Aya, I have no desire to fuck you, but we have no choice about the matter. If I don’t do it, you won’t be able to stand before Siren, let alone speak to her.”
“But I … My servant can do it.”
“Your servant is a mortal!” Anshar snapped, his jaw tense. “His semen will do nothing for you. You’ll need to be fucked by a god! Furthermore, I wasn’t asking for permission. I’m telling you what’s going to happen. Now, follow me and I don’t want to hear another word of protest.”
Anshar stormed out of the room, but Aya felt too weak to follow. How could he let this god fuck him? Tears came to his eyes. Too many gods had bent him to their will. He wanted it all to be over. He wanted to give his body to whom he chose and no one else. Aya took a deep breath. He was faint. All the blood had drained from his head, and he wavered, grabbing a chair to steady himself.
Aya shook his head, doing his best to gather his courage. He had to be strong to get through this. Once the trial was over, he could start over. His body would be his own once again. Testifying against the Order was the only way he could gain his freedom once and for all. Aya finally made his feet move, and he followed Anshar out.


Today I’m very lucky to be interviewing J. Johanis author of Dream God
Hi (name), thank you for agreeing to this interview. Tell us a little about yourself, your background, and your current book.

List story ideas you hope to tackle in the future.

In 2005, I wrote my first book to completion, and then decided I didn’t like it. I realized that one major problem was the book should have been two books. This story is set in the Early Middle Ages and is a continuation of the S-Gods series. Since I’ve done so much research on the period, I look forward to rewriting the books. 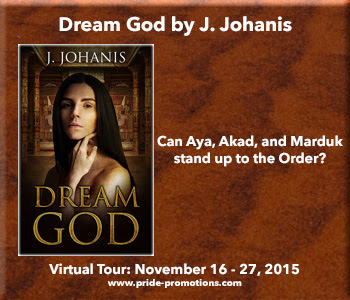 Rafflecopter Prize: $20 gift card and E-copy of book one in the series