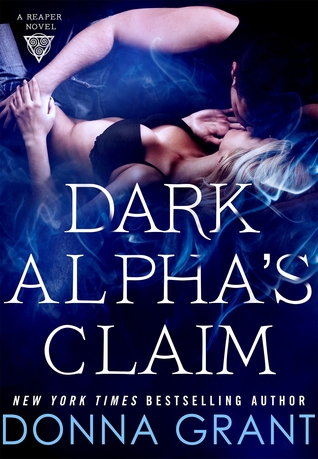 There is no escaping a Reaper. I am an elite assassin, part of a brotherhood that only answers to Death. And when Death says your time is up, I am coming for you...

My whole existence is based on taking what Death wants. Born to eliminate Fae guilty of unforgivable crimes, my reckless, wild nature makes me the perfect assassin to carry out Death's bidding. I've seen more sinister and violent dealings than anyone could ever imagine. But it was the sight of her face that stopped me cold. I've never wanted a woman-never mind a human-so badly; never felt my heart, hardened by death, burn brighter and hotter until it burst into flames. She is everything I desire. The kind of woman that compels you to stake your claim on her, to let the world know that she's yours. A Reaper saving her life will only attract danger, but I vow to protect her at all costs from the Fae that hunt her, and keep safe the woman who has claimed me, body and soul.

Baylon was sitting on the steps outside the library watching the mortals when he saw her. She stood out amongst the humans like a star in the midnight sky.
Her beauty was undeniable, catching the attention of everyone around her - though she didn’t seem to notice. He liked the way her dark blond hair was cut short and trendy with it swept to the side in the front. A pixie cut, he thought he heard a human call it.
The mortal was tall and thin, with every curve just the right size. Her turquoise eyes were large, and there was a hint of innocence about them that drew him again and again.
She wore large earrings that brought more attention to her beautiful oval face. Her brows were thin and arched delicately over her eyes. When she smiled, she dazzled. Her lips were just wide and full enough to be alluring.
He’d laughed when he heard her mumble “jerk” to the man who hadn’t held the door for her.
He knew immediately that she had Fae blood. It wasn’t just her beauty. There was an air about her that was as distinctive as a beacon. And he was happy he found her before the others.
Baylon waited outside the library for another glimpse of her. She walked out a short time later carrying a large book. She was entranced by it. Several people had to walk around her because she wasn’t looking where she was going— she was too intent on reading.
He wanted to see what kind of book was so interesting. When he put himself in her path, he never expected to look down at a tome all about the Fae.
His shock was quickly replaced with a blinding and penetrating desire when they bumped into each other. Then she looked up at him.
He was completely taken by her, tumbling into incredible turquoise eyes.
If he didn’t speak, he was liable to do something stupid—like kiss her. His gaze lowered to her lips, an ache gripping him, begging him to take her. To taste her.
“Sorry,” she said.
Her Scots accent was soft and lilting. Beautiful, just as she was. What was it about this half-Fae that held him enthralled so? “Must be an interesting book.”
Her gaze slowly raked over him, heating his blood to such a degree that he fisted his hands to keep from touching her. Didn’t she realize she was playing with fire?
If her gaze wasn’t so guileless, Baylon would have suspected she was proficient in teasing a man to such a degree. But it was the need in her own eyes that made his cock instantly hard.
“It is.”
He glanced down at the page she was reading. “Fae, huh?”
“Research,” she said breathlessly.
Warning bells went off in Baylon’s head. Research? Did she know she had Fae blood? It was time he found out more about her. Besides, he was going to make sure none of the other Reapers found her.
“Good luck with your research.” He bowed his head and walked around her.


He then stopped and turned to watch her, wondering if she would look back at him. To his exasperation, she didn’t.