S.O.B. by J.C. Valentine - Blog Tour with Excerpt and Giveaway

Born with a silver spoon in his mouth, he’s a pretentious, obnoxious, womanizing jacka** who thinks the world revolves around him.

He wouldn’t be wrong.

A famous soccer player, his skills on and off the field have won him medals, trophies, women, and the cover of every heartthrob magazine in the country. He’s broken nearly every bone in his body and a few hearts along the way, including mine—his stepsister—and lived to tell about it.

One night changed everything, and I’ve avoided him like the plague ever since. Just long enough to finish college, to bury the hurt, and to outrun the memories. But now that’s all changed. I’m back, and there’s no more running.

My hands are supposed to be my livelihood, but now they’re my curse. Levi’s reckless ways have landed him in a sticky situation, and his father has given me an offer I can’t refuse. One month, and all I have to do is put my hands on his body. Easier said than done. The problem is, even though I know it’s bound to bite me in the a**, I can’t bring myself to say no to the s.o.b. 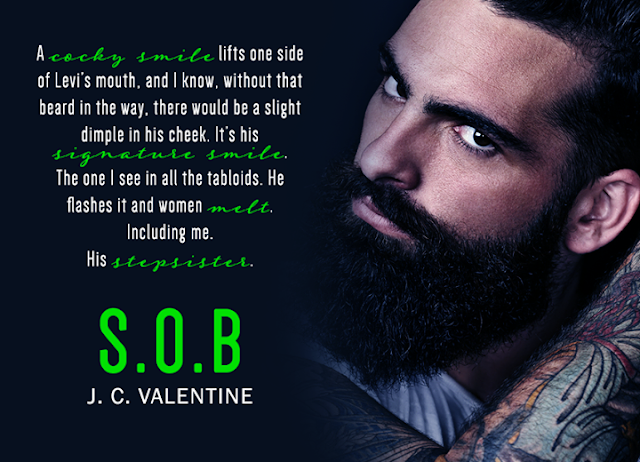 When I open my eyes, I meet hers. They’re wide and full of confusion, maybe a touch of horror, too.
“How—Why—Did we...?” She shakes her head then throws her leg over mine, scrambling off me.
I watch her as she runs her hands over her clothes and through her hair, and her expression makes me laugh. “Did you know you snore when you sleep?”
“I do not!” Snatching a pillow from the floor where I tossed it last night, she lobs it at my face, but I catch it one-handed before it can reach its target.
“You’re right. You were too exhausted to do much more than drool.”
Her eyes flare and I can tell she’s about to scream, so I decide to take mercy on her and put her mind at ease to save myself the ruptured eardrum.
“Don’t worry, princess. Your virtue, or what’s left of it, is still intact.”
She scowls down at me, but when she speaks her voice is soft and filled with doubt. “We didn’t sleep together?”
“Oh, we slept together,” I say as I push myself up and place my bare feet on the floor. “Just not in the way you’re hoping.”
“Oh, get over yourself. Believe it or not, not every woman in the world wants to sleep with you.”
With sharp movements, she strides toward the stairs. I watch her go for a moment before remembering that I can match her pace now, and then I get up and go after her.
“You’re right. Not every woman in the world wants a piece of me. Although, they’d be crazy not to.” She glowers at me as we reach the top of the stairs, but her eyes betray her as they fall to my bare chest. She wants me just as much as I want her, and when she lifts her gaze back to mine, I wink at her.
Huffing, she picks up her pace.
“But you know what I’ve come to realize?” I ask. Taking two large steps, I reach her bedroom before she does and plant myself in the opening, blocking her entry.
Her expression twists and I can see the rage burning in her eyes. “What?” she snaps. “What is this big revelation?” Again, her gaze drops to my chest, then falls to my abs, then comes back up, sweeping over my arms, which I cross over my chest because it makes the muscles look bigger.
I love her attitude. It’s the right mix of pissed off and intrigued. She can’t resist me and she knows it, and that’s what’s got her all riled up. I can read the truth all over her. I decide to enlighten her.
“What I’ve come to realize is that it doesn’t matter how many women want me, just which woman wants me. And there’s only one woman whose opinion of me matters right now.”
I hold her narrowed gaze until dawning lights in them. For a split second, the little lines around her eyes vanish and I almost think she might smile, but she recovers herself quickly.
“Keywords: right now. I wasn’t born yesterday, Levi, so don’t presume me to be one of your nitwit groupies who can’t tell the difference between the truth and a crappy pickup line.”
With more strength than I would have guessed her to have, Vista places her hands on my chest and shoves. Knocking me off balance, I fall back a couple steps, just enough to give her room to pass.
“So you’re saying I need to work on my technique?”
Gripping the door, she’s practically seething as she stares up at me. “I’m saying you need to find yourself a different practice dummy.” Then she slams the door in my face.
A smile tugs at my lips. Vista has more guts than I realized. No woman has ever turned me down. Up until last night, I thought that was pretty damn awesome. I never understood why some men got off on chasing women around, dating, and buying them things to earn their attention. Now, I’m beginning to appreciate the thrill of the chase. Is that what Vista’s looking for, a guy who will chase her?
Leaning in, I push my face close to the door so I know she’ll hear me. “You know what I think, Vista?” Her silence only spurs me on. “I don’t think you want me to go away. I think you want me to chase you. Well, princess, you’ve got your wish, because you’re the only dummy I want to chase.”
Something slams against the door and bounces twice on the floor. A shoe? Throwing my head back I belt out a laugh. Damn, she’s a spitfire.
Game on.

J.C. Valentine is the USA Today and International bestselling author of the Night Calls and Wayward Fighters Series and the Forbidden Trilogy. Her vivid imagination and love of words and romance had her penning her own romance stories from an early age, which, despite being poorly edited and written longhand, she forced friends and family members to read. No, she isn't sorry.

J.C. earned her own happily ever after when she married her high school sweetheart. Living in the Northwest, they have three amazing children and far too many pets and spend much of their free time together enjoying movies or the outdoors. Among the many hats she wears, J.C. is an entrepreneur. Having graduated with honors, she holds a Bachelor's in English and when she isn't writing, you can find her editing for fellow authors. Sign up for J.C.'s newsletter and never miss a thing! http://bit.ly/1KxXWWB 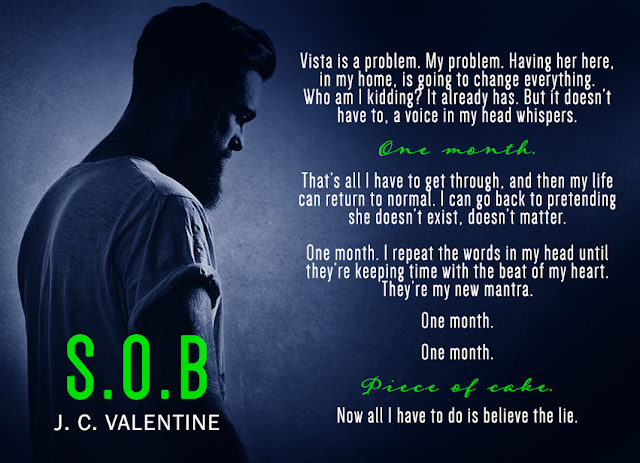