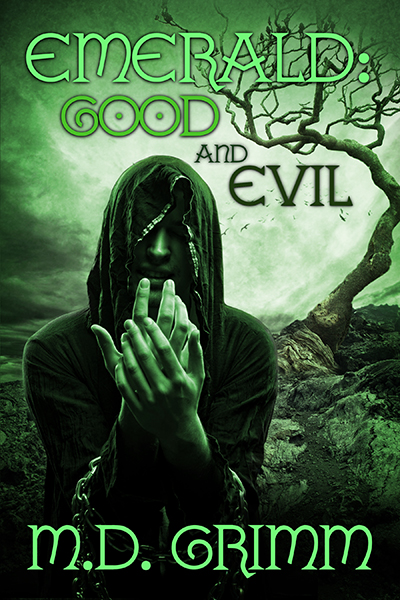 Those words often invoke a sense of love and comfort. But for the dark mage Morgorth, they mean hate and pain. As the seventh son of a seventh son, many believe Morgorth’s destiny is to become the Destroyer. His father embraced such a future and trained Morgorth through torture and fear to become his weapon. Morgorth managed to escape his father’s cruelty, but not the nightmares that still haunt him. For many years he’s lived with the stain of his father’s savagery, but now he must confront his nightmares head-on.

His father has found a stone of power.

Morgorth must return to his land of birth, to the memories he’s tried his entire life to suppress. Aishe is determined to help Morgorth defeat his inner demons, but he knows he might not be enough to save Morgorth from embracing his darkness. They know it will be a fight to the death and know Morgorth won’t be the same if he survives. With Aishe by his side, Morgorth hunts for his father, and finds answers to questions he never dared to ask—and must live with the truths they reveal.

Excerpt:
I glanced at Aishe to see he had his bow, an arrow nocked, and quiver at his side. He was crouched, still looking ill, but his eyes were hard and flat. I grinned in pride. Nothing could keep my mate down. I let the wind die and the ship slowed, rocking violently, the water lapping hard at its sides. The tentacles caught up and tried to wrap around the ship once again. I didn’t risk fire, but I had another element that was aplenty around me: water. Just as I gathered focus for the next spell, a tentacle tried to slither onto the deck, heading toward me. Before I could react Aishe shot an arrow, puncturing the slimy flesh of the tentacle. Then he ran and leapt over it, and with his sword, sliced off the tip. The tentacle shot back into the water, and the monster bellowed in pain. Aishe spun around, nocking another arrow. He was now close to me, and I could see it was a struggle for him to remain focused. He was sweating profusely and deathly pale. I would have ordered him below deck if I thought he would listen.

More tentacles were now slithering around the ship and the crew did what they could, cutting at the appendages and shooting their own arrows. They gave me the time I needed. I ran across the deck and realized the monster’s tentacles seemed to be following me. I wasn’t surprised, since most creatures could sense magick and many predators were attracted to it. If a predator ate a mage, they sometimes gained the power of their food: you are what you eat. I could use that to my advantage.

I reached the other side of the ship and flung my hand down with another word, using the magick in the water—every element had magick, instilled there by the Mother—and used it to freeze the water. But not just on the surface, I made the ice sink below where the beast rested. I continued the spell, causing the tentacles to freeze. It wasn’t easy to freeze saltwater but as I was using the magick within the element, and not my own to control it, it was much easier. Once the tentacles stopped moving, I instantly swung around and used the wind again to get the ship to move. We shot across the water once more, and I happened to look back to see what the beast was doing. We hadn’t gone very far before the ice broke. I realized the beast was far bigger, and stronger, than I’d suspected. I watched, fascinated and terrified, as the beast surged completely to the surface. Its bulbous head and gaping mouth appeared, its tentacles writhing in rage. Those black, pitiless eyes focused on us, and then the monster dove back into the water. It sped toward us, creating a hump in the water.

I took a deep breath, reaching a decision. It wasn’t going to stop, not until it had eaten me and destroyed the ship. I stopped the wind.

“Everyone hold onto something!” I bellowed. I glanced at Aishe as he clung to the rail, his eyes huge and locked on me.

I stood in the middle of the ship again and closed my eyes. My magick flashed hot inside me, and I used it to once again grab hold of the water’s magick. I clenched my fists and let the foreign magick fill me, feeling the pressure of it, the fluidness of the water, the refreshing and cool sensation. Then I opened my eyes and quickly grabbed a crystal from one of my pouches. It was small but it would serve for the task I gave it. I clasped the crystal between both hands and unleashed the spell with a focused word inside my mind. The spell latched onto the crystal and just as the beast reached us, intent on smashing the ship to pieces, the water suddenly shot upward, like a reverse waterfall.

A large column of water lifted the ship out of harm’s way and the tentacles of the beast slashed at the column as it roared in frustration. I made sure the ship reached a good height before locking the spell into the crystal. Spells only lasted if there was enough energy, or rather, magick, to sustain them. With crystals, I could hold the spell longer by pumping a predetermined amount of magick into them, turning the spell into an enchantment. I used such techniques for Geheimnis. I frequently had to recharge the crystals but it meant I didn’t have to consciously think about the spells anymore. They were very nearly freestanding. I used the same concept here but of a shorter extent. What I had planned wouldn’t take very long.

I ran to Aishe and pushed the crystal into his hands. “Hold onto this. It will keep you all airborne.”

“What are you doing?” Aishe made to grab me, but I had already leapt onto the rail, struggling to keep my balance.

I took a deep breath before I dove off the rail. I locked my hands over my head and made sure my magick was bubbling right below the surface. The beast rose out of the water and opened its mouth. This was going to hurt.

Meet the author:
M.D. Grimm has wanted to write stories since second grade and nothing has changed since then. Thankfully, she has indulgent parents who let her dream, but also made sure she understood she'd need a steady job to pay the bills. After graduating from the University of Oregon and majoring in English, she embarked on her writing career and couldn't be happier. Working by day, writing by night, she enjoys journeying on romantic quests and daring adventures and creating characters that always triumph against the villain, and find their soul mate in the process. 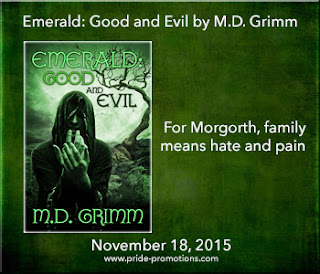