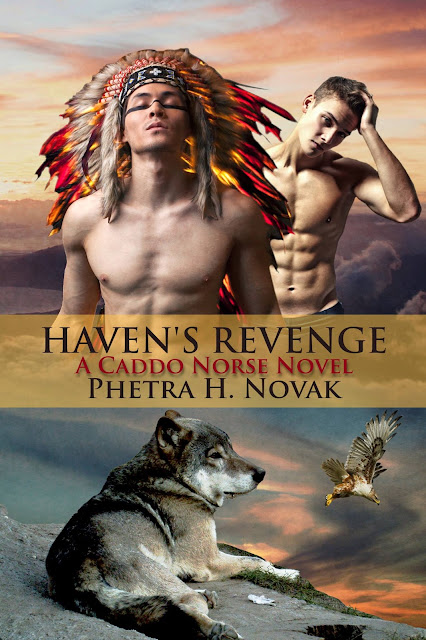 Haven Naranjo is a proud Caddo Indian, with a frightening past. He was a mere fifteen year old boy when he found his parents, part of his tribe, and his high school sweetheart slaughtered by a wereman gone mad. Falling victim to a system that is not always prepared to deal with a shattered young mind, Haven finally gives up on himself. He grows up to be bitter and hateful toward the creatures he hate. Werewolves.

Alexander Prescott is the younger of the two Prescott boys and comes from a large werewolf clan. But things are bigger than that. Alexander, is the true vessel of the Fenrir Ulv and is to become the leader of all supernatural beings, the King of Wolves. On top of that, he’s in love with Haven. He’s known since he hit puberty that Haven is his true mate. But there’s one problem, Haven hates what he can become. However, Alexander has a plan on how he is to charm his, and his wolf’s way into the grumpy Caddo Indian man’s heart.

But fate has other plans for them. The Asa Guard enters their calm country living, determined to use their own kind against them and kill the true vessel—Alexander Prescott.

When war between the Asa Gods and the Fenrir Ulv starts knocking on their door, what side will the damaged Haven choose? Will he find a way of trusting those, especially Alexander, who he feels has betrayed him and let his animal, the eagle, lead him straight to his fate by his mate’s side? Or will he trust the words of strangers, who come to make his quest of seeing all shifters dead a reality?

Haven’s Revenge is a story of an emotional journey for a whole community. It’s about finding acceptance not just from others but in yourself.

He stumbled toward camp, braiding his hair back with determination.

At first Alexander was taken aback, almost shocked by his abrupt, cold dismissal but it only lasted for a few short seconds before he got his bearings again. His new found confidence and possessive streak took over. Like the swift “animal” he actually was, he stood, crossing Haven's path in no time. When their eyes met, sparks flew. There was nothing submissive at all with the look that sparked in Alexander's eyes.

"No. You're mine, Haven. Mine. I’ve waited for you for years and I’m done. Get used to it because you belong to me now." His voice was calm but there was no misunderstanding the words that were spoken. He gripped Haven's jaw in one firm grip. With a great force, that shouldn't have been possible, he claimed Haven's lips with his own, forcing his tongue into his mouth as he gasped at the heated intrusion. Dominating Haven and the kiss completely Haven couldn't help but to give himself permission to melt into the hungry kiss. Just for a few seconds. When Alexander finally broke off the kiss, they were both breathing hard lips still only inches apart as they tried to stare each other out. Haven was the one who looked away first.

Alexander gave him a calm, almost arrogant smirk before turning his attention to getting himself dressed, rather than standing around with his jeans halfway down his thighs.

"In your dreams," Haven muttered, shaking his head. He was pissed at himself for letting his emotions get the better of him. See what losing control did? It fucked everything up, and what the hell was wrong with Alexander? That kid needed a new hobby, one that didn't involve him. But Haven feared that Alexander had made up his mind and wasn't letting go.

He was so screwed.

Haven turned to look at his boss. "Jesus. He’s been home, what, less than a day and already you all are on my case." Snorting loudly, he turned his head away, speaking more to himself than Coleman. "If he leaves me alone, I'll be happy to do the same."

He was surprised Coleman was so open with him about Alexander. It made him wonder what he’d told them and why. All he wanted was for everyone to leave him alone. The more they could pretend he didn't exist, the better.

They arrived at the broken fence and as they dismounted, tying their horses up in the shadow of some trees, Coleman suddenly spoke. "I want you to promise me, you won't hurt him, Haven." Coleman’s face was serious and his eyes were filled with sincere concern. "I love you like you're my own, but hurt him, and I'll kick your ass."

"Stop." Haven held a hand up; he didn't need to hear more. It didn't matter. It just confirmed what he already knew. He didn't deserve anything real and Alexander was as real as you could get. "I get it. Off limits. Suits me perfectly. Now maybe you should tell him that too." Haven pulled his hat down over his forehead to cover his eyes, marking the end of that conversation. Now if everyone could just fuck off and leave him alone, life would be great.

Phetra often refers to herself as the odd man out, the dorky book nerd who rather spend her time with a good book or making up fantastic stories with even more fantastic characters, than live in the real world dealing with real people.

The real world is strange in a very non humorous way and people in it complicate it to the point of wearing you out. In the world of the written word no matter if it is in someone else's words or that of her own things might get busy, complicated, and sometime even plain painful but somewhere along the line there is always a hero on the horizon. He might not be prime or proper, a church going pretty boy since the author prefer rebellious men and women who don't follow the protocols of society.

One of her favorite saying are that only dead fish follow the stream and well she ain't no dead fish.

Phetra live together with her family, two children, a domestic partner and their two cats in Gothenburg, Sweden and when reading her books you will notice that she always finds a way of bringing her on culture into her books.

The joy of writing and reading comes from her childhood and is something she has always loved, something she is passionate to share with others. Phetra loves hearing from her readers even with ideas of what they want to come next.

If you are looking for her the best place to start looking for her is at home in the quietest corner of the house where you'll find her either curled up with her Kindle or her laptop typing away.

Winner’s Prize: An e-copy of the book.