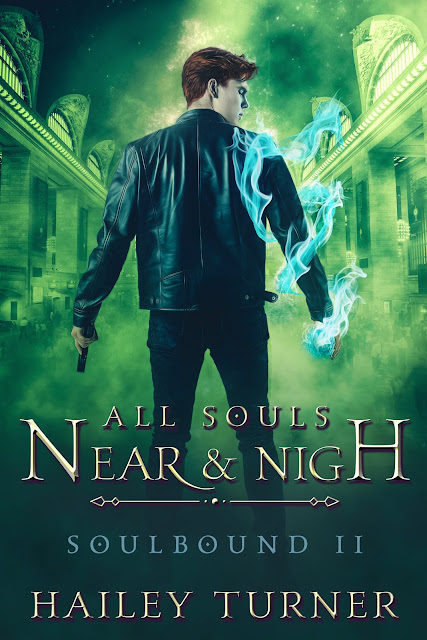 All Souls Near & Nigh by Hailey Turner

You can’t bargain with death if you’ve already sold your soul.

Special Agent Patrick Collins has been reassigned by the Supernatural Operations Agency to New York City. Learning to navigate his new relationship with Jonothon de Vere, the werewolf he’s now soulbound to, is nothing compared to dealing with territorial disputes between the vampires and werecreatures who call the five boroughs home. But the delicate treaties that have kept the preternatural world in check are fraying at the edges, and the fallout is spilling into the mundane world.

Manhattan’s club scene is overrun with the vampire drug known as shine and the subways have become a dumping ground for bodies. When the dead are revealed as missing werecreatures, Patrick and Jono find themselves entangled in pack politics twisted by vampire machinations.

Learning to trust each other comes with problems for both of them, and the gods with a stake in Patrick’s soul debt aren’t finished with him yet. Bound by promises they can’t break, Patrick and Jono must find a way to survive a threat that takes no prisoners and is stalking them relentlessly through the city streets.

Old and new betrayals are coming home to roost but the truth—buried in blood—is more poisonous than the lies being spun. Trying to outrun death is a nightmare—one Patrick may never wake up from.

All Souls Near & Nigh is a 104k word m/m urban fantasy with a gay romantic subplot and a HFN ending. It is a direct sequel to A Ferry of Bones & Gold, and reading the first book in the series would be helpful in enjoying this one. Please see the disclaimer in the Look Inside for content some readers may find triggering.

Author Hailey Turner says All Souls Nigh & Near is: An exciting sequel that builds on the series plot and will keep readers wanting more!

“Bloody hell, mate,” Jono swore, reaching for Patrick. “What happened?”
Patrick kicked the door shut behind him, which was fine with Jono because it gave him something sturdy to shove the other man up against. Gently, though, because Jono didn’t know what other injuries Patrick sported besides the ones on his face. Jono framed Patrick’s face with his hands, staring at the slightly swollen nose with a strip of medical tape arching over the freckled bridge and faded bruises around bloodshot, tired green eyes.
“I took a potion. I’m fine,” Patrick said, blinking at him.
Jono rolled his eyes before sliding his right hand down to Patrick’s throat, discreetly scent-marking him. The stench of travel, of too many bodies packed too closely together, clung to him. Beneath that was a hint of forest and blood, neither of which stopped Jono from worrying. Beneath all that was the familiar, bitter scent that was Patrick’s alone, and it felt like coming home to Jono.
“Fine doesn’t look like you took several punches to the face.”
Patrick’s mouth quirked at the corners. “Gonna kiss it better?”
“Cheeky. Could’ve just asked rather than go out looking for a fight.”
“Hazard of the job.”
“Bollocks.”
Jono shook his head before leaning down to gently press his mouth to Patrick’s. Those familiar plush lips immediately parted, letting Jono in. The quiet sigh he drank down told him more than words how tired Patrick must be. The mage wasn’t one to show weakness, even amongst friends, but Jono had started to learn the little quirks and half-hidden actions that spoke of Patrick’s true feelings.
Patrick was still a hard read on the best of days, soulbond or not, but Jono was figuring him out.
Q&A with Hailey Turner:

What comes first, the plot or characters?
This is like the chicken or the egg question. For me, it’s a mixture of both. I feel my characters play off the plot, but I need the outline of the book and series to really create a character and their motives. Characters and plot are pretty intertwined when I create a book, so I can’t say one comes first above the other.

Describe a typical writing day.
I usually write in the morning and evenings around work on weekdays, and for a block of hours on the weekend around errands and time spent with friends and family. On weekdays, I get up early in the morning (I’m talking 5:00am here) to get some writing in before work. I try to make time to write every day otherwise it would be difficult to finish a book if I didn’t.

How do you come up with the titles to your books?
I like to have themes with my titles and they tend to have the same sort of word structure for the entire series. For my Metahuman Files series, the titles spoke to the missions in each book. For Soulbound, every title has a hint of the mythology I’ve incorporated into that particular book. It varies with every series but I honestly can’t start a book without a title.

Newsletter:  You can keep up with Hailey's future projects by joining her newsletter, where you can instantly download two free Metahuman Files short stories and the Soulbound short story Down A Twisted Path:  http://eepurl.com/cAEejL

Giveaway: Win 1 of 2 e-copies of any back catalog book by Hailey Turner! 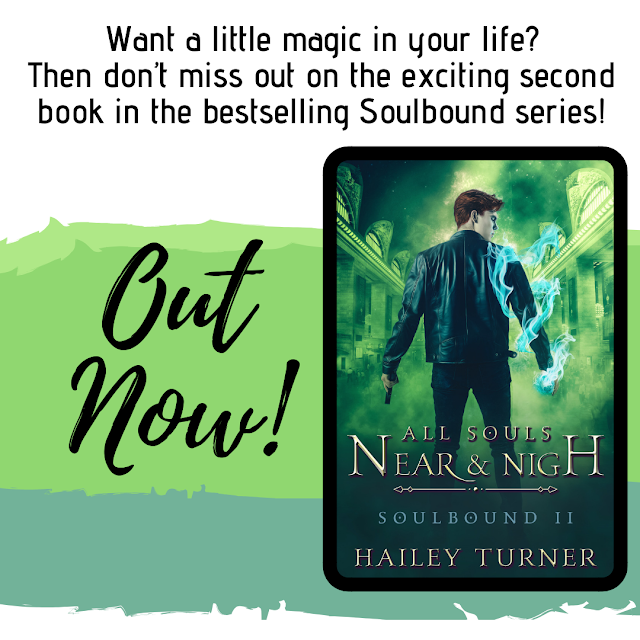