Black by Quin & Perin - Blog Tour with Excerpt and Giveaway

The sound that made my knees buckle.

With those cat ears, in his hair.

And the tail, that he flicked.

A ray of sun in the drizzling rain. I’d been a traveler, floating adrift, while he’d stayed in one place. How was I supposed to know he’d become my anchor? My light. My everything. But would I ever become his?

A shove and he fell into a seated position. His hands were all over me. Squeezing at my thighs, shoving my shirt up. Stepping back, away from him, I grabbed the bottom of my shirt and pulled it over my head. I draped it over the coffee table and worked on my pants next. Kitties didn’t wear clothes after all. If I was going to be a kitty, I was going to be a good one.

Naked, body free in the cool air of my apartment, I lifted my arms above my head and stretched out. Flaunting. I wanted him to touch my cock. Heated, it swayed with each of my movements, begging for attention. That was for later though. Now we played.

Dropping to my knees, I turned my face towards him and angled my head to the side. Hands hit the floor, and I crawled towards him. Strutted as best as I could. It was like the evening before when I’d tried to seduce him. Except I’d already succeeded in my goal this time. Now it was all icing on top.

I crawled up to him, hands going to his knees. “Dima,” he murmured, reaching for my hair. He laced his fingers through, but I jerked my head away from him.

With a hiss, I narrowed my eyes and bit down on his fingers. It made him laugh, but he didn’t touch me again. If he wanted me to get into character, we were going to have to do it properly. I wanted to be something different, and he was going to have to deal with that.

Tony spread his thighs to accept me between them. I scratched and then dipped my head. With the skill of my tongue and teeth, working in tandem, I popped open the button of his jeans. The zipper was much easier, and then he helped me. While he worked on getting his pants out of the way, I showed off my body. Elbows rested on the floor behind me, back arched sharply as I waited. The skin stretched tight over my ribs, stomach a little dip. I was tiny, and I knew it, but Tony definitely seemed to like it.

I purred at the compliment, and when the couch stopped its faint squeaking from his movements, I was at my place between his thighs again. He’d not moved from his spot, making it easier on me. Without much ado, I dove face first into his lower stomach, brushing my nose into his tuft of pubic hair. He smelled faintly of soap and musk, sweat. A distinctly manly smell that drove me crazy. His cock flexed, the heat of it against my cheek. Too heavy to stand on its own when he was seated like that, it pointed towards his hip.

I nipped at his stomach and turned my head so my cheek rested against him. Keeping my eyes closed, I flicked my tongue against the side of his cock. He groaned and shifted, legs spreading wider.

He thought he was going to get what he wanted. One thing he would learn was kitties didn’t much care to do what other people wanted.

This time when I scratched at his thighs, I was attacking bare skin. He jerked against me, hissing between his teeth.

He might have caught the smirk that danced over my lips, but if he did, it was only a brief moment as I bypassed his cock and went straight to his balls. My tongue lapped across the tender flesh, tasting salt and heat. I swore I felt his heart beating as my nose brushed the base of his cock and my tongue worked him over. Curious, I mouthed at his sack before letting out a tiny “meow.” He arched so hard and quickly, I thought he was gonna jump off the couch.

If he liked that, Tony was in for a long night. 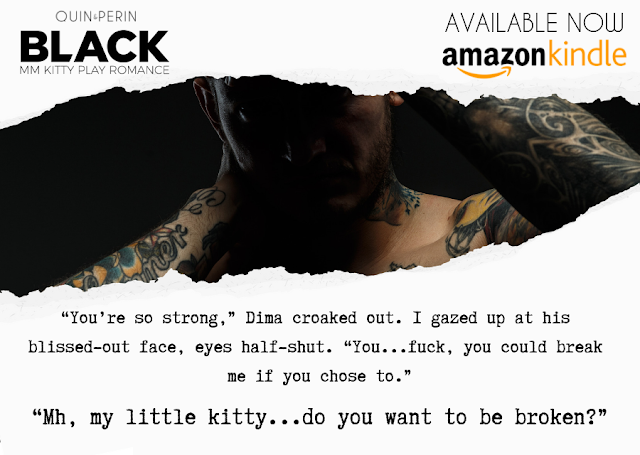 This is Quin&Perin. We are a team of Sultry Gay Romance writers who focus on detailed, toe-curling, and realistic smut scenes with a fair share of dirty talking (Oh, boy). We cannot wait to share our boys with you. Thank you for stopping by! That said, it is time for the next level of smut: stories featuring fire, lust & desire.

Enter the Rafflecopter giveaway for a chance to win an ebook of Black and a $5 Amazon Gift Card.