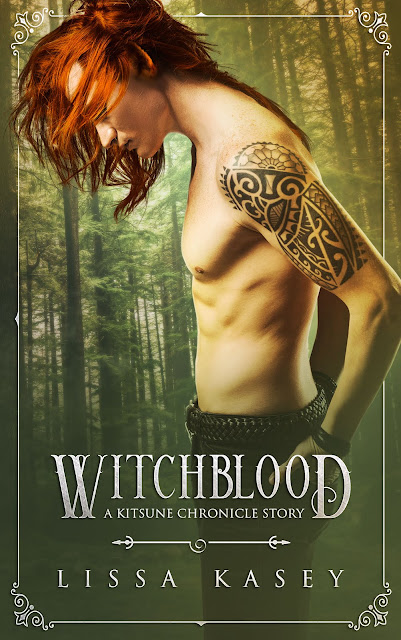 Sebastian Volkov, a fox shifter raised among werewolves, ran from everything he ever loved after a brutal attack that left him fearing his own shadow. That night a single kiss saved his life and left him with fantasies of a man whose face he couldn’t remember. When Sebastian’s car breaks down in a small Washington town, he meets an Alpha werewolf who reminds him vaguely of a stranger’s kiss.

A year ago Liam Ulrich, Alpha of the Northern Cascade’s Pack, shared a magic filled kiss with a virtual stranger, the infamous Witchblood child of the most powerful werewolf in the world. Since that night, Liam has been waiting for Sebastian to find his way home. Liam knows that Sebastian doesn’t trust easily, or at all, so he’s going to have to give his prickly mate time and space.

The past Sebastian tried to escape still stalks him and slowing down gives it time to catch up.

When the werewolves’ ultimate enemy rises up to cast its shadow over them all, Sebastian realizes he will have to stop running or risk losing everything…. including his hope of a future with Liam. 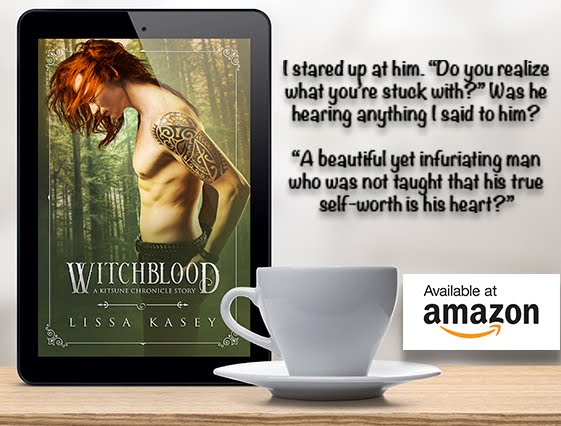 5 out of 5 stars
Lissa Kasey is back with a brand new book in a brand new urban fantasy/paranormal series... And what a wild, extremely addicting and satisfying ride this book was from start to finish! Witchblood is the first book in the Kitsune Chronicles. If you've never read this author's books before you're in for a treat. If you were already a fan, be prepared for a book that you won't want to put down. I got so sucked into this book while on lunch at work one day, I was late clocking back in.

While I won't delve too deep into the plot because I don't want to spoil it for anyone. So, Witchblood features a kitsune raised as part of a werewolf pack.  Now of course Kitsunes are not normal shifters, so Sebastian hasn't had the easiest time of it. Too many in the Volkov pack fear him and/or hate him but also want to  use him for his omega calming powers. All of this shapes Sebastian into who he is, and leaves him with scars and issues to overcome.

The story is told completely in Sebastian's voice, which worked rather well for this story and these characters. The pace of the story was tight and kept me engaged from start to finish. This could easily be a one sitting read for so many readers but I caution reading it too fast as you might miss some of the subtle things that happen in the book. There are many elements to the story from Sebastian being in a werewolf pack,  working in the bakery, and even digging and planting his herbs for his alchemy projects.

I'm completely hooked on this series and honestly can't wait to see what the author has in store for her characters next. I highly recommend picking up this book and indulging in a fantastic urban fantasy read.

Reading angst-filled stories can be heartbreaking because we, as humans, connect to pain in a very emotional way. Often on social media, you’ll see someone who posts about how a book made them cry, or even something as small as a meme. Some wonder why anyone reads the stuff if it effects them emotionally that way. Masochism? Probably not. More likely we identify with a character, their story, or even a situation, and it gives us just a tiny bit of hope for ourselves. Books are an escape from our real world problems. As a voracious reader I grew up spending my days lost in made up worlds, learning about people who had never really existed and wishing I were there. Not much has changed now that I’m an adult and a writer as well as a reader.

I wrote my first novel in the sixth grade. It was called Ship Wrecked and featured a group of teenagers who had been ship wrecked on an island which was full of booby traps. At the time I’d been reading a lot of Christopher Pike books, so the story had a pretty grim outcome. In fact everything I wrote for the first twenty years of my life erred on the side of total destruction to my characters. Lots of rejection later, I learned that destroying a character might be fun, but it was the rebuilding that made for enjoyable reading. How often have you read a series in which the author killed off a favorite character and you angrily said you’d never read them again, only to buy the next book anyway?

Growing up in a less than ideal family I had a lot of hardship that I poured into my writing to ease some of the daily sadness. I read a lot of romance, but didn’t starting writing it until I was in my late twenties. Romance was candy. It was easy for my brain to attach happiness to it because it didn’t mirror anything I’d ever experienced in real life. Until that point I’d been writing urban fantasy, and thought, well let’s see if I can add a bit of this candy to all my angst. Which was how Inheritance was born. If you haven’t read it, the Dominion series was my first urban fantasy romance series. It was also my first published books. I learned a lot from the dynamic of damaged characters. All the expectations of life and fear of failure I dropped into Seiran and let him run with it. Poor guy. He’s come out okay. And to those who’ve asked, yes there will eventually be a book five.

My latest urban fantasy romance, Witchblood, has some similarities. Sebastian has been running from his past and himself for a long time. He’s got so much self-doubt that he expects everyone to stab him in the back, even people he’s never met before. His personal growth is not so much about trusting again, that will take time. Often a lifetime. It’s more about having hope to try. None of his problems are solved overnight. When Liam tells him they are fated mates, Sebastian is wary and ready to run again.

I recently did a poll in my author group. What would people do if they found out they had a fated mate? The major of them answered: Research the hell out of them. Our suspicious world demands knowledge. But if they didn’t have hope that it was real, would they look at all? I think that’s why angst is such a beloved genre in the romance niche. Everyone loves the brain candy every once in a while with the simple boy meets boy and they fall madly in love, happily ever after. But we know that’s not how life works most of the time. And hope for a character who’s a little damaged like us to find love, is a pretty big motivator.

One of my favorite lines from the book is one of those that just free-flowed from my life. Sebastian had just found out that Liam has a grown daughter. So Sebastian assumes that Liam is the typical alpha, married with kids. His thoughts are: I sighed, fantasy bubble bursting into shards of emotional glass. Reality is that Sebastian has made a wrong assumption and caused himself pain. Sebastian is an untrusting bastard who runs into a wall that is his fated mate. How he reacts is based on his upbringing and personal choice. He could run again. Or he could take a chance. We as readers enjoy the angst taking that chance brings the story. Even if it cuts us along the way.

Lissa Kasey is more than just romance. She specializes in in-depth characters, detailed world building, and twisting plots to keep you clinging to the page. All stories have a side of romance, emotionally messed up protagonists and feature LGBTQA spectrum characters facing real world problems no matter how fictional the story. 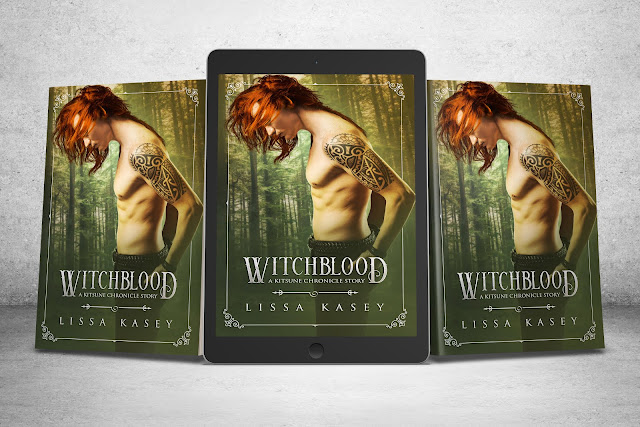