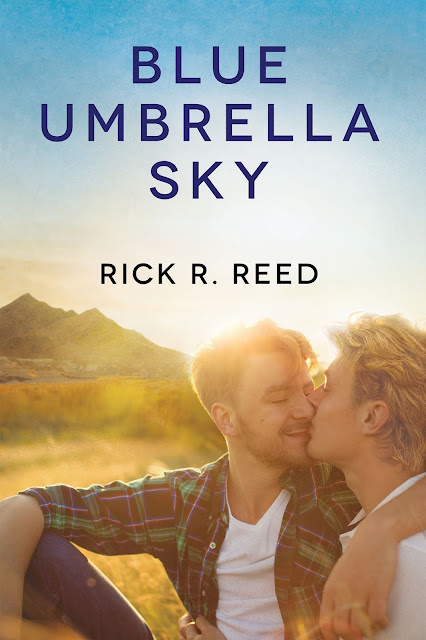 When a summer storm and flash flood jeopardize Milt’s home, Billy comes to the rescue, hoping the two men might get better acquainted… and maybe begin a new romance.

Can they lay down their baggage and find out how redemptive love can be?

Blue Umbrella Sky is my first novel set in my new home of Palm Springs, California. The old song is true—it never rains in southern California, but when it does, it pours. A flash flood plays an unlikely Cupid in bringing our two main characters together, as you’ll see in the excerpt below.

Worst of all, Milt watched the water hover just outside the sliding glass doors, waiting, perhaps, for an invitation to come inside.

Ah, the hell with it, the water seemed to say, why wait for an invitation? This party needs crashing!

And it began to seep in…. A little at first, and then faster and faster, until his entire floor was covered.

Milt involuntarily cried out, voice high-pitched and terrified, nothing like the butch forty-two-year-old he thought himself. “Help! Flood! Somebody, please!” The cry was pure panic. Logically, he knew no one would hear.

What that helper would do, Milt had no idea, but he simply wanted someone to be with him in his predicament. The thought flitted across his consciousness that he’d been here six months, and it wasn’t until today and the advent of a rainstorm of biblical proportions that he realized he didn’t want to be alone. He swore as warm water covered his bare feet at the exact moment his power went out, plunging his little sanctuary into murky dark.

And at this very unnerving moment, Milt realized—gratefully—someone just might have heard his pleas for help. There was a pounding at the back door, rattling the glass jalousie panes. He turned, confused for a moment—he’d cast himself as a sole survivor, a man against nature, alone.

The pounding continued. A voice. “Hey! You okay in there?”

Milt crossed the living room and the small galley kitchen to get to the back door. But when he opened it, there was no one there. The wind pushed at him, mocking, and the rain sent a drenching spray against him. Despite getting soaked, Milt leaned out, gripping the door’s frame with both hands for balance, and looked around.

Even though the covering of storm clouds had made it seem as though a dusky twilight had fallen, he could see that there was no one there.

He wondered if he’d imagined the knocking and the voice. He really didn’t know his neighbors, having kept to himself since he’d moved out here because he just wasn’t ready to connect with others again. He’d given so much to his Corky during those final tortured months…. Sometimes Milt felt he had nothing left to give anyone again ever.

And a dog, cowering and bashful as she might be, had been company enough.

His little reverie was shattered by a second round of knocking, this time at the sliding glass doors in his living room. “Okay, so I’m not hearing things.” Milt turned away from the back door and headed to the sliders.

Outside, a young man stood, drenched from head to toe, in a pair of neon-pink board shorts and, well, nothing else. Maybe there’s flip-flops. Milt couldn’t see the guy’s feet. His jaw dropped as he hurried to open the door. In spite of all that was going on—the storm, the flood, the risk of his home being destroyed—he couldn’t help his thoughts, notions he’d decided long ago died within him.

I am looking at an angel; that’s all there is to it. He’s going to sweep me away in those muscular arms, lifting me right up to heaven and setting me down gently next to my Corky.
Milt shook his head. A short burst of laughter escaped him, almost as if someone else were chuckling in his living room with him.

The guy was handsome, a tanned and buff dreamboat. Corky would have loved him, saying, once upon a time, that looks like this boy’s should be illegal, or at least sinful. Milt smiled.

Even though his hair was plastered to his head, Milt could tell it was thick and luxurious—right now the color of dark wheat, but Milt was certain that in dryer moments, it was as gold as the pure, unfiltered sunshine Milt had grown accustomed to being greeted by every morning. He had a body that made Milt, if only for a moment, forget the storm and the fact that he was a widower, still grieving nearly a year after losing his man. Muscles, smooth bronze skin, and a six-pack had the power of oblivion, of taking precedence over everything else.

Stop, he mentally chastised himself. He flung open the slider, noticing the rain had—at last—slowed to a patter and the winds had died down almost completely. Milt, though, couldn’t seem to put lips and tongue together to form a greeting or ask a question or to even say anything at all. His eyebrows came together like two caterpillars possessed of their own will.

“Hey there, man. I heard you calling out for help.” He jerked a thumb over his shoulder. “I live in the unit behind you.” He smiled, revealing electric-white teeth that made Milt’s thoughts go even more blank or even more lascivious, he wasn’t sure which. He shivered.

Rick R. Reed draws inspiration from the lives of gay men to craft stories that quicken the heartbeat, engage emotions, and keep the pages turning. Although he dabbles in horror, dark suspense, and comedy, his attention always returns to the power of love. He’s the award-winning and bestselling author of more than fifty works of published fiction and is forever at work on yet another book. Lambda Literary has called him: “A writer that doesn’t disappoint…” You can find him at www.rickrreed.com or www.rickrreedreality.blogspot.com. Rick lives in Palm Springs, CA with his beloved husband and their fierce Chihuahua/Shiba Inu mix.