Time is running out.


After saving the world twice, Xander, Jameson and friends plunge headlong into a new crisis. The ithani--the aliens who broke the world--have reawakened from their hundred millennia-long slumber. When Xander and Jameson disappear in a flash, an already fractured world is thrown into chaos.


The ithani plans, laid a hundred thousand years before, are finally coming to pass, and they threaten all life on Erro. Venin and Alix go on a desperate search for their missing and find more than they bargained for. And Quince, Robin and Jessa discover a secret as old as the skythane themselves.


Will alien technology, unexpected help from the distant past, destiny and some good old-fashioned firepower be enough to defeat an enemy with the power to split a world? The final battle of the epic science fiction adventure that began in Skythane will decide the fate of lander and skythane alike. And in the north, the ithani rise…


Venin stood under the dome of the chapel, the waters of the Orn rushing past the small island to crash over the edge of the crater rim, where they fell a thousand meters to the broken city of Errian below.

The Erriani chapel was different from what he was used to back home. The Gaelani chapel in Gaelan had sat at the top of a tall pillar of stone, open to the night sky, a wide space of grass and trees that intertwined in a natural dome through which moonlight filtered down to make dappled shadows on the ground.

This chapel, instead, was a wonder of streaming sunlight, the columns a polished eggshell marble with glimmering seams of gold. Red creeper vines climbed up the columns, festooned with clusters of yellow flowers that gave off a sweet scent.

Both were bright and airy, but the Erriani chapel lay under a dome supported by fluted marble columns, a painted arch of daytime sky and the rose-colored sun blazing overhead.

The last time he’d gone to chapel had been with Tazim, before his untimely death.

Long before the troubles that roiled the world now.

Something drew him back. A need to reconnect with his past. To bridge the gap between then and now, between who he was and who he had become. Taz would have liked this place.

The chapel here had survived the attack, while much of Errian had not. The city below was a jumble of broken corrinder, the multistory plants that were the main building stock for the city. They would grow again, but the sight of the city’s beautiful white towers laid low struck him to the core.

So had Gaelan looked, after the flood.

Venin turned back to the chapel and unlaced his boots, baring his muscular calves before he approached the fountain that splashed at its center. The cool flagstone beneath his feet sent a shiver up his spine, and green moss filled the gaps between the stones.

Some builder whose name was lost to time had tapped into the river itself to make the fountain run, and the water leapt into the air with a manic energy around the golden statue of Erro, before falling back down to the pool.

Venin knelt at the fountain’s edge on one of the well-worn pads, laid his hands in the shallow water, and let his wings rest over himself, making a private place to pray.

Erro and Gael, spare us from danger and lift us up into the sky with your powerful wings. He gave Erro deference, being that this was his chapel, but he hoped Gael would hear him too. The god of his own people had been known to intervene in mortal affairs before, and if what Quince had told them about these ithaniwas true, they would need all the help they could get.

He looked up in astonishment to see the statue of Erro giving off an intense golden glow. His mouth dropped open, and he stood and stared at its beautiful male curves and muscles. Maybe the gods were answering him.

Venin reached up and touched the statue’s outstretched hand. The shock knocked him backward onto his ass, and he hit the ground hard, slamming into one of the marble columns.

Venin groaned, stunned, and reached back to feel his wings and spine. He seemed to be in one piece.

Taz would have laughed his ass off at the whole thing.

After a moment he sat up cautiously. He wrapped his arms around his legs and stared up at the statue, his chin on his knees.

The glow was gone.

Did I imagine it? He stood and felt the back of his head. A lump was already forming there. That’s gonna leave a mark.

Something had changed. Venin didn’t know what yet, but he was sure of that much.

He pulled his boots back on and laced them up. With one last suspicious glare at the statue, he turned and stepped out of the chapel, taking a deep breath of the moisture-laden air.

Then he leapt into the sky to soar down to the broken city. 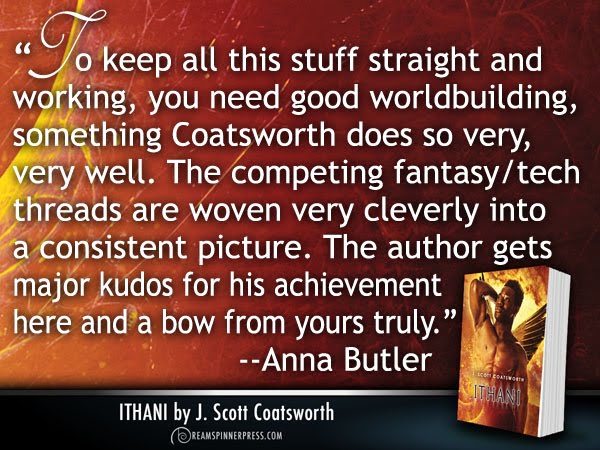 Ithani is the third and final book in The Oberon Cycle. This is definitely not a stand alone book and the series must be read in order from the first to final book. Each book leads into the next and missing one or reading out of order will definitely confuse the readers because there is a lot of story in each book in the Cycle.

Anyone who's read my previous reviews knows that I'm a really big fan of this author. His world building is exceptional, and that's something that can be really hard to find in the LGBTQ genres. That's not saying other authors aren't doing it, it's more so that this author does it the old school science fiction master way of writing. This final book in the series does not disappoint in continuing the world building and bringing it to the ultimate conclusion adding in enough new to keep it fresh and interesting till the final page.

I will admit that at first I struggled a bit with the pronouns in the ithani culture. More I think because there were still instances of she/he sprinkled through the text and I wasn't expecting to see those with the z based pronouns. That really didn't detract from the flow of the story or the story itself. It was just one of those little things to note that other readers may want to take those extra few minutes to really read through the guide at the start of the book, and even take the time to read it again. Ithani itself is a very good, very strong conclusion to an absolutely stellar series by this author. I'm actually sad to see this series come to its conclusion because it just worked so well for me.

I don't want to really delve into the plot as this is a book you need to read from your perspective vs mine as a reviewer. I come into this series already loving the author's style of writing, and having been a huge science fiction/fantasy reader and that add a different aspect to what/why I enjoyed what I did in the book. I know I've kept this review relatively vague but hopefully you see something that sparks your interest in order to pick up this final book if not the entire series if its one you haven't read yet.

Every writer has inspirations—authors, films, books, friends and family that help shape their work.
I am no different.
For Ithani, I had one specific inspiration—the Giants series by James P. Hogan. Hogan was a product of his time. His heroes (the ones who aren’t aliens, anyhow) are overwhelmingly straight, white and male.
But his plotting was light years ahead of most of the other writers of his time.
Book One, “Inherit the Stars,” opens with the news that someone has discovered the body of an astronaut on the moon. The catch? The man’s body is 50,000 years old.
And then we’re off and running on a multi book adventure that keeps peeling back the plot like layers of an onion.
I won’t spoil the reveals for you—suffice it to say they are legion. And just when you think you’ve figured it all out, you find out there’s another hidden secret to discover.
This, then, was the driving force behind the “Oberon Cycle” – and Ithani peels away the final layers. For now.
There are secrets and Easter eggs and connections that you) hopefully never saw coming. But in the end it will all make a crazy sort of sense.


So grab a copy and dive in. And drop me a line to let me know what you think when it’s all over. J


You can find him at Dreamspinner here, Goodreads here, on Amazon here, on QueeRomance Ink here, and on Facebook here.