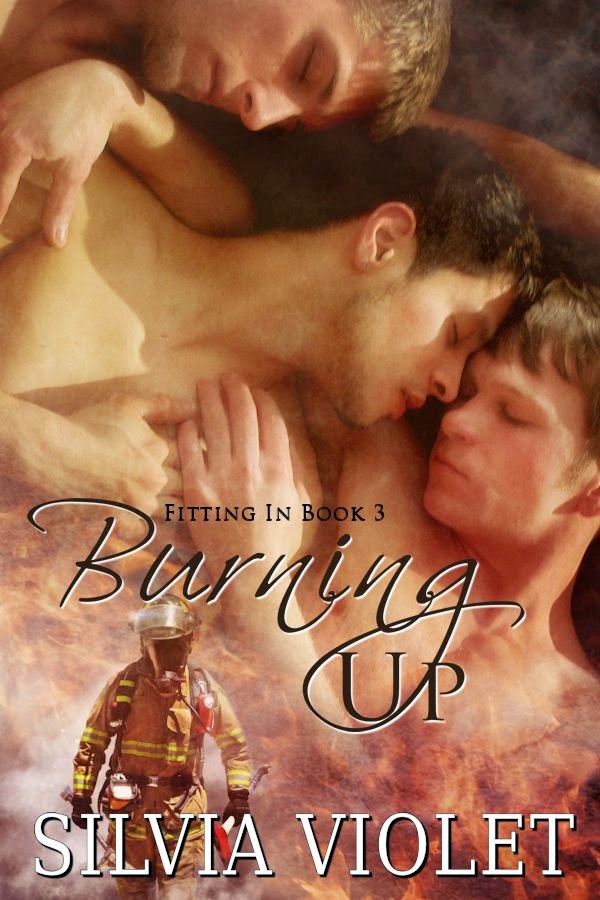 Book Name: Burning Up
Series? Yes. Book 3 of the ‘Fitting In’ Series. ‘Burning Up’ can be read as a standalone, but does reference characters from previous books.
Release Date: February 18, 2015
Goodreads Link: http://goodreads.com/book/show/24561157-burning-up

Bryce has been a firefighter for ten years, but when a horrific house fire leaves him reeling, he moves to a new city, hoping to shove those memories behind him. As he adjusts to his new station, Bryce keeps to himself until Matt and Toby, two hot young men in his unit, throw temptation in his path. Bryce knows better than to mess around with men he works with, especially two newbies who are in the closet. But after a difficult day, Matt and Toby offer him compassion and friendship, which slips so easily into sex Bryce finds the combination irresistible.

Matt and Toby want to expand their relationship to include a third, and they've set their sights on their sexy bear of a lieutenant. Their first night together is a scorcher, and, more than that, it feels right, to all of them. But since Bryce refuses to hide who he is, and dating men on his shift is against the rules, all three men are going to have to make some tough choices if they want to stay together.

Excerpt:
“They’re watching you again,” Mason spoke in a low voice as he whizzed past Bryce, carrying drinks to the opposite end of the bar.

“You’re imagining things again.” Ever since Mason swore that Toby and Matt, who’d become regulars at the bar after Bryce started working there, were gay and interested in Bryce, he’d been teasing Bryce about their interest.

Bryce told himself not to look, but he couldn’t help glancing toward the corner booth where they always preferred to sit before going back to wiping down the bar. Did they sit there because it gave them a good view of the bar? Bryce scowled. No way in hell were his hands shaking. No way in hell was he letting himself get his hopes up. Even if they were gay, even if they were interested in him, starting something with two guys from work would be the pinnacle of idiocy. Hell, getting involved with more than one guy was insane from the start. Just because Mason and his boyfriends had made a threesome work didn’t make it realistic for Bryce. There was an exception to every rule.

“You’re wrong,” Bryce said as he passed Mason on his way to take a customer’s order.
Mason snorted in reply.

Bryce was glad to see the bar was filling up. He did not need to spend the next hour telling himself not to look at Toby and Matt. He did plenty of that at the firehouse. Toby’s smile could heat up and entire room and Bryce never wanted to look away from it, unless it was to contemplate running his hands through Matt’s wavy brown hair while staring into his dark eyes.

But if Mason was right and they were gay, maybe they really were lovers. If so, he had no business approaching them, whether they were watching him or not. Just because they liked to look didn’t mean they wanted to play. They didn’t need him fucking up whatever they had going.

Plus, they worked together. They were a team, with people's lives on the line.

The line at the bar grew long, and Bryce got busy taking orders, making drinks, and ringing people up at the register. When things finally slowed down, he needed a bathroom break. As he headed to the back, he noticed Matt and Toby playing pool with a couple of guys he recognized as regulars. Toby waved and he waved back, hating the way his pulse accelerated. What the hell was wrong with him?

He pushed open the door of the restroom but failed to check his instinct to glance back over his shoulder. Toby’s eyes were glued to his ass. There was no doubt about it this time. He whirled back around before their gazes had a chance to meet.

So Toby wasn’t straight. Bryce had to admit that now. He was gay or at least bi, but he was just appreciating the scenery. That didn’t mean anything. Bryce appreciated guys’ asses all the time.
When Bryce left the bathroom, Toby and Matt were leaning in close, talking, arguing actually based on the angry expressions on their faces. Bryce hurried back to work, glad he didn’t have to decide whether to speak to them or not. Several minutes later, Toby appeared at the bar. Mason, the little bastard, wasn’t busy, but he made no move to take Toby’s order.

“What can I get you?” Bryce asked.

“Just cashing out our tab.” Our? Maybe Toby was just buying that night.

“Sure.” Bryce looked Toby’s name up in the register, ran his card, and handed him the receipt to sign.

“Thanks,” Toby said, flashing a smile that made his eyes twinkle. How was it that he made that single word sound flirtatious? Bryce was supposed to be the one who flirted, the one in control of a situation, but despite Toby being so much younger, Bryce ended up flustered every time they spoke.

Silvia Violet writes erotic romance in a variety of genres including paranormal, contemporary, sci fi, and historical. She can be found haunting coffee shops looking for the darkest, strongest cup of coffee she can find. Once equipped with the needed fuel, she can happily sit for hours pounding away at her laptop. Silvia typically leaves home disguised as a suburban stay-at-home-mom, and other coffee shop patrons tend to ask her hilarious questions like "Do you write children's books?" She loves watching the looks on their faces when they learn what she's actually up to. When not writing, Silvia enjoys baking sinfully delicious treats, exploring new styles of cooking, and reading to her incorrigible offspring.

Please share how you start researching and writing a new book. Do you have any must haves when you write? (i.e. certain type of pen, drink/snack, quiet or music, etc) Do you set goals for word count or page count, etc.

I always start with my characters. Once I have the two (or three in the case of the Fitting In series) main characters formed my mind, I write a scene or two to get into their voices, not necessarily the first scene or anything consecutive. Sometimes I do a bit of research on their professions or the location or something else I know I’ll need first. But often I start writing and just leave notes in the manuscript for topics I need to research, sometimes a small line, sometimes as in the case of the firefighting scenes in Burning Up, a whole scene.

I don’t have any absolutes that are always with me when I write, in part because I write wherever and whenever I get the chance, but most of the time I have coffee and I love writing amidst the buzz of conversation at a coffee shop.

I always set word count goals when I’m doing first draft. I guess how long the book will be, think about how long I have to finish it, and set weekly goals, typically 10-15k. I also break those down into daily word count goals, which vary depending on my other responsibilities. 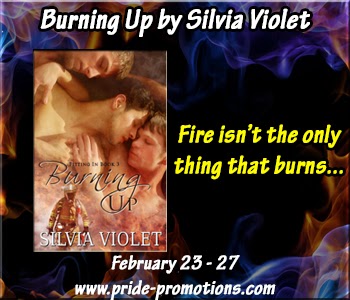