The Truth As He Knows It by A.M. Arthur - Blog Tour with Author Q&A and Giveaway 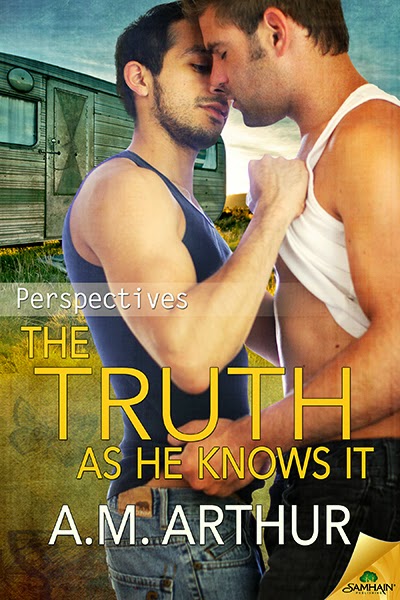 Officer Noel Carlson isn’t out to anyone in small-town Stratton, Pennsylvania, only to distant friends and family, so a relationship is out of the question. That doesn’t stop him from wanting one, though.

When a night-shift call brings him face to thonged butt with a hired stripper whose girl-party gig went terribly wrong, Noel takes pity on the guy and lets him go. But he can’t get the encounter out of his mind.

Shane has big-time debts to repay, especially to the brother who sacrificed nearly everything for him. His two jobs, in a deli and as a stripper, leave him no time for a social life. But a non-date of hot sex and takeout food with Noel? He can squeeze that in.

The bond they form is stronger than either expected or wanted. Especially since the step Shane’s about to take to put his brother—and his soul—back in the black isn’t quite legal. And he never calculated just how much his determination to make things right will cost him in the end.

Excerpt:
“I want to see you again,” Shane said.
Noel grinned, flashing those dimples. “I’d like that too. My work schedule is pretty weird, though. I’m first shift, which is eleven at night to seven in the morning, five days, starting tomorrow.”
Shane worked that one around. It gave them daytime hours, and evenings on Wednesday and Thursday. He worked at the deli tomorrow, and Saturday was off the table. Probably Sunday too, for good measure. “When do you sleep?”
“Usually when I first get home, from about eight to two or three. Sometimes longer, depending on the night.”
“So you’re usually free dinnertime until like ten?”
“Pretty much.” Noel cracked an unexpected yawn. “Sorry, my schedule is a little off after spending the day with Tristan. I try to keep similar sleep times on my days off so I don’t get too screwed up.”
Shane stood, surprised. “How long have you been awake?”
“About thirty hours.”
“Shit, why didn’t you tell me that?”
“Because I wanted to do this tonight. I’ve been thinking about you all week, and I’m glad I saw you at Mineo’s today. Really glad.”
“Me too.” Shane draped his arms around Noel’s waist. “And since this has been a fantastic night, I’m going to go before you pass out from exhaustion.”
“Do you want to get together tomorrow?”
He considered it for about two seconds. “My weekend’s pretty booked with work and stuff. Monday? We could maybe go out for real this time?”
“Sounds good. I’ll call you when I get up Monday and we can hammer out the details.”
“Okay.”
Shane collected his clothes and dressed, taking his time because Noel was watching. The opposite of a striptease, and Shane kind of loved the novelty of it. He meant his good-night kiss to be soft, quick, but Noel held him tight and devoured his mouth until Shane was breathless and half-hard. God, he could kiss Noel for hours and not get tired of it. But he saw the fatigue in Noel’s eyes, and it was time to leave.
“See you soon,” Shane said. “And thanks for dinner.”
“You’re welcome, cowboy.”
Shane strolled back to his car with a bounce in his step, positive he’d never be able to hear the word “cowboy” again without thinking of Noel Carlson.

A.M. Arthur was born and raised in the same kind of small town that she likes to write about, a stone's throw from both beach resorts and generational farmland.  She's been creating stories in her head since she was a child and scribbling them down nearly as long, in a losing battle to make the fictional voices stop.  She credits an early fascination with male friendships (bromance hadn't been coined yet back then) with her later discovery of and subsequent love affair with m/m romance stories.
When not exorcising the voices in her head, she toils away in a retail job that tests her patience and gives her lots of story fodder.  She can also be found in her kitchen, pretending she's an amateur chef and trying to not poison herself or others with her cuisine experiments.

Where to find A.M. Arthur:
Contact her at am_arthur@yahoo.com with your cooking tips (or book comments). You can also find her online (http://amarthur.blogspot.com/), as well as on Twitter (http://twitter.com/am_arthur), Tumblr (http://www.tumblr.com/blog/am-arthur), and Facebook (A.m. Arthur). A.M. Arthur's work is available from Samhain Publishing, Carina Press, Dreamspinner Press, and Musa Publishing.

A.M. Arthur - Well, it’s probably going to sound trite, since he’s in the book I’m promoting right now, but definitely Tristan Lavalle from The Truth As He Knows It. I did not expect that, either, when I sat down to write the novel. I knew who he was in general, but as I wrote his interactions with his best friend Noel, he became so much more. He has such a fun-loving spirit, and that has been beaten down by his mental limitations. He was a heartbreaking and unique character to write, and I really enjoyed writing his love story (which comes out in October).

Q - Are there any particular character(s) that have ‘spoken’ to you louder than others?  Did you give into their demands?
AMA - Besides Tristan? Definitely David Weller (Foundation of Trust). That man is the textbook definition of stubborn and self-destructive. I wasn’t entirely sure how his book was going to turn out, and there were a few times while writing that I wanted the story to go one way, and he was like “nope, we’re doing this instead.” It made the writing process very interesting.

Q - Do you have a playlist when you’re writing? If so, care to share a few songs with us?

AMA - I don’t actually have any particular playlists. I used to have music on all the time while writing, but now I mostly write to silence. I think I get less distracted that way. Sometimes if I need help getting into a particular mood, I’ll put some instrumental music on. Some of my favorite scores are from “Band of Brothers” and “Dante’s Cove.” If I put on music with lyrics, usually it’s when I’m editing, rather than writing.

Q - In your downtime from writing do you read or watch TV/movies? What’s the last book you read or movie/TV show you completely loved?

AMA - Yes to all of the above. I haven’t watched a lot of movies lately, and I’m not sure why. I have to be in a particular mood, and then I have to find the movie that fits that mood. I tend to lean toward SF/F and horror in particular. As for TV, I am captivated by “How to Get Away With Murder.” That show is so brilliantly written and constructed, and every episode ends with a “Wait, what?” moment that keeps you hanging until the following week. It’s TV crack.

The last book that really blew me away was Sex & Violence by Carrie Mesrobian. It’s a YA novel from a teen boy’s POV, and it’s such an interesting study of how sex and violence can be inexplicably tied together, especially within the world of teenagers and dating. It was very, very well done and it stayed with me for a while afterward.

Q - Do you have a genre that you haven’t written a book in, that you’d like to? Any plans to do so?

AMA - I’ve done paranormal, and I’ve done contemporary, both within m/m romance. I think I’d like to try an historical m/m romance at some point, maybe set in the old west. I love that time period. It’s my favorite part of American history. Outside of romance, my dream project is to write about local legend/ghost story about a woman who used to invite travelers into her home, and then murder them. I’ve collected a bunch of different ghost story collections with her story in them, so I have the research. I just need to figure out what to do with it. 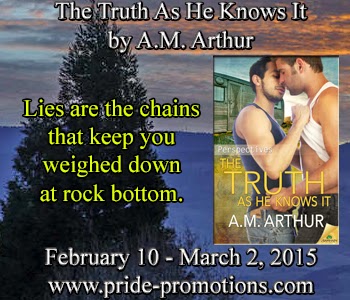 Rafflecopter Prize: E-book of ‘Truth As He Knows It’ plus an additional book from A.M. Arthur’s Backlist