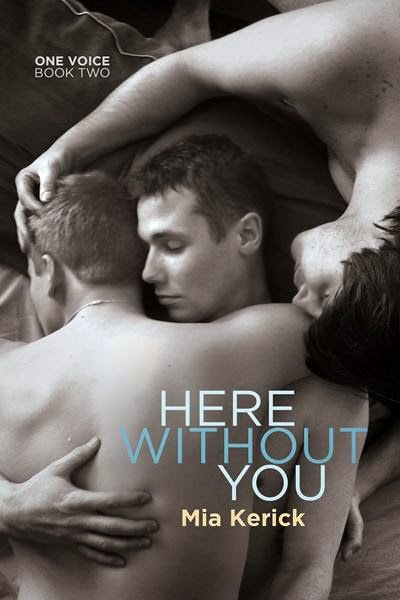 Book Name: Here Without You
Book two of the Once Voice series. Can be read as a standalone, but not suggested.
Release Date: February
Author Name: Mia Kerick
Publisher: Dreamspinner Press
Cover Artist:  Paul Richmond (Photograph by Dan Skinner)

With all of his scratched and dented heart, Nate DeMarco wants to be two places at once, but he’s been forced to make an unbearable choice. Having barely survived high school, Nate and his boyfriends, Casey Minton and Zander Zane, are ready to move forward in life. Casey and Zander have left home to attend Boston City College. Nate remains in New Hampshire to protect his volatile younger sister from their increasingly violent, alcoholic uncle. Nate suffers with anger, resentment, and loneliness as he battles what he wants against what he feels he must do.

Now separated, the young men fight to stay in contact. However, they’re each faced with their own separate issues. Casey must cope with residual fear from having been bullied in high school. Zander obsesses over the establishment of One Voice, the new gay-straight alliance at Boston City College. Nate fights for his sister’s very survival. Meanwhile, the intensity of the boys’ relationship increases, both sexually and emotionally, as happens in long distance relationships.

Nate’s futile effort to live two lives leads to tragedy, which blasts Nate, Casey, and Zander apart. Can the three young men find their way back to a united path before it’s too late?

August 23 (they only been gone about half a week now)

SO MAYBE this is a bit fucked up, but I’m gonna put it down on paper in black and white, and maybe when I read it back to myself, it’ll seem more normal.

Here’s the thing. Like Casey says, us three is a throuple. Three dudes in love. Whatever. Cuz I sure as shit love them guys, and nothin’s gonna change that. So, yeah. There’s two dudes in place A and one dude, alone, in place B. I just figured them two would be gettin’ busy in bed in their fancy dorm room whenever they had a chance—cuz that’s what guys do, right?

Well, apparently not so much. Last night they Skyped me. There them two were, sittin’ all cozy on Casey’s rainbow-colored bedspread. The floppy stuffed unicorn that me and Zander gave him for Christmas junior year was propped up behind ’em, starin’ at the computer, like it was lookin’ right at yours truly. I felt real alone and a little like a loser (fucked-up fact is they only been gone a couple days), but I leaned back on my bed and acted like I didn’t give a shit.

Casey said, in this adorable proper voice, “Nate, there’s a topic Zander and I feel it’s imperative we discuss. It’s a matter of great importance.” He already sounds like a doctor, and he’s only a freshman in college.

Zander was just starin’ into the computer at me, sorta studyin’ my I-don’t-give-a-shit-about-nothin’ expression.

“What’s such a big friggin’ deal, babe? Lay it on me.” That was pretty cool soundin’, I thought.

“Well, Zander and I want to have a discussion about.... Nate, we want to discuss physical intimacy. In that....”

Even on Skype I could see that two spots on Casey’s cheeks had turned bright pink. Looked like he was having trouble spittin’ this out. And he was the talker in our throuple.

“Zander and I are here together, without you, and we’ve talked about this—”

“I expect you two’ve been goin’ to town on each other every night since you got to college and are prob’ly itchin’ to strip each other down right now.” Both of my guys’ eyes popped open wide when I said that.

“Actually, Nate.” Zander spoke up cuz it seemed that Casey was suddenly at a loss for words. “We haven’t, and we’re not gonna.”

Mia Kerick is the mother of four exceptional children—all named after saints—and five nonpedigreed cats—all named after the next best thing to saints, Boston Red Sox players. Her husband of twenty-two years has been told by many that he has the patience of Job, but don’t ask Mia about that, as it is a sensitive subject.

Mia focuses her stories on the emotional growth of troubled young people and their relationships, and she believes that physical intimacy has a place in a love story, but not until it is firmly established as a love story. As a teen, Mia filled spiral-bound notebooks with romantic tales of tortured heroes (most of whom happened to strongly resemble lead vocalists of 1980s big-hair bands) and stuffed them under her mattress for safekeeping. She is thankful to Dreamspinner Press, Harmony Ink Press, and CreateSpace for providing her with alternate places to stash her stories.

Mia is a social liberal and cheers for each and every victory made in the name of human rights, especially marital equality. Her only major regret: never having taken typing or computer class in school, destining her to a life consumed with two-fingered pecking and constant prayer to the Gods of Technology.

Where to find Mia:


Q - What could they invent that would make your writing career easier?
Mia Kerick - Maybe it is already invented, but if it is I don’t have it. I would like an “easy button” on my computer that automatically copies everything on my computer and saves it to a huge USB when I press it, but that I don’t have to save things by dragging then manually to virtual safety. It would completely relieve me of the stress that I am going to lose everything on my computer like I did at the very end of December 2014.

Does this thing exist? If so, where can I get one?

Q - Any author, past, present, or future: Who would you like to collaborate with?
MK - I was extremely inspired by Stephenie Meyers’ character Edward Cullen of Twilight. In fact, he is part of the reason I was inspired to create the character Brett in Beggars and Choosers—beautiful, damaged, and hopelessly in love. So, I would love to collaborate with Ms. Meyers, and maybe together we could create a character as wonderfully tortured as Edward and Brett, but who needs the love of another man to save him.

Q - How do you divide up your day? (Work, writing, family, etc)
MK - I sleep ‘til nine and meanwhile, the kids get themselves off to school with the help of their father in the morning. I spend the remainder of the morning catching up on emails and promoting on Facebook, as well as doing the stuff that needs to get done around the house like laundry and dishes and cleaning. Until my kids get home from school, I write either the current story I am working on, do serious editing, or create blog posts. I try to focus on my family until they go to bed, and that is when I pick up on my work as an author again. Often, I work until I have a nightly chat with a close friend of mine who is also an author. I’m off to bed by two or three in the morning and I get up at nine AM to do the same thing all over again.

Q - Do you have any pets? What kind? Names?
MK - Yes, I have pets. Five cats to be exact. Pepper is our oldest cat (we call Papi), Lester (tiger cat named after pitcher Jon Lester), Maddie (skittish tiger cat), Cookie (tortoise shell Himalayan), and we just got the kitten Mochi (short-haired exotic calico.) 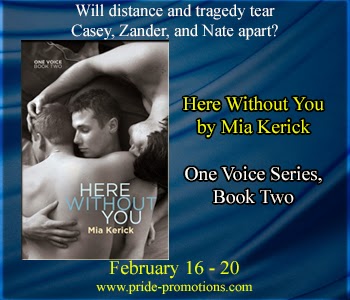