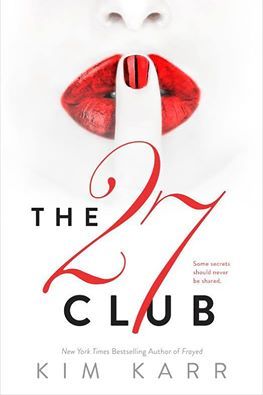 You don’t know when…
You don’t get to choose if…
When it’s time to join…you’ll know.
You might think you want to be a member—but trust me this is one club you don’t want to join. It’s not a place where people go to live out their deepest, darkest sexual desires—there are no handcuffs or blindfolds.
The 27 Club only admits those who die young and tragically. My brother was recently bestowed membership and joined many of our ancestors before him. I know I’m next. This is my destiny, and I was ready to yield.
But then I met Nate. He awakened a sensuality in me that had never been explored, never satisfied. I knew then I could no longer accept my destiny. Nate’s presence controls me. I’m overwhelmed by his touch, his words; my every thought is consumed by desire. I believe he was brought into my life for a reason.
Nate doesn’t believe in destiny.
But I do.
And if there’s a way to cheat it—I must.
View a book trailer here:  https://vimeo.com/109601829 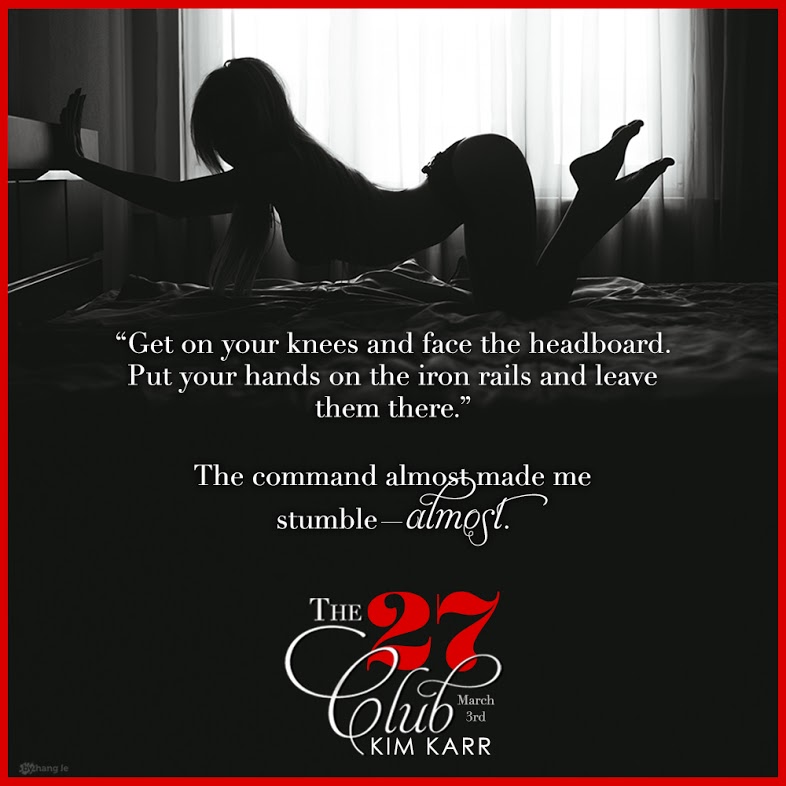 The wind howls and the palm trees whip against the windows as the storm seems to make its way closer to landfall. Thunder booms and lightning lights up the room, startling me. No, not lightning—a lamp.

“Hello, Zoey.” The voice is deep and husky.

As the sound registers, I scream. I quickly sit up and scan my unfamiliar surroundings. My eyes immediately land on the silhouette of a man standing beside me, and I scream again, this time scrambling off the bed in terror.

In this moment, my heart stops beating, my lungs stop breathing, and my brain stops thinking. I’m petrified.

The man raises his palms up in surrender. “Zoey, I’m Nate, Z’s friend. You don’t have to be scared. I’m not going to hurt you.”

My fear must be evident. I stare at him for a few long moments, both alarmed and trembling. Only once realization sets in, that yes, this is Nate, my brother’s best friend, do I attempt to calm my ragged breaths.

He takes a cautious step back. “Just cover up with something so we can talk.”

Oh my God, my clothes.

Tangled sheets catch on my limbs as I climb back onto the bed and unsuccessfully try to pull the covers over my practically naked body. Before humiliation grabs complete hold of me, I give up and dive for my soaking wet shirt lying on the floor.

Sliding the cold fabric over my head, I pull it down to cover my panties and stand up, quickly crossing my arms over my chest to shield any signs of the chill I’m feeling.

Not great, but better. At least I can look at him with a little dignity.

Finally, I glance up and my gaze catches his. As soon as it does, he drops his eyes.

The photos I’ve seen of him over the years, when my brother would text me a funny shot—a selfie of him and Nate at some top chef restaurant, at the beach, or at a coffee house—didn’t nearly do him justice. Those shots were goofy poses with baseball caps turned backwards and funny faces. Not that I didn’t think he was good looking in them, because I did, but there’s just something different about him.

I blink and focus on the matter at hand. “You scared the shit out of me. What are you doing here?”

Staring at the ground, he leans against the door jam. “You beat me to the punch. I was just about to ask you the same question.”

“Why would you ask me that?”

He raises a brow. “I guess I’m just curious.”

His gaze lifts, and those eyes, those bewitching emerald green eyes, stare back at me. “Not that I mind that you’re here. It’s just—a little warning would have been nice. That’s all.”

His tone is more bemused than apologetic.

I’m not sure what to think.

With a straight and confident stance, I clear my throat. “I e-mailed you earlier today to let you know that I was coming for the weekend. I’m really sorry about the late notice, but I decided at the last minute.”

He reaches into the pocket of his low-slung jeans and pulls out his phone. After a few taps and scrolls he looks up at me. “I guess you did. Here it is. I’m usually on top of my e-mails but today my . . . schedule was full. Had I seen your message, I would have tried to rearrange my plans.”

I steal a glance at my reliable Timex—just after midnight. What is he doing in my brother’s house in the middle of the night? Just as I’m about to ask him, my eyes catch sight of the way he predatorily walks around the room and I’m momentarily distracted. He moves like a panther— slowly circling his prey, keeping his distance, not too close, but close enough to pounce if he feels the urge. He settles back against the wall, just a little closer now. “Zoey, did you hear me?”

His tone grows more insistent. “I said I would have at least sent a car for you. You shouldn’t be out in this weather on your own.”

My brow furrows. Why is he still talking about the airport?

When I don’t respond, he crosses his arms over his chest like he owns the place.

It’s then that reality sinks in. And as cliché as this sounds, I am not going to let Mr. Tall, Dark, and Handsome intimidate me. It’s time to take charge. “There was no need. I managed just fine. But if you didn’t know I was coming, can I ask what you’re doing here?”

Confusion seems to have taken over his thoughts as he steps even closer—moving with a lethal grace that makes my body start to hum. I can’t help but study him as his features come into clear focus. His body is long and lean. His hair is dark, the most unusual shade of brown, maybe like the color of expensive chocolate, but not exactly. His eyes are languid, watchful, and the most beautiful shade I’ve ever seen—darker than emeralds or the deepest of forest greens. His
lips look full and soft. He is handsome in a way that is unlike anyone I’ve ever seen.

My mind is going haywire.

A look of realization seems to cross his face as he stares at me.

“Nate, why are you at my brother’s house in the middle of the night?” I ask him again.

With a smirk, he ignores my question. Instead of answering me, he opens the door beside him. It’s a closet, Zach’s closet to be exact, and he steps right in, again like he owns the place.

“What are you doing?” I ask impatiently.

He comes back into the bedroom with a pair of sweatpants and a T-shirt in his hand. “You’re trembling. How about you get changed and we sit down to talk?”

The audacity of this man is beyond comprehension. From his e-mails he seemed nice, but then again, you never can tell what lurks behind the words on a computer screen.

He stares and his small smirk really irritates me. “Take these, they’re mine. I’ll wait downstairs while you get changed.”

If I weren’t standing here, chilled and in my underwear, I might just tell him to go to hell. But instead I reach for the clothes, and as I do, I start to wonder if he’s been squatting in my brother’s house. Once the clothes are in my hands, his mouth spreads into a slow, easy grin.

Annoyance grabs hold of me as I pivot on my bare feet and head toward the bathroom, making sure not to glance over my shoulder. When I hear heavy footsteps, I let my body fall back and shut everything out of my mind for a few short seconds.

What is going on?

When I’ve gathered my composure, I quickly strip out of my wet clothes and redress. Then I make the mistake of looking in the mirror. A wet dog would look better than I do right now. In an effort to improve the image, I grab a towel and wipe the black mascara from under my eyes. Then I use my fingers to comb through my mass of curls and try to calm them, but that’s nearly impossible.

It’s not like I’m trying to impress him. In fact, I’ve never tried to impress a man. 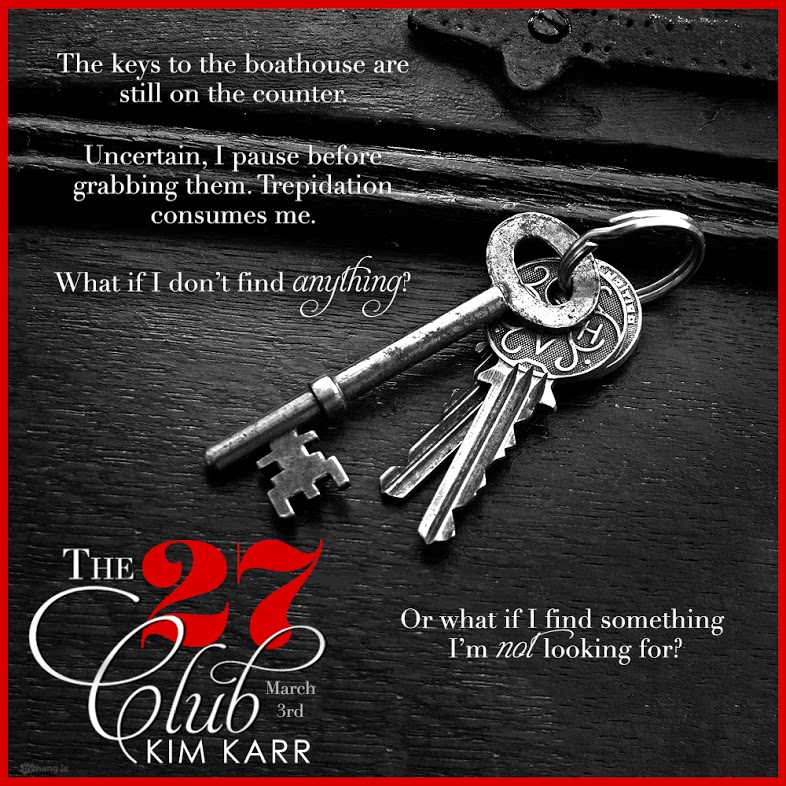 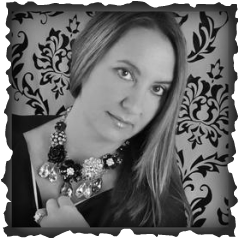