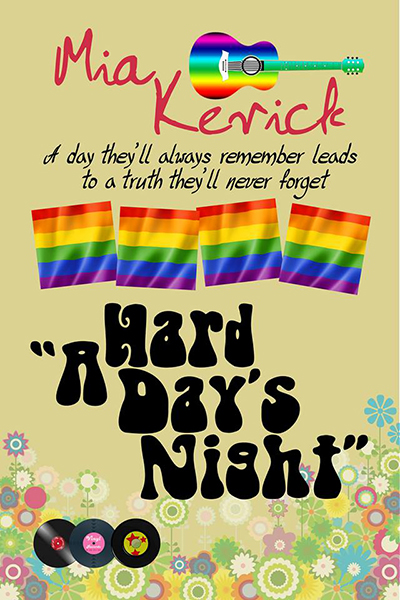 High school senior Kalin (Lennon) Macready knows several facts for certain: John Lennon is his hero. Beaumont Finley Danforth II (Fin) is his best friend. And—this is the complicated one—he feels more for Fin than mere friendship.
For weeks, Lennon pesters Fin, who like Lennon admits to questioning his sexual orientation, for a commitment to spend twenty-four hours together exploring “the gay side of life.” Fin reluctantly agrees. Each boy will seek to answer the daunting question, Am I gay? Lennon pre-plans the day, filling the hours with what he assumes “gay life” is all about: shopping for fashionable clothing, indulging in lavish dessert crepes, boogying to Taylor Swift’s “Shake it Off”, and yes, listening to show tunes.
However, Lennon quickly realizes that in creating his plan he has succumbed to the most common and distorted of gay stereotypes. Can he be gay and not fit them? And more importantly, is it possible that spending one very hard day and night together will help Fin accept that he’s gay, too? If so, maybe Lennon has a shot at winning the heart of the boy of his dreams.
“A Hard Day’s Night” is an amusing young adult contemporary romance about two boys who seek to discover if they must fulfill stereotypes to be together.
In the end, maybe all you need is love.

Excerpt:
“Fin and I have managed to get locked into what I will refer to as a repetitive pattern of affable behavior, and, in my opinion, it’s working out splendidly. We are the dearest of friends.”
Scratch that. Starting over.
And since I know it’s well past time for some brutally honest self-talk, I sit up in my bed, and by the warm glow of my Yellow Submarine nightlight, study my frayed picture of John Lennon. To complete the visual, it’s the photo from Mom’s retro record set, The White Album, that I pinned to the wall beside my bed and have worshipped regularly since I was in the seventh grade. Behind those round wire glasses, the man’s piercing eyes don’t lie—John was a brutally honest sort, often to his detriment. After all, back in 1966 didn’t he assert that The Beatles were more popular than Jesus Christ? Now, that is certainly calling it exactly as he sees it.
Not that I necessarily agree with the sentiment, I respect that kind of direct- ness in a person.
I owe him this much.
Out of respect for John, I revise and reissue my previous assertion.
“The Finster and I are stuck in a rut of pleasant compatibility... an unusually
deep rut, at that.”
This attempt at telling-it-like-it-is is definitely an improvement, but it’s still
not right on the money, and I’m nothing, if not specific.
I prop up my pillow and lean hard against the creaky antique headboard (call it like you see it, Lennon—the headboard is just plain old), with the certain knowledge that I’ve completely outgrown this flimsy, twin size bed of my childhood.
So maybe it’s more like this....
“Fin and I each have one leg semi-submerged in a muddy ditch, and we’re in it well past our knees. This is the kind of murky and dark, seemingly bottomless, pit that will suck the rubber boot right off your foot with a single, hollow, slurping sound, and then belch with satisfaction.” For the third time I speak aloud in an effort to make my declaration official. “It appears that the two of us are gonna be stuck here in this mucky BFF-swampland for the long haul— bootless and slowly sinking into the sludge—unless, of course, I act decisively and with haste. And with great vigor—because, to accomplish the task I have in mind, I’m most likely going to have to shift into full-hyper-dunk-mode, possibly coupled with the drama-queen-approach. Neither of which poses a problem for me, other than that they require an excessive expenditure of energy.”
That was most definitely a mouthful, but an accurate mouthful.
And all I need is one day. Just one gay day.
Thankfully, ever proud of the open-mindedness he hides so well from his ultra-conservative family, Fin has granted me my greatest wish. On Saturday, March 21st, Beaumont Finley Danforth II (IMHO this BFD is a Big Fucking Deal) is mine for the day to do with as I please. I sincerely hope that a single day is sufficient to help Fin figure out what I already know.
Um, Lennon...maybe now is not the right time to start suffering with a debilitating bout of self-doubt.
Confidence is of key importance in this endeavor.
No, I do not have any worries, and yes, I do have twenty-four feminine-side-ex- ploring, team-switching, relationship-igniting hours to make my homeboy see the rainbow-hued light. Starting bright and early tomorrow morning.
On that note, I’ll get started with my beauty sleep. I sure hope I’m gonna need it.
I wiggle down so I’m flat on my back with my feet sticking six inches over the end of the bed, pull the covers up to my chin, and listen to my mental arrangement of “Imagine” until I fall asleep.

Mia Kerick is the mother of four exceptional children—all named after saints—and five nonpedigreed cats—all named after the next best thing to saints, Boston Red Sox players. Her husband of twenty-two years has been told by many that he has the patience of Job, but don’t ask Mia about that, as it is a sensitive subject.
Mia focuses her stories on the emotional growth of troubled young people and their relationships, and she believes that physical intimacy has a place in a love story, but not until it is firmly established as a love story.

As a teen, Mia filled spiral-bound notebooks with romantic tales of tortured heroes (most of whom happened to strongly resemble lead vocalists of 1980s big-hair bands) and stuffed them under her mattress for safekeeping. She is thankful to Dreamspinner Press, Harmony Ink Press, and CreateSpace for providing her with alternate places to stash her stories.

Mia is a social liberal and cheers for each and every victory made in the name of human rights, especially marital equality. Her only major regret: never having taken typing or computer class in school, destining her to a life consumed with two-fingered pecking and constant prayer to the Gods of Technology. 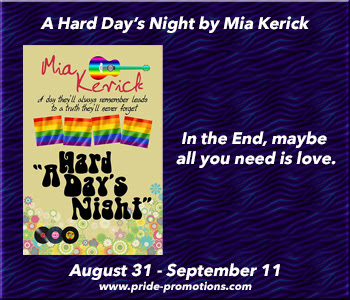 9-Sep Because Two Men Are Better Than One, Parker Williams