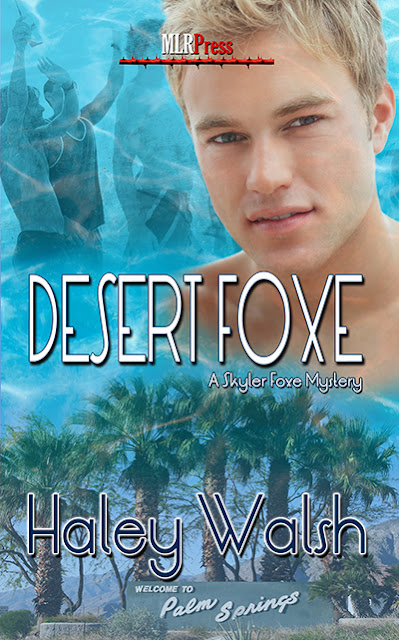 Skyler and his friends go to Palm Springs for the annual White Party and find murder!

Out and proud high school English teacher Skyler Foxe and his posse of friends go to the annual Palm Springs White Party for a weekend of fun, frivolity, and luscious men. But there are boy troubles of all kinds ahead. Skyler's boyfriend and high school coach Keith Fletcher has to endure an embarrassing number of Skyler's former hook-ups, one of the SFC might be going solo, Skyler encounters unexpected and unwelcome participants at the party, and there's a murder on the dance floor, literally at Skyler's feet! Both Skyler and Keith are drawn into investigating more than murder when the FBI asks Skyler to do the unthinkable.

Taquito Grill was crowded for a Sunday night. Jamie and Dave had arrived not long after Skyler and Keith. Jamie, hair spiked and a fire engine red in honor of his firefighter boyfriend, clung to Dave’s arm and bounced in his seat. “We’re so excited about Palm Springs,” he squealed. Dave grinned at him fondly. “It’s going to be so much fun with Dave there.” He patted the large bicep. “And we both agreed that we can dance with other people. Isn’t that cool?” Dave nodded. “Just as long as we keep our hands above the waist.” Jamie demonstrated with jazz hands in the air.
Skyler glanced hopefully at Keith, but the man was scowling into his bottle of Dos Equis. With a defeated sigh, Skyler sat back against the bench seat. Part of the fun of the White Party was dancing with a bunch of different partners. But, he had to admit, the other part of the fun was hooking up with them, too. Under the table, he rubbed conciliatory circles on the man’s hard thigh.
Keith’s tensed muscles seemed to relax under Skyler’s ministrations and he flicked a glance at Skyler with a sheepish smile before putting the beer bottle to his lips.
“Oh, and Dave,” Jamie rambled on, “we are staying at a huge hotel. It’s fantastic. Humongous pool. And some of the activities will be there.”
“Activities?” said Keith for the first time since ordering his drink.
Jamie leaned across the bench seat toward him. “Well! One of the activities is the Splash Pool Party, with live music. It’s all day. Nothing but beautiful shirtless men in tiny white swim trunks.”
Skyler wondered if Keith’s brows could furrow any deeper.
“White? So you have to wear white?”
“It’s a ‘white party,’ Keith,” said Skyler. “Hence the name. We wear white. And you’d look fabulous in white, with your dark skin tones.” He squeezed Keith’s thigh under the table.
Keith seemed to be thinking his own thoughts about that as he studied Skyler. “You’d be in white, too. I love you in white.”
Skyler blinked. “You do?” He melted against Keith. He couldn’t help it when the man looked at him with those sultry eyes.
“Save it for the White Party,” said Jamie.
Dave turned his head toward the door. “Philip and Rodolfo. Finally! …Uh oh.”
They were in mid argument and hadn’t taken their narrowed eyes off each other as they made their way to the table. Rodolfo sat hard and crossed his arms over his magenta shirt. Philip settled on his chair and pointedly looked away from his Ecuadorian boyfriend.
Skyler instantly went on alert. “What’s the matter with you two?”
“Nothing this pene doesn’t know about,” said Rodolfo, waving his hand. His wrist clanked from his bracelets.
“Don’t start with the name-calling,” said Philip, rounding on him and pushing up his black-rimmed glasses. “Can we just stow it for now?”
“Stow it? Stow it? Fine. I can ‘stow it.’”
“Then please do,” muttered Philip, menu in front of his clenched mouth.
Rodolfo slapped his menu to the table and jerked toward Philip. “Do you know what is wrong with you, Philip?”
Clutching his menu, Philip closed his eyes and sighed. “No, but I’m sure you’re going to tell me in florid detail.”
“You have no sense of fun or adventure. Now take amante here,” and he gestured toward Skyler.
Skyler grabbed for his margarita. “Leave me out of it.”
“Skyler has a keen sense of adventure. And look. There is Keith. He is more than willing to go to the White Party with his lover.”
“I don’t know about more than willing,” muttered Keith.
“But not you. You with your timetables and schedules and graphs and bullet points.”
“I’m just mapping out our weekend. Is that so horrible? There’s a lot to do! Things to see! Men…to avoid.”
“AHA! That’s it, isn’t it? It all comes down to this.”
“Rodolfo…”
Jamie stuck his long arm between the two. “Hey! You guys! You’re not supposed to argue anymore. Not since you started fucking.”
“Jamie,” said Skyler out of the corner of his mouth, eyes searching the busy restaurant. “Keep your voice down. Family place.”
He scrunched up his face at Skyler—as close to a sneer as he got—and leaned into the arguing couple again. “The fact is that you guys are supposed to get along now.”
“I’m getting along just fine!” said Rodolfo too loudly. “It’s him that isn’t getting along with me!”
Philip slumped back in his seat. “Oh, for the love of God, give it a rest already.”
“Give it a rest? Yes, that's exactly what I should be doing.” Rodolfo threw down the menu and lurched to his feet. “I’m suddenly not hungry.”
Philip clenched his menu so tightly it bent at the edges. “Well I am.”
“Fine! Stay here. Eat. I’m leaving.”
“Bye! Don’t let the door hit you on the way out… Much.”
Rodolfo threw his glare at each in turn before pivoting and stalking toward the entrance. He pushed open one heavy wooden door and let it swish shut. There was a pause as the restaurant patrons fell silent and stared at the double doors a split second before they were thrown open again and Rodolfo stomped toward the table. He stood over Philip with his foot tapping.
“I don’t have the keys to the car.”

Philip Price (and don’t call him “Phil”!) was heading for law school when one day he woke up and decided, “Fuck it!” It was too much work. So he enrolled in the University of Redlands and went for a business degree. After he graduated he put that know-how to good use, used the rest of his savings that he was going to use for law school and opened The Bean, Redlands home-grown answer to Starbucks. He met Skyler at Trixx, the local gay bar, and they spent a week fucking nearly nonstop. But as soon as he invited Skyler to The Bean, it was all over between them. Skyler always seemed to put up walls when he got close to someone outside of the hooking up part and they became friends. Philip doesn’t regret it because now he met someone with whom he really clicks, and he’s one of Skyler’s bosom buddies, part of the SFC. Philip’s even been dragged into helping Skyler solve crimes, but more often than not his voice of reason is more like a lone voice in crying in the wilderness.

Wicked Faerie's -  What is your biggest fear?

Philip Price - My business going under. A huge earthquake. Global warming. A Republican in the Whitehouse…you name it, it’s a fear.

WF - What is your most prized possession?

PP - The Bean. I’m so darned proud of that place. There I was heading for a law degree and I was sitting in class listening to the professor drone on about that statute and this precedent and I realized how bored stiff I was. And did I really want to be stuck in an office the rest of my life? I wasn’t going to be a trial lawyer. Oh no, I chose to specialize in business contracts. Gag me. I was drinking that god-awful coffee in the student union when I decided to open a business, the best darned coffee house in town. And I truly think I have.

WF - What do you enjoy doing on your day off?

PP - It’s hard to have a day off when you run a business, especially when your biggest competitor is, well, the biggest competitor—the business that-must-not-be-named—but I do find time for my own pursuits. I get to art galleries and fine dining. I’m a bit of a foodie and try to get to a few conventions when I can.

PP - My sister came out the same time I did. I thought my parents were going to explode. Both their children gay! The white middle class nightmare. But they were okay with it—after the yelling, the accusations. My sister is older, so she took me to my first gay bar. A very strange experience thinking about picking up guys when you’re with your sister…who is trying to pick up girls. I don’t know if that’s my best memory but it’s certainly my most memorable memory.

WF - Where do you hope to be in five years?

PP - It might be possible to expand, open another store in San Bernardino. I don’t know how I’ll work that but I’m thinking that maybe my boyfriend could manage it. I don’t trust a whole lot of people and he’s already in the food business so it could work. But with the stock market’s ups and downs it’s been hard to put aside the funds. At any rate, I do have plans to be the gay mob boss of my own coffee empire. At least in my own mind.

Haley Walsh tried acting, but decided the actor’s life was not for her. Instead, she became a successful graphic designer and art director in Los Angeles, her hometown. After fifteen years of burning money in the ’80s and early ’90s, she retired from the graphics industry and turned her interests toward writing. She became a freelance newspaper reporter, wrote articles for quirky magazines, published award-winning short stories, and now writes a critically acclaimed GLBT mystery series, the Skyler Foxe Mysteries. She’s lived all her life in southern California, sampling wines and chomping chocolate.

Oh, and she also writes a multi-award nominated medieval mystery series under another name. Yeah, it’s a living. http://.SkylerFoxeMysteries.com 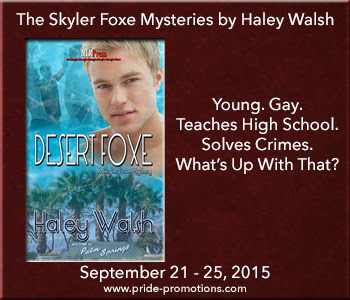 Rafflecopter Prize: An E-book or Audiobook copy of ‘Desert Foxe’