Chelsea’s hottie Blake Morgan III has reemerged from a nasty breakup. His marriage was a frigid disaster beyond repair, and he vows to be single—forever. Bruised, but still hot in Prada, he creates his Seven Desires wish list, his sexiest imaginings. Blake soon realizes there’s only one man he may trust to make these uninhibited intentions come to fruition: his best friend Miguel Santana.

Lower East Side multimedia artist extraordinaire Miguel Santana may be known as the cocky Latin stud in the city, but all he’s wanted since college was Blake’s hand in marriage. He was livid when Blake walked down the aisle with the wrong guy. Miguel has his own list titled the Seven Needs, which are quite contrary to Blake’s dirty-boy deeds. They involve serious commitments, which may leave his new-to-the-singles-scene buddy sprinting for the door, destroying any hopes Miguel has for happiness.

Can these two hunks conquer their intimate fears and love one another as only best friends can? Join the star-studded cast in The Manhattanites series and see for yourself!

He went over and peeled his nylon sweats off as Miguel watched, then dropped to his knees on the mattress. Game on. He lowered his shoulders and crawled forward, palms out as a panther approaching a meal. Hungry, reaching for his friend’s cock with his right

hand, Blake stroked his shaft with his left. He witnessed his friend’s eyes roll back in pleasure. Other than his own, he hadn’t held a cock in his hands in years. Miguel’s pink head deserved his attention. A little freaked out by how easy this was, by how natural it

felt, Blake tried to stay calm and just go with it.

Miguel moaned louder in Spanish then ordered, “You’re going to be a good niño and suck my cock.”

Nodding in agreement, he asked, “And then?”

“Don’t use your hands.” Cupping his fingers around Blake’s jawline, Miguel brushed his thumb over his lips.

“I’ll keep my hands behind my back.” He clasped his palms by the floor.

“Once I’m nice and hard, I’m gonna face-fuck you, hard.” He glanced down at his dick. “When I come, you’ll swallow me—whole, understand?”

“Is there anything else, boss man?” He pretended he’d swallow, but would spit it out, like they did in adult films. Yes, that was what he’d do. Or take it on his chest, or maybe his face. Maybe.

Miguel rested himself on the mattress. “Get started.”

Supercharged with enthusiasm, he leaned forward and nipped at Miguel’s dick. He ran his tongue in long strokes along his shaft. Spice, sweet and exotic, enveloped his senses. By far the biggest he’d seen, the dick was thick, too. Licking under the shaft, he

produced enough lube to do his duty.

“Ah-huh…” He couldn’t believe he was doing this.

First, his lips glided down. The satiny penis head hit the roof of his mouth. He opened wider. A dive down further pressed his face all the way up against the crotch. The black pubes tickled his cheeks.

The cock twitched and slid in more. Deeper. Careful not to scrape the skin, his two front teeth rested at the base of his dick.

He looked up at his Latin God with a grin.

Miguel blew him a kiss and seduced Blake to continue. As their playfulness increased, he wondered for a split second what else he’d do for his best friend.

His tongue laced the nuts as he took him in further. Still nervous to pump the dick with his mouth, he continued to suck, sweetly. His nostrils burned. He thirsted for more.

His top became more fired up. 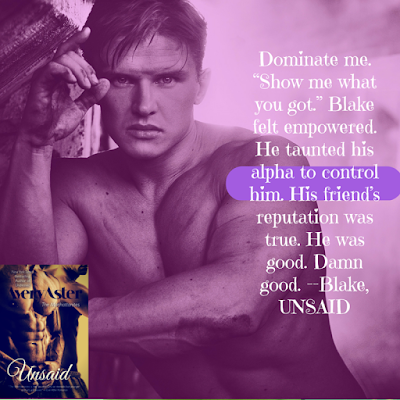 As a resident of New York City and a graduate from New York University, Avery gives readers an inside look at the city’s glitzy nightlife, socialite sexcapades and tall tales of the über-rich and ultra-famous.