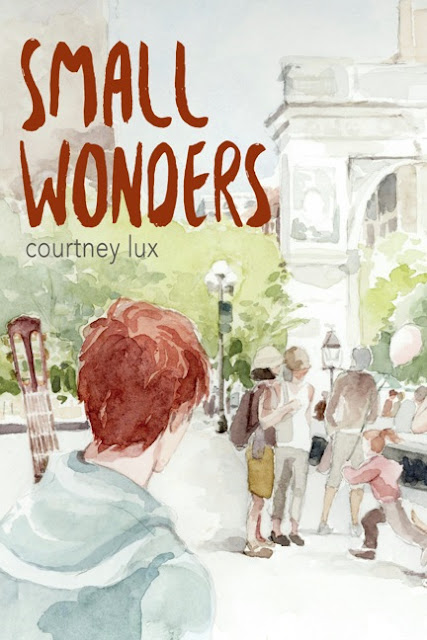 A pickpocket who finds value in things others do not want, Trip Morgan meets and becomes involved with Nate Mackey, a down-and-out former Wall Street professional who looks eerily like a child in a photograph Trip found years before.

It’s part of a collection of stolen trinkets he’s collected since he arrived in New York. He keeps it all close and works out a life he could have if he could ever let someone keep him long enough for him to build up a treasure trove of small wonders all his own.

In confronting their own demons and finding value in each other, Trip and Nate may find that their relationship is a wonder of its own.

Excerpt:
Today, he has encountered no southerners and only a few tourists from elsewhere, and he'd be okay with that if it weren't for the rain. It comes fast. One minute it's sunny and lovely and easy pickings, and the next the sky's gone black and people are running from the park with street-vendor umbrellas popping open over their heads or shopping bags held up as makeshift shields. Trip switches to catchy pop numbers and more recent music, but it's no use.

Some days this works. People take pity on a not-quite-twenty-something singing in the rain. Older women especially seem to take in the auburn hair stuck to his forehead and his relatively petite stature and read hungry young desperation in him. They offer him sympathetic smiles and a few soggy dollars.

Other times, playing in the rain has the opposite of his intended effect—strange boy with strange eyes playing his guitar as if he doesn't know the rain is there. Those people see the darkness in him: a boy with a chip on his shoulder that makes them nervous. Those people give him wary looks and a wide berth. Trip's not sure he blames them.

He's a little put out and a lot cold, so he sells his umbrella for a few dollars before shouldering his guitar and closing the lid on his coffee can to set to work at his other favorite occupation.

He'd been a decent pickpocket in his younger years, but now, after a lot of practice, he's a better thief and a good runner when he needs to be. Not that he steals anything of particular worth. He finds value in treasures scrounged from the bottoms of pockets.

Loose change, hair binders, halves of Vicodin, broken cigarettes, crumpled matchbooks. All of it has a purpose, a certain sense of importance. He envies women and their big purses. They've got whole bags of riches waiting to be exhumed. Though, more likely than not, those little trinkets will remain forgotten and neglected in the bottoms of Marc Jacobs clutches and Target sale hobo bags.

Other people don't see it—the value in these things. Maybe that's why he steals from them. Nothing they'd miss: a worn dollar here, a business card there. He keeps it all close and works out a life he could have if he could ever let someone keep him long enough for him to build up a treasure trove of small wonders all his own.

For now, he will live with worn shopping lists, broken crayons and ticket stubs he lifts off of others. He keeps them in a beaten-up bag that is more duct tape than canvas and lets them build up stardust. Then, in those lonely hours of the night, he scatters them across the floor and works them into constellations to which he assigns stories. Some he writes down; others, he forgets before the next day. It's not a financially savvy task, but it's his favorite, and it passes the time as well as anything else.

Author Q & A with Courtney Lux

Today I’m very lucky to be interviewing Courtney Lux, author of Small Wonders. Hi Courtney, thank you for agreeing to this interview. Tell us a little about yourself, your background, and your current book.

Hi and thank you for having me! I am a Minnesotan-turned-New Yorker, and I am actually a part-time writer. I got my B.S. from the University of Wisconsin-Madison and I’m finishing an M.S. at New York University in Communication Sciences and Disorders, so I live a bit of a double life. While working my way through graduate school, through a series of a lot of late nights and days spent in coffee shops, I wrote my first novel, Small Wonders.

Small Wonders is the story of Trip Morgan, an individual who ran away to New York City from a hard home life in the south when he was only sixteen. Trip is living with an eclectic band of roommates and he makes a meager living working as a busker, and, at times, as a casual sex worker in order to keep surviving in the city. Trip entertains himself pickpocketing inconsequential items off people, but when he “accidentally” lifts a wallet off of Nate Mackey, a 26-year-old working in finance, he is struck by the uncanny resemblance of this man to a child in a photograph he found years before. Trip and Nate meet and form a sort of unconventional relationship and really work to navigate both themselves and one another.

Wicked Faerie's -     Give us an interesting fun fact or a few about your book or series:
Courtney Lux - After they meet, Trip and Nate go to a bar/café that I don’t ever mention the name of, but it’s based on a real place, V Bar. It’s really close to Washington Square Park, and I wrote the whole encounter sitting where Trip sits during the scene.

WF -    How did you come up with the title of your book or series?
CL - The book shares a name with what Trip calls his collection of stolen and lost items that he carries with him throughout the story.

WF -     Give us an insight into your main character. What does he/she do that is so special?

CL - Trip is tenacious. Life hasn’t been particularly kind to him, but he’s not one to go down without a fight, and despite everything, he always manages to get back up and keep going.
Nate is sturdy. He can be flustered or shocked in the moment, but even then he’s already formulating a plan to even things out, and he’s just very constant and calm overall. He’s always got plans, he’s always finding ways to smooth out the edges, and he uses that ability to help others be steady, too, which I think is just a beautiful quality.

CL - For me, the characters make or break things. I’ve always believed that people have stories, not the other way around, so having someone who is real, someone who has flaws and quirks and doesn’t always get it right and whose struggles you can really feel for, that for me is everything.

WF -     What does your family think of your writing?

CL - They’re baffled but also so supportive. I went to school for something entirely different, and I don’t think it ever really occurred to them that I would write as more than just a sort of silly hobby, so they were surprised when I told them I was doing my first novel. They’re more used to the idea now, though, and most of them are incredibly supportive and excited about it.

Courtney Lux is a Minnesotan-turned-New Yorker whose love for the city is rivaled only by her love for wide, open spaces. She is a graduate of University of Wisconsin-Madison and a soon-to-be graduate of New York University. When not playing writer, Courtney is an avid reader, constant dreamer, and lover of dogs, wine and being barefoot. Small Wonders is her first novel, and is the recipient of a Publishers Weekly starred review. 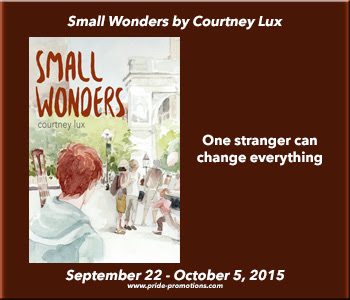 Rafflecopter Prize: $25 Interlude Press gift card for one winner and five others receive a copy of ‘Small Wonders’