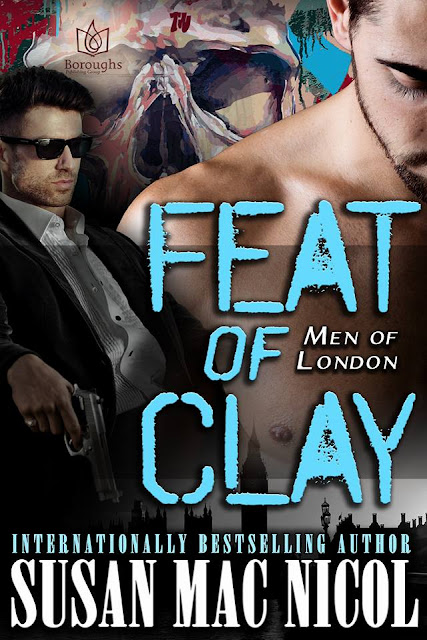 Imprisoned and tortured, undercover cop Tate Williams will find redemption in the arms of his boyhood friend, now lover, former SAS soldier Clay Mortimer.
TWO MEN.
TORN. TORTURED. LOVED.
Though they went their separate ways, Tate Williams and Clay Mortimer have been crazy about each other since their school days. Clay went into the SAS. Tate became a cop. Neither mentioned their attraction to the other. Both sought out danger. Both found it.
Imprisoned and shot in an undercover assignment gone wrong, Tate somehow survived…and found his way back into Clay’s arms. His old friend is now the owner of an elite investigation agency and everything any man could want: patient, handsome, commanding. And Clay knows what it takes to survive. But Tate can’t bring himself to share all his secrets, nightmares that force him to rebel against everything. He finds solace from his past as a graffiti artist, a childhood passion, but his demons drive away all who might care for him. Only when he faces that past—and learns that everyone has tasted despair—can the two men truly be brothers-in-arms…and more.


Galileo’s buzzed with activity as Clay walked back from the bar with a round of drinks. His friends were all seated in a corner booth, chatting animatedly. He grinned at Tate who already looked a little under the weather as he tried to convince Eddie of the benefits of briefs versus boxers. Eddie gave Clay a ‘please help me’ puppy dog look which Clay ignored. He knew exactly what happened when Tate got onto that subject, Clay being a boxer man himself, and he didn’t want to get involved. He smothered a laugh as he sat down and heard the words ‘dangling junk’ seeing Eddie’s panicked look around the restaurant to check if anyone else had heard Tate’s rather loud ode to the delights of wearing briefs to keep his junk “contained.”
Taylor waved his beer bottle in Clay’s direction. “More booze. Just what we needed.” He slugged down the remains of his current drink and picked up another one.
His fiancé, Draven, sighed. “Tay, remember what happened the last time you got drunk? You gave Tate hell, and then it ended up with Gideon politely kicking you and me out of the restaurant with poor Clay as the babysitter.”
Clay laughed loudly. “I remember that night well. I thought poor Gideon was going to pitch a fit.”
“Poor Gideon did pitch a fit,” was the dry rejoinder from behind and Clay turned to see the man in question standing there. He was immaculately clad as always in a grey suit, as befitted the owner of Galileo’s. He sat down in the empty chair beside Eddie and leaned over to kiss his cheek.
Gideon grinned. “If I recall, it was a bit like the Nicky Starr porn site in here that night.” He frowned. “Talking about Oliver and Leslie, weren’t they supposed to be here?”

He grinned as his pants were unzipped and Tate’s tongue came out to wet his very kissable lips. At that sight, Clay’s cock instantly plumped up. The sly caress of Tate’s thumb across the head of his dick made it even perkier. Clay settled comfortably back against the couch, stretching his arms across the back, hitching a breath as Tate’s mouth swallowed him down. The image of Tate’s mouth on him, dark head bobbing up and down with his little moans of pleasure teasing his cock, never failed to arouse Clay. Tate was exceptionally good at sucking cock and enjoyed it immensely. His hot, wet tongue flicking against Clay’s tip, those long, steady licks against his shaft as Tate glanced up at Clay, holding him mesmerised. The fact this was his Tate was a turn-on itself.

“Your mouth is too good at this,” Clay hissed, eyes closing in bliss as Tate took him deep, throat massaging his sensitive dick. “I know I say that every time.” His voice caught as Tate’s tongue did something to him that sent all the nerve endings in his body aflame. “Christ that felt good. Do it again.”

Tate’s gave a wicked chuckle as his dirty mouth drove Clay crazy. When he pulled off, Clay moaned pitifully. 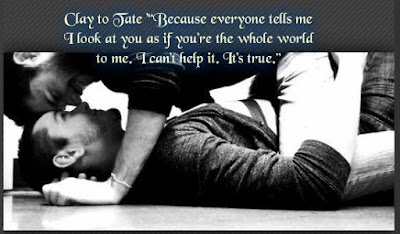 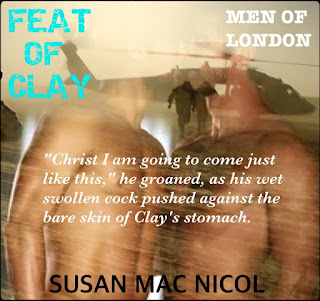 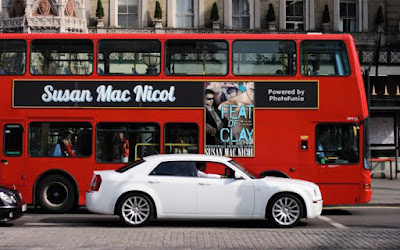 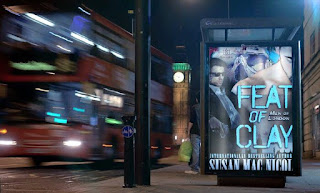 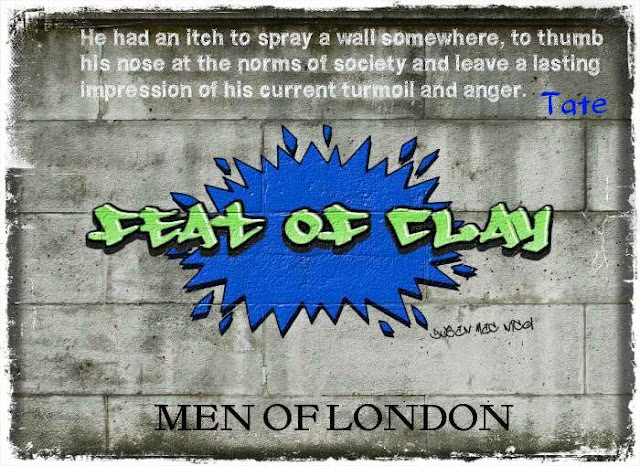 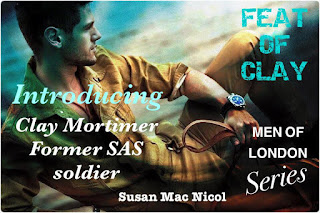 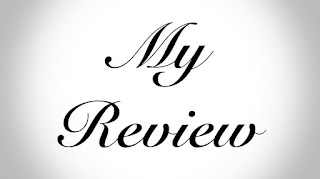 Feat of Clay is the 4th book in the Men of London series. This could be read as a standalone but for a deeper reading experience, I'd suggest reading the previous three books. Clay and Tate have known each other since childhood. It took Tate being captured and tortured for Clay to finally tell Tate how he felt about him. That's not to say things have been easy since that moment. Tate has had a lot to overcome from being held captive. Clay is very supportive of Tate but he tries to wrap Tate in a bubble so he won't get hurt again. Tate totally can't stand that bubble and let's Clay know quite a few times to back off. Feat of Clay is much darker and more deeply rooted in the relationship aspect of the story. While we don't see the start of Clay and Tate's relationship, bits and pieces are shown so we can see the progression. I actually like not seeing the start of their relationship because romance shouldn't just be focused on falling in love. Romance should be all aspects of being in love, and being a part of a relationship is work. Feat of Clay shows that falling in love is the easy part, it's keeping the relationship going forward that requires work and compromise so all involved are equally represented. For Tate that's a huge struggle in this story, he doesn't feel like an equal for a good portion of the story. That's not because of Clay or even Tate, but a large part of the recovery process Tate is still going through to heal himself completely. I loved that Tate was a bit unconventional even though he was a police officer he still was an old school tagger. His working with the kids to help them open up which also helped him heal. While Feat of Clay is not a light hearted romance, it's still one hell of a love story between two very strong, very stubborn men who love each other so hard and so much. I highly recommend this story, of course after reading the first three books. I can't wait for the next book in this series! 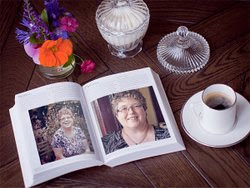 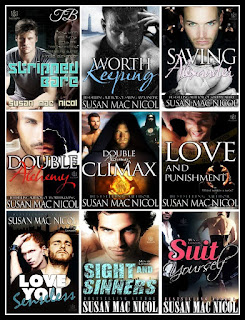 Susan Mac Nicol is a self confessed bookaholic, an avid watcher of videos of sexy pole dancing men, self confessed geek and nerd and in love with her Smartphone. This little treasure is called 'the boyfriend' by her long suffering husband, who says if it vibrated, there'd be no need for him. Susan hasn't had the heart to tell him there's an app for that...She is never happier than when sitting in the confines of her living room/study/on a cold station platform scribbling down words and making two men fall in love. She is a romantic at heart and believes that everything happens (for the most part) for a reason. She likes to think of herself as a 'half full' kinda gal, although sometimes that philosophy is sorely tested.Lover of walks in the forest, theatre productions, dabbling her toes in the cold North Sea and the vibrant city of London where you can experience all four seasons in a day , she is a hater of pantomime (so please don't tar and feather her), duplicitous people, bigotry and self righteous idiots. In an ideal world, Susan Mac Nicol would be Queen of England and banish all the bad people to the Never Never Lands of Wherever -Who Cares. As that's never going to happen, she contents herself with writing her HEA stories and pretending, that just for a little while, good things happen to good people.