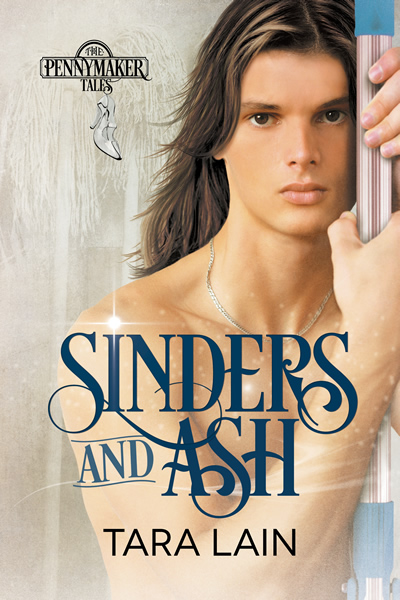 Sinders and Ash
(The Pennymaker Tales Series)
by Tara Lain

Blurb:
Housekeeper Mark Sintorella (Sinders) works diligently at a resort hotel while designing clothes anonymously, hoping to get into fashion school. Then his carefully planned life is upended with the arrival of Ashford Armitage, son of the fifth richest man in America—and the most beautiful guy Mark has ever seen. Ash must find a wife or he’ll lose his grandfather’s inheritance, and he settles on Bitsy Fanderel. But secretly Ash is gay, and the guy who cleans the fireplaces sets his heart ablaze.

Further stirring the pot is the little elf of a man, Carstairs Pennymaker, who has Mark wearing his own designs and masquerading as a girl to impress the fashion investors in the hotel. When the clock strikes twelve, two beautiful princesses line up for the wedding—but one isn’t a woman. Will the slipper fit? Only Mr. Pennymaker knows for sure.

Pennymaker turned and looked at Mark. “What are you working on?”

“Excuse me? I, uh, have to clean some fireplaces this morning. You know they keep the rooms cool just so they can use them? Makes work for me.”

“That’s not what I mean, of course.” Pennymaker turned back to the rack and pushed some jeans aside. “Aha!” His hand shot through the garments to the dress form. He made an opening in the clothes and stepped through to stand beside the red dress. “Perfect. Just beautiful. What a talent.”

Pennymaker beamed at him. “You have exceptional design skills.”

God, it was hard to not be flattered. “Thank you, sir.” But how had Mr. P known to look for the dress? Who’d told him?

Pennymaker walked over to the chair and sat. It creaked. Hopefully the tiny man wouldn’t strain the old wood too much. “I would like to show that dress to some people.”

No. He couldn’t get excited. “Really, sir? You’re in the clothing business?”

Okay, try not to be suspicious. “How did you know I was a clothing designer?”

The little man waved a hand. “That lovely T-shirt, of course.”

“Who would tell me?”

Pennymaker stepped back and surveyed the dress. “Now, who is your model?”

What? Mark cocked his head.

“Whom did you set the dress form to?”

“Perfect. Perfect. When do you have to be at work?”

This conversation was crazy. “In about an hour. This is my morning off. Unless they need me, of course.”

“We’re going for a little walk through the hotel. You’ll be my… niece. Go on, go on.” He made a shooing gesture with his hands.

Mark shook his head. “Sir, I know I fit the dress to me, but that’s because I don’t have anyone else. I’m not a transvestite.”

“Never said you were, dear boy. But these people I want to have see the dress will be much more amenable to taking your designs seriously if they think of the idea themselves rather than me telling them. That’s how we all are, now isn’t it? I want them to see the clothes. We don’t have another model, and we don’t want anyone else in on our secret.”

Secret? “What if someone recognizes me?”

Pennymaker cocked his head. “That’s very unlikely. You do a good job making yourself plain and unmemorable with your cap and glasses.”

Mark felt the blush. Shoot. The man had him dead to rights.

“Besides, people see what they expect, and they certainly don’t expect to see Mark Sintorella in a dress. Now, put it on.”

Mark stepped behind the rack of clothing. He stripped to his boxer briefs and stopped. What the hell was he doing? He could jeopardize his job for this crazyassed little guy with his hairbrained scheme.

The voice came from the other side of the clothes. “Do you have it on?”

“Sir, I don’t mean to be rude, but are you sure about this? I really need the money I get from working here.”

“Tut-tut, my boy. Hurry. I want to make one tour around the lobby and public rooms before you start your shift. Time’s a wastin’.”

Mark pulled the dress over his head and let it fall into place. The skirt was just full enough to swing when he walked, so no one would notice his cock under it. “Uh, I don’t have any boobs.”

He stepped out. Pennymaker looked at him studiously. “Gorgeous. You don’t have breasts, but then neither do some women to speak of. I’m more concerned about the hairy legs. Go shave, quickly.”

“This won’t be your only modeling assignment, I suspect, so think of it as a long-term investment. Consider that brilliant young model who used to walk the catwalks in both male and female shows. You’re at least her equal in beauty.”