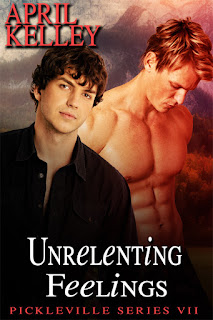 Blurb: Robyn Heath has made a pretty good life for himself away from Pickleville. He loves his job as a paramedic, has a best friend who he adores who also happens to be his partner at work, and he even gets laid every once in a while. Life couldn’t be better. Until the man who broke his heart comes back into town.

Caden Flynn has been gone for a long time. Five years fighting for his country has taken its toll and changed him in some fundamental ways. One thing he wants more than anything is to right the wrongs he’s caused Robyn. Robyn proves to have a very stubborn heart.

Caden stopped breathing the instant he saw Robyn again. His Robby was so fucking pretty, just like he always had been. He had filled out slightly and his hair was styled differently, longer on top and shorter all the way around. Caden wanted to run his fingers through all those loose curls on top.

"I fucked up so hard, man," he whispered to Brad, who still stood beside him. He watched as Jaron took Robyn's elbow. They exchanged some words and then Jaron let Robyn go. Robyn went inside and it took everything in Caden not to follow, to make Robyn listen to him as he explained himself, even though there wasn't a damn thing he could say without sounding like an asshole.

"He used to love you," Brad pointed out.

"Well, he acts like he doesn't even care now."

"He cares. He's trying not to though." Brad looked at him, holding his gaze. "He slept in your room every time I would let him. I heard him cry on your pillow, Caden. When you stopped calling him, he would beg me to make you call him. Even after he moved with Neil and Owen, he still begged to talk to you. He would even call me specifically to ask after you until a couple years ago."

"Why didn't you tell me this before now?"

"My point is that you never asked about him. Not once."

"You're saying I didn't care as much as he did."

"I don't know if you did or not. The undeniable fact is that man loved you with everything he had."

"I don't know if you should even try. My gut tells me you should let him go," Brad said.

"I give up. I'm not talking to you anymore. You sound like Yoda and it's driving me crazy. I need advice on Robyn not on how to use the force." Caden started to fold his arms, but then winced at the pain it caused. He remembered the crushing force of the truck as it rolled over him, pinning his arm down. The worst part was turning his head to find Yarborough's lifeless eyes next to him, the lower half of his body was gone. The vehicle had shifted, moved off its side and when it did Caden's arm was freed. Not before crushing the bones and leaving a scar that ran from his bicep to just before his wrist.

Caden felt a hand on his back and turned to see Luis. "Thank god. I need advice and Brad is being cryptic."

Luis shrugged. "You probably just need to pay attention to what he said." Luis pounded him on the back. "Have fun. This is supposed to be a party. Now, where is Owen?"

1. Okay, I know this is going to be so cliche but I really want to get a print copy of just one of my books. I want to hold and love it and squeeze it. It will be my precious. Who doesn’t want to hold tangible evidence of their accomplishment?

2. I would say number 2 should be going to a conference as an author, but I managed to secure that golden ticket to GRL so I’ll be heading off to San Diego in October, where I’ll be meeting a lot of you. So this one would have to be meeting some of my writer and reader friends. I’ve made quite a few in the few short months I’ve been a published author. Some I would even count as my best friends now. It really has been a great experience. Nicest people in the world.

3. Going to EuroPride. I really would love to meet some of the readers who are from Europe and Europride would be a great place to do that.

4. Meeting all of my favorite Authors. There are way too many to count actually. I fangirl just thinking about meeting them. Andrew Grey, Carol Lynne, Amber Kell, etc.

5. Finally meeting my reading buddies face to face. I have belonged to a reading group for over ten years now. It would be amazing if we could all get together someday. Smug Sluts UNITE!

6. I want to go to Australia. This might not seem like a literary goal but Bronwyn Heeley and Lily Lamb are in Australia. They are two of my favorite people and amazing writers.

7. Thirty years from now I want to still be doing this. I love writing, more that I love to do anything else. If I can keep doing this for the rest of my life then I really want to. Thirty years seems like a long time right now, but it really isn’t when you get to the other end of that time period.

8. I want to go to Camden, New Jersey. Walt Whitman is buried there and he’s a favorite author of mine. I also want to visit Zora Neale Hurston’s grave. I’m just not sure where it is at the moment, but I’m sure a google search will educate me. I know Alice Walker went searching for it a few years ago and found it. If Alice can find than so can I.

9. I’d like to go on a writer’s retreat someday. They sound relaxing and being around other authors would be really cool. Although, we probably wouldn’t talk to each other much, just sit around and write in the same general space. Hopefully, I’ll get to go to one in November with a friend of mine and I can mark this one off the list.

10. I’d like to RV around the United States. Write and be nomadic.

There you have it. Top 10 bucket list. I think most of these I’ll be able to accomplish too.

Living in Southwest Michigan, April resides with her husband and two kids.  She has been an avid reader for several years.  Writing her first story at the age of ten, the characters in her head still won't stop telling their stories.  If April isn't reading or writing she can be found outside playing with the animals or taking a long walk in the woods.