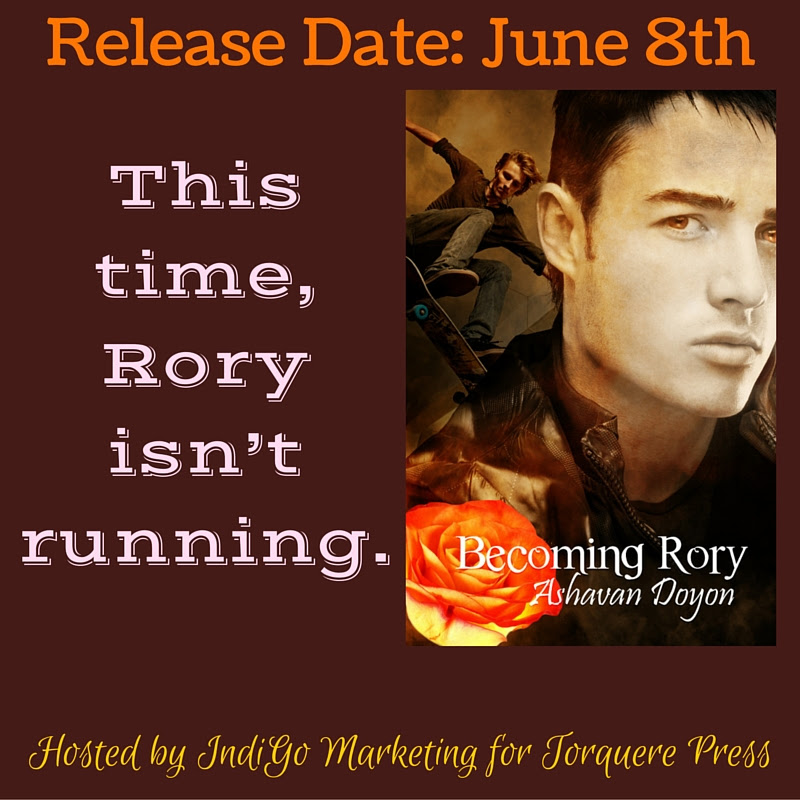 Rory Graeble returns to college determined to reinvent himself. Too many years have been wasted with masks, but becoming a student leader is a step Rory isn’t sure he’s ready for. A new identity takes more than just a new nickname, and Rory knows he has to take the chances that his old self would never risk. When that chance is a party that ends with an anonymous hot skater’s tongue down his throat and a phone number in his pocket, Rory knows what he has to do.

Danny Smits never expected to see stuffy lit geek Rory Graeble trying to be out, trying to be proud, trying to be… Rory. It’s damned sexy, and too much for the entrepreneurial skater to resist. When Rory calls him back the day after the party, Danny knows Rory has changed. But will Danny’s haunted past deter Rory? Or will Rory embrace the chance to experience everything the closet had stolen away? Danny believes in keeping things real, in a brutal honesty he knows means Rory will run screaming.

But this time Rory isn’t running.

It was quiet. Rory knew that wasn’t normal. He gazed out the windows. The angle of the building meant that one side was faced toward the campus, a miniature city full of towering buildings scattered in clumps, the other faced the mountains and woods. Two contrary images. It appealed to his poetic soul. That was a part of Lawrence he had no intention of letting go. It spoke to his core, that love of words.

Rory opened a window against the heat. Wentworth was an older building, and Rory half expected in winter that he’d have to keep the window open just to breathe. For now though, with no air-conditioning and a fan that did nothing except when pointed at bare skin, an open window was a welcome reprieve from the late August heat. There wasn’t enough of what he wanted Rory to be, not yet, for him to be comfortable with naked skin—at least not his naked skin.

His dorm room was taking shape. The books were on the bookshelf, two deep. An index card on the end of each shelf cataloged the books on the back row. They were books he wouldn’t want often, but when he wanted them, they’d be easy enough to find. Each shelf had a theme. On each shelf his favorites were in alpha order in front, and those he’d brought only out of fear his dad wouldn’t… Rory closed his eyes and took a long breath. There were reasons for his rebirth as Rory, and not all of them were here at school.

The boxes for the books were broken down and in the back of the closet. His clothes were hung up or carefully folded and in drawers. They spoke of Lawrence, not Rory, but they were what he had. It would be easy to fall back into wearing these. He’d have to for a little while. Clothes cost money, and for the first time in his life, Rory was not confident a call home would yield any more, not even for clothes. Especially not for clothes. What’s wrong with the clothes you’ve got? It’s what his dad would say. Probably his mom too.

With three beanbag chairs, the chair for his desk and the bed, that meant seating for five, at least. Anything over ten was considered a party. Not that he had any real hope of filling even the five spaces he had. Rory chuckled at himself. He could hope, but it wouldn’t happen. Still, he might get Stacy and Barry to join him. He walked up against the window, pinned between the steady whir of the fan and the tiny breeze from the window. It was comfortable. Well, not yet. Not really. But it would get more so over the course of the semester. He had to believe that.

On the desk next to his laptop, too hard to ignore from where he stood at the window, was his student leadership packet. The college had found some money somewhere. The portfolio wasn’t the cheap paper folder he’d expected. The mock-leather portfolio marked with the school seal—embossed on the cover, not just ink—had come with a lapel pin and a school pen. Okay, so the pads of paper inside were cheap, but that the school had done that for all the student leaders who arrived early? The communications major in him couldn’t help but analyze it for the message, and it wasn’t hard for him to guess. Take this seriously; they want us to take it seriously.

Rory wondered if they knew that the fledgling leaders were coming back in an hour as the sun finished its descent with the makings of a party. He wondered if Barry knew. Bronzed. Fit. Popular. Of course Barry knew. Rory glanced at the door he’d left open. He tried to pretend it was for something as mundane as airflow, but in his heart where the dull ache of the afternoon’s discussion still sat like a leaden brick, he knew better.

“This is where you do something stupid, Lawrence,” he whispered to himself. He knew what he wanted to do. Want is a strong term. Maybe it’s just the only way you know how to deal with it. And your name is Rory, dipshit. Lawrence is dead.

He looked again at the pile of leadership materials. How had Aidan talked him into this again? Oh, right. There was no one else. Aidan and Michael, they were gone. John Simmons was gone. All they had was a scattered and broken community.

Rory looked out at the slowly illuminating lights in the buildings across campus. It wasn’t like it would be when classes started. Right now it was just dots of light here and there. Athletes. Student government. Student organization leaders. It was getting dark. The party would start soon. As a leader, he’d been invited, quietly, with everyone else. Would the athletes be there to make him feel inadequate? Rory let out a breath, slow. Lawrence would never have gone. Maybe that meant Rory needed to.

He sat down at the desk and quickly flipped through the packet. Even on a cursory glance it was clear that the real requirement was to be present for the workshops throughout the week. The administration had scrupulously left the evenings to the students. It was a kindness, he noted, they had not extended to the residence life staff. He’d seen Becky and Barry earlier, making door tags for each of the residents. It would take them hours to do, and he’d wondered at the time why they’d started so early. But if Barry knew about the party… Rory sighed. Why did it matter if Barry was there? He wasn’t interested.

Rory closed the portfolio and pushed it away. His thoughts turned to how he could almost see skin under that too thin shirt of Barry’s. Also pretty uncomfortable.

He stood up and walked over to his closet. They were nice clothes, but they all fit into a particular mode. He pushed the hangers aside one by one. White shirt. Blue shirt. Pastel shirt. All of them button fronts. Then cardigans. One after another. Trousers and corduroys. Tweed jackets. Two business suits his parents had bought him for interviews. At least one of them was sleeker and more modern.

“They’re all Lawrence. All of them,” he muttered. He rested his forehead in one hand, massaging his scalp with his fingers to try to stall the oncoming headache. His eyes opened wide. “Maybe…”

He went back to the desk, trying to stay calm, and pulled out his laptop. Two quick searches and he’d found it: what good-looking fashion models could do with a cardigan. It wasn’t Lawrence at all. That was good. But could Rory pull it off? He was no top model.

He looked back at his closet. “Better than locking myself into being Lawrence again all year.” He combed his fingers back through his hair and closed his eyes again. “I can do this. I can choose to be Rory.” 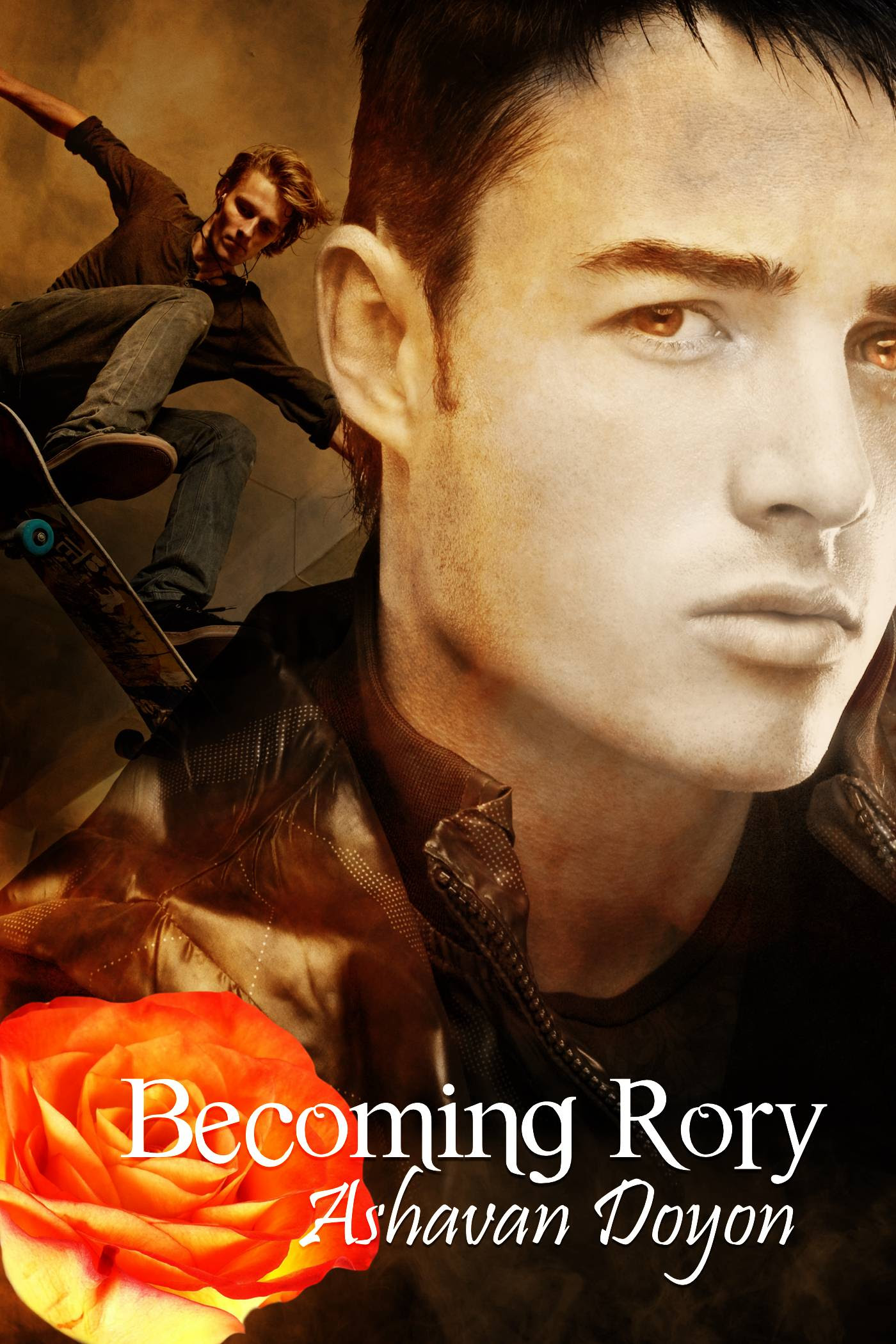 Ashavan Doyon spends his days working with students as part of the student affairs staff at a liberal arts college. During lunch, evenings, and when he can escape the grasp of his husband on weekends, he writes, pounding out words day after day in hopes that his ancient typewriter-trained fingers won’t break the glass on his tablet computer. Ashavan is an avid science fiction and fantasy fan and prefers to write while listening to music that fits the mood of his current story. He has no children, having opted instead for the companionship of two beautiful and thoroughly spoiled pugs. A Texan by birth, he currently lives in New England, and frequently complains of the weather.

Ashavan went to school at the University of Massachusetts at Amherst, getting his degree in Russian and East European Studies, with a focus in language and literature. He has two incomplete manuscripts from college that he goes back compulsively to fiddle with every so often, but is still not happy with either of them. He still loves fantasy and science fiction and reads constantly in the moments between writing stories.

Ashavan loves to hear from readers and can be reached at ashavandoyon@gmail.com.

Rafflecopter Prize: One winner will be selected to win an eBook copy of Becoming Rory