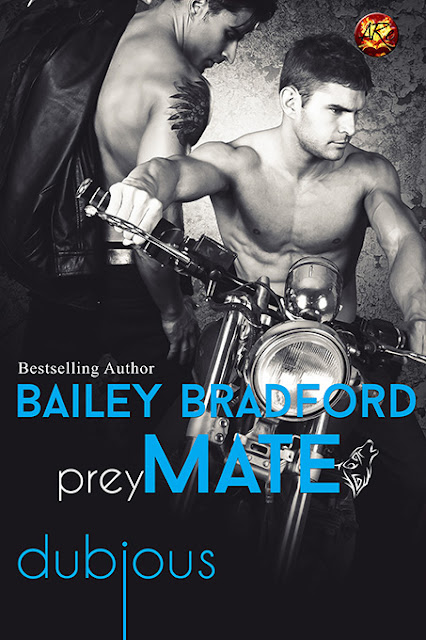 Cody Sanderson wasn't looking for a life on the run, but one mistake has cost him his freedom. If he gets caught, it might cost him his life. The man he hooked up with for a night wasn't a man after all, but a beast intent on owning Cody.

But Cody isn't anyone's to keep. He will evade capture and die before he lets himself be caged by a monster. When he's finally caught, he thinks he's about to be taken to the one man he doesn't want to see ever again. Instead, he's offered protection and a solution that will keep him safe.

The only thing is, he'd have to be mated to one of the very things he feared most—a wolf shifter. Cody's not so sure the risk is worth taking.

It was happening again. Cody Sanderson fought against the instinct to turn and look behind him. The uncomfortable sensation of being watched made his spine itch. He finished the last of his beer and set the bottle on the grungy table. The bar he’d stopped in at was a few steps below a dive, not the kind of place he’d hung out at in Texas at all. He’d hoped that would throw Ansel off his trail. Maybe it had, and whoever watched Cody had nothing to do with Ansel at all.

Or maybe Ansel had found him. Again.

Cody wiped his mouth and pushed to his feet. The legs of the chair scraped noisily on the uneven floor, timed, much to his displeasure, with a pause in the country music that had been blaring from an ancient-looking jukebox a half dozen feet away. Cody hadn’t been listening to the song—it’d been a background noise to his own chaotic thoughts—and he didn’t know if the song had ended naturally or if someone had stopped the music. Perhaps he was being paranoid, but paranoia was all that had kept him alive thus far.

He kept his head down as he pushed the chair back in, a ridiculous thing to do in a bar like this one. Old habits and ingrained manners made him do it, though, and he felt like it marked him as the outsider he was. It was definitely past time for him to get out of there.

The jukebox didn’t start up again as he made his way toward the exit. Cody’s skin prickled with goosebumps as he walked. The utter lack of conversations made him want to run screaming from the place. He felt like everyone watched him, and if they were, it couldn’t mean anything good for him at all.

He tried to think, to pinpoint if he’d done anything that might have made him a target there. Nothing came to mind. He hadn’t done more than order a beer and a burger, had been careful not to smile or stare anyone in the eyes for longer than necessary. Keeping his gaze averted would have marked him as prey as surely as staring too long would have.

What a crazy, unbelievable world to live in. And he’d had no idea just how crazy and unbelievable until he’d stumbled upon Ansel’s secret. For that bit of stupidity, he’d have to spend the rest of his life on the run, on the lookout.

If he survived tonight. His footsteps seemed abnormally loud as he strode toward the door. The scents of stale beer and cigarette smoke paled against the rancid sweat odor that clung to him. If Cody could smell his own fear, then so could any predators.

He struggled to keep from running, to keep his steps even. Showing fear would be a mistake he might not survive. His palms were slick as he reached for the door handle, but he didn’t lose his grip on it. Cody opened the door, and the crisp, cold air that greeted him chilled him to the bone.

He stepped outside. The sound of the door closing behind him didn’t ease his fears any. Every one of his senses was on alert; Cody had learned to listen to his instincts in the past few months. He held himself still, barely daring to breathe as he waited. When music blared suddenly from inside the bar, Cody bit back a yelp but couldn’t repress his body’s reaction otherwise. He jolted as if he’d been jabbed with a cattle prod, and it broke his reserve, sending him running to his motorcycle.

Cody told himself that over and over again, but he knew he’d never be safe, and he’d only be able to stop running when he was captured by Ansel or dead. Given those two choices, he knew which one he’d prefer.

Prey Mate is a contemporary paranormal novella in the Dubious series.

This story starts out with action and that continues on straight through the end of the story. Cody is trying to hide from Ansel, an insane werewolf who wants to take possession of him. Before they met and hooked up one night Cody didn't even know such creatures really existed and now he's running for his life. Little does he know that he's about to encounter another werewolf determined to find him a mate to 'save' him from Ansel.

Derrick is a Hunter, which is more of a protector of his kind. His family's always been a watch dog of sorts for their kind, making sure no one oversteps and brings their species into the public eye. Stopping the insane from destroying others of their kind, and so on. He leads Ansel to believe that he is working for him but in reality he's working to save Cody from Ansel. He just goes about it the wrong way for Cody since ultimatums and no options generally piss Cody off. It doesn't help that Cody and Derrick are also attracted to each other, even if it's reluctantly.

This is a novella and as such it packs a lot of story into a short package. While it gives a satisfying story there were a few things I'd love to have had more backstory on, particularly the Dire Wolves and Derrick's role as Hunter/Protector. It doesn't really detract from the story it just didn't give me that deeper story I prefer. The sexual tension and finally sexy times between Cody and Derrick are smoking hot. The action is spot on, the bad guy is pure evil, and the conflict is well written.

All in all this was good story that you definitely need to pick up for a quick, sexy read!

The Appeal of Mating/Marriage of Convenience by Bailey Bradford

When I was asked to be a part of this exciting series by All Romance eBooks, I was a bit stumped at first. And totally enthralled, because this is a trope we’ve seen and read so often in romance. Figuring out how to make a mating or a marriage of convenience necessary for two guys (or more) sounded like the kind of challenge I love.

The appeal, for me, is having characters that might not otherwise give each other a chance, being thrust into a situation where they have to make some hard choices. It’s angst, and anger, it’s fighting against desire sometimes, just for the sake of being stubborn. It’s fear tempered with hope, and maybe desperation.

But there’s also respect, boundaries, and usually—one of my favorite things!—secret, buried affection which leads to love and a happy ever after.

Bailey Bradford is a married mom of four who spends most of the day writing, either on stories or at the blog. She loves to write as much as she loves to read. Baily is generally quiet and laid back, choosing to let things slide off rather than stick and irritate her. Although like many authors, she finds it a challenge to talk about herself, but she does answer emails and invites readers to leave comments on her blog if there’s something specific they’d like to know.

For more information about other books by Bailey, visit her website: www.baileybradford.com.