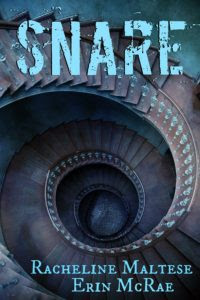 When Matthew pulls open the door, a blast of wind and snow swirls in. The snow is piled up on the stoop, and as they watch some of it crumbles onto the carpet of the foyer. The street is drifted with white and all Eli can see is billowing white globes of snow around each of the streetlamps.

“Okay, there’s no way you’re leaving,” Matthew declares, pushing the door shut again and cutting off the frigid stream of air. Eli’s glasses fog up again, but only briefly, and once they’re clear he sees Matthew turn to regard him thoughtfully. “Even if the subway’s still open it’s going to take you forever to get home. Do you want to stay for dinner?”

As he asks, he leans forward and puts his hand over Eli’s where he’s gripping the strap of his bag.

All at once, Eli realizes that he is in a house with Dead people and vampires; that if the trains are down he has effectively no way to get home; and that he’s being propositioned.

“Oh my god,” he says. This is entirely the thing his mom had fretted about, at length, when he announced his intention to move to New York. Because con-artists, homosexuals, anarchists, and vampires. It’s her worst nightmare. Maybe there are drug dealers here too. 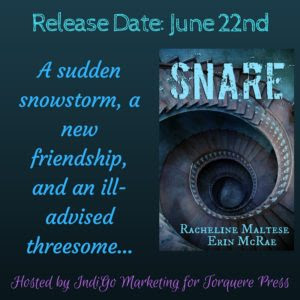 Erin McRae and Racheline Maltese write the LGBTQ Hollywood romance series Love in Los Angeles (Torquere Press) and the theater-based Love’s Labours series (Dreamspinner Press). Their work has also been published with Cleis Press and Supposed Crimes. Erin is a writer and blogger based in Washington, D.C. She has a bachelor’s degree in International Relations from the University of Toronto, and a master’s degree in International Affairs from American University where she studied the role of social media in the Arab Spring. Racheline’s fiction, non-fiction and poetry has appeared in numerous outlets. She is also a producer and writer on Serial Box Publishing’s Tremontaine (available in print from Simon & Schuster’s Saga Press). Together, they write stories and scripts about the intersection of private lives, fame, and desire.

Rafflecopter Prize: One winner will be selected to win an eBook copy of Snare
a Rafflecopter giveaway