Come What May by A.M. Arthur - Blog Tour with Character Take Over and Giveaway 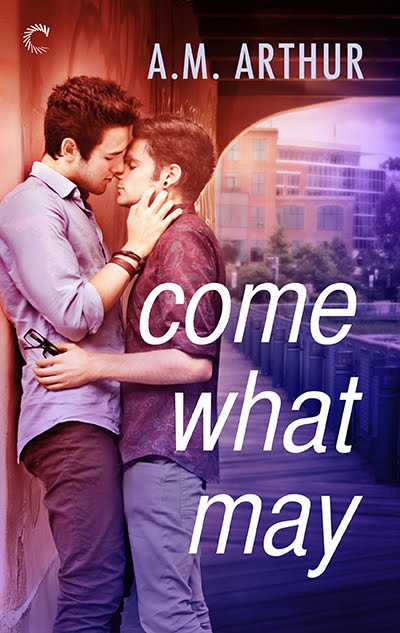 Book Name: Come What May
Series: All Saints
Book: One

Jonas needs Tate. He just doesn’t know it yet.

Or at least, he doesn't want to admit it. Because there is no way Jonas Ashcroft is gay. He’s a straight, carefree frat boy player, just like any good son of a conservative state senator. If only his struggle to convince everyone—especially himself—didn’t leave him so miserable. No matter how many girls or bottles he drowns himself in, Jonas can neither escape nor accept who he is.

Enter Tate. He’s smart, confident, and instantly sees right through Jonas’s surly exterior. Sure, he’s done things in life he’s not proud of, but he knows who he is and what he wants. And what he wants is Jonas. As their easy friendship intensifies into something more, Tate introduces Jonas to a life he’s never known. One filled with acceptance and sex and a love that terrifies and excites them both.

But some inner demons refuse to be shaken off so easily. When Jonas’s old life barges in, he faces a shattering choice, one that could destroy everything he and Tate have fought so hard for. Sometimes love just isn’t enough—and sometimes it’s exactly what you need.

“It’s small,” Jonas said.
“Better than a cardboard box or foster care.” The sharpness in Tate’s voice echoed in his frown.
Jonas had never known anyone before who’d been in foster care, and saying so would probably make him the biggest douche on the planet. It also took the edge off some of his irritation over the total mindfuck that was Tate Dawson. “It’s way better than both of those things. You worked hard for this place, Tate. I haven’t worked hard for anything in my life.”
“I disagree.”
He blinked. “You do?”
“Yes, I do. I think you work very, very hard to convince yourself and the world that you’re something you’re not. I think you work very, very hard to be perfect when no one is, and the only thing anyone should ever do is just be her or himself. Be true to you, not to what others want from you.”
Jonas’s throat squeezed tight. “I can’t.”
Tate took a step closer, bringing a gentle waft of sweat and something sweet. “Why not?”
He saw the barest reflection of himself in Tate’s glasses and he didn’t like it. He stepped back. Tate snagged his wrist and held him there. The touch sent awareness buzzing across his skin, down his spine and straight to his balls. H needed to pull away before this got out of control.
And then his rebel brain decided it was a good idea to glance at Tate’s pink lips. Lips that Tate, the asshole, licked with slow swipes of his tongue.
Jonas yanked away his hand away so hard Tate stumbled. “I’m not gay, so you can get that ‘fuck the frat boy’ fantasy out of your head right now.”
Instead of being cowed, Tate planted both hands on his hips and said, “Who are you trying to convince? Because it’s just you and me in this room, and I’m not the one who brought up your sexuality. You did.”
Damn him. “Why won’t you leave me alone?”
Tate’s gaze drifted over his face as he sought for words. “Because every time we’re together I can tell you’re struggling with something. You put up this lone wolf front to keep people at arm’s length so you don’t have to work so hard to pretend, but it’s exhausting you. Jonas, you can be yourself with me. Whoever that is.”
“I can’t.” Talking was getting harder around the lump in his throat. His heart was kicking too fast and his chest ached.
“Look me in the eye.” Tate closed the three strides between them, then curled a warm hand around the back of Jonas’s neck. “Look me in the eye and say you don’t want to kiss me right now.”

Jonas and Tate's Lists of Things They'd Never Do Again

1. Get drunk and dare someone to stick raw ginger up their butt (don’t ask).
2. Lie about who I am.
3. Underestimate the importance of lots of lube (again, don’t ask).
3. Eat raw oysters (you really don’t want to know).
4. Take anyone or anything in my life for granted.
5. Skinny dipping in winter (I didn’t know my balls could shrink that small).

1. Have sex on a concrete floor without something to pad my knees, because ouch.
2. Let my little sister Marnie be taken away from me and put back into foster care.
3. Drink cherry-flavored hard cider, because that shit tastes like cough drops and bile.
4. Not pay attention to my surroundings at all times, especially when alone in an alley.
5. Naked Twister.

4.5 out of 5 stars
Come What May is the first book in A.M. Arthur's newest series, All Saints. Now there are characters who show up from her Belonging series, and the Restoration series. The other series do not need to be read for you to enjoy Come What May. However I absolutely loved both of those series and recommend reading them for a deeper experience.

I'm going to start off with this is going to be one of those books that readers are going to have strong opinions over mostly because of Jonas. As I first started to read the book, I instantly disliked him, almost hated him. He's got a very callous way of speaking about people and things that have happened. He grew up privileged and it shows in his every movement, and every half-assed comment to those around him. As I was reading further through the book Jonas's actions took on a pattern, anytime he wanted to look like the 'big man on campus' or better than his current situation is when he pulled out the asshole side of himself. Otherwise he hid on his aunt and uncle's porch or in his basement room with his headphones. He wasn't ever mean or destructive but he could slam up walls faster then most people could take a breath.

Tate is who kept me reading, well that and an absolute love that I have for this author's stories. Here's this 20-something guy who's seen all sorts of hell imaginable and has given a good part of his life to raising his teen-aged sisters, runs a homeless LGBT youth center, and tries to see the best in everyone. Then he meets Jonas, and well he's seriously attracted to him even when Jonas is being an ass to him. He keeps trying with Jonas and doesn't give up on even trying to be friends with him and then things finally click with them. His persistence pushes Jonas into being able to accept himself.

This is a story you'll want to stick with, even when you want to strangle Jonas, because his transformation is a huge part of what makes this story well worth the read. He goes from this self centered jerk to a person who wants to help others, and from a person who craves his conservative father's acceptance into a young man who sees himself as worthy. Come What May is definitely a story that you need to pick up, take it on vacation with you, or curl up on your couch and devour it. You too will fall in love with Tate and finally with Jonas.

Come What May has all the hallmarks of an A.M. Arthur story and is a perfect start to this new series. I eagerly await the next book in this series, okay.. I can't lie.. I eagerly await any new book that comes from this author's skills.

A.M. Arthur was born and raised in the same kind of small town that she likes to write about, a stone's throw from both beach resorts and generational farmland.  She's been creating stories in her head since she was a child and scribbling them down nearly as long, in a losing battle to make the fictional voices stop.  She credits an early fascination with male friendships (bromance hadn't been coined yet back then) with her later discovery of and subsequent love affair with m/m romance stories. A.M. Arthur's work is available from Samhain Publishing, Carina Press, Dreamspinner Press, and SMP Swerve.

When not exorcising the voices in her head, she toils away in a retail job that tests her patience and gives her lots of story fodder.  She can also be found in her kitchen, pretending she's an amateur chef and trying to not poison herself or others with her cuisine experiments. 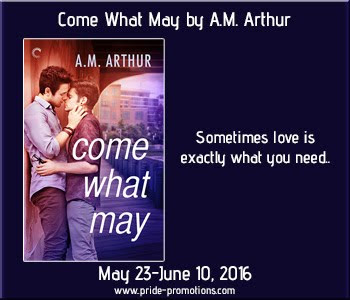 27-May: Hearts on Fire, 3 Chicks After Dark, Multitasking Mommas

30-May: Happily Ever Chapter, Books A to Z, Joyfully Jay

1-Jun: My Fiction Nook, Boys on the Brink Reviews, Making It Happen