Having Hope by Tabatha Vargo - Release Day Blitz with Giveaway

ENTER TO WIN $25 AT THE END OF THIS POST 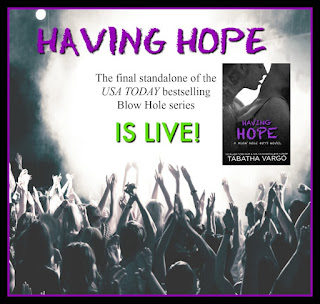 No one’s promised tomorrow. And Chet Rhodes, the drummer of Blow Hole, is all about living for today. Sex, drugs, and rock ‘n’ roll ... anything to help him forget his deadly secret and keep him detached. But when he meets Hope, a bitchy brunette with sarcastic wit and a deadly right hook, his carefully constructed defenses break down. For the first time ever, he wants more than a one-night stand.
Hope Iverson holds a secret that could potentially destroy everything she's built. Hardened with a short fuse, her past has left her emotionally unavailable. That is until the charismatic drummer for Blow Hole bursts into her life. His smart mouth has the ability to make her smile, and his inked body makes her feel things she’d rather not. But scars leave you changed, and Hope isn’t sure there’s enough of herself left to give.

“Are you ready to get your ass kicked?” she asked over her shoulder with a grin.
She pulled her shirt over her head, revealing a black tank, and I had to swallow past the desire that rushed through me. She looked so fucking hot in only her boots, jeans, and a tiny tank. She obviously wasn’t wearing a bra, but with tits like hers, she didn’t have to.
My mind went back to the moment she was on stage in only her black sports bra. She was soaked. She was sexy. And for the first time in a couple of days, my cock grew hard.
“Let’s see what you got.”
I stood to the side as she sat behind my set. I didn’t usually let anyone play my drums, but I trusted Hope with my babies. I’d watched her play. I knew she knew what she was doing, and I also knew she respected her own set and would do the same with mine.
She spun the sticks between her fingers, her glassy eyes all over me as she lifted a brow in challenge.
And then she brought the sticks down and beat out a fresh rhythm I’d never heard before. It was fast paced and strong, the percussion shaking the stage as she went crazy hitting any and every spot on my set yet still somehow making it sound amazing.
Her head fell back, and she closed her eyes as she continued to play, beating the drums unmercifully and turning me on beyond belief. Her arms moved, the small feminine muscles popping out with her movements, making the tattoos on her arms come to life.
I couldn’t do this with Hope. I couldn’t let myself get into her. She was turning me on more than any woman had in years. Not since my Blackbird five years earlier.
Women were a dime a dozen in my job. Hell, they were waiting just outside the venue ready and willing to let me fuck them senseless, but I was moving past that bullshit. After everything I’d been through since we started the tour, I needed relief. But I didn’t want it from just anyone.
The more I watched Hope play my drums, her arms flying and her eyes closed in ecstasy—the realization came crashing over me.
I wanted Hope.
I wanted Hope the way I’d wanted Blackbird for the last five years.
Watching her only intensified my craving for her.
I wasn’t sure I could control myself. I was feeling better, my painkiller finally doing its job, and my head wasn’t being ripped apart. I could think about more than the pain for once. I could think about Hope and how amazing she’d feel wrapped around me.
Wet.
Hot.
Ready.

Moving from my spot, I moved toward her. Her rhythm moved through me, vibrating my core and making me feel even more alive. I didn’t stop until I was standing right beside her. She kept her eyes closed; playing with so much beauty it was breathtaking.
I reached out and took a strand of her hair between my fingers, and the colors blended together when I rubbed my fingers together. Her playing came to an instant halt, and I smirked down at her when her eyes popped open, and one of her sticks fell to the ground at my feet.
Sweat dotted the top of her lip, and her cheeks were flushed with pleasure. Her expression was one of happiness and release, and I knew playing did that for her. It did the same for me, but I wanted to give her that look. I wanted to do it with my hands and my mouth … my cock.
I moved closer, taking her cheeks in my palms and spending a minute looking at her. I didn’t want it to be like the last time I felt this way. Unlike with my Blackbird, I took the time to remember everything about Hope.
I wanted to look at her face. I wanted to look into her eyes and see her when she came apart. It was going to be amazing. She was going to be amazing. We were going to be a match sexually. But before anything could go down between us, we would have to talk about it. I wanted to make sure she understood it would be a one-time thing.
Before I moved in, I wanted to be sure that this wouldn’t affect the tour.
“What are you doing?” she asked.
I didn’t miss the catch in her voice.
“I don’t know.”
And I didn’t. I didn’t know where this was going or what I was doing. My body was taking control of the situation, and I was letting it happen.
I wasn’t much for kissing. I’d probably kissed a handful of women in my time, but Hope’s pouty lips called to me. She was begging me to kiss her without even opening her mouth.
I leaned down, ready to taste her, but she placed her palm against my chest and stopped me.
“Wait,” she whispered.
I shook my head. “No, I suck at waiting.”
So I kissed her.
Hard.
She tasted like the night—liquor and sweetness with a touch of sin. It was wrong to taste her, but I’d never been one to follow the rules. All the boundaries I’d set forth in regards to Hope were being crossed, but when she began to kiss me back, her tongue moving against mine, I didn’t give a fuck about any limitations.
Her mouth opened, and I sucked her tongue into my mouth. Her moan vibrated through me and shot straight to my groin.
I felt her pull back, so I pressed for more, capturing her head in my hands and kissing her so deeply that I was losing myself.
My head wasn’t pounding anymore, but my heart was. It was beating so hard I could hear it in my ears. My blood moved through my body like a freight train, the horns whistling loudly in my ears. I hadn’t felt this kind of excitement for a woman in years. Not since my Blackbird.
I couldn’t stop.
I wanted more.

THE ENTIRE BLOW HOLE SERIES IS ON SALE FOR ONLY $0.99 UNTIL JUNE 30TH! 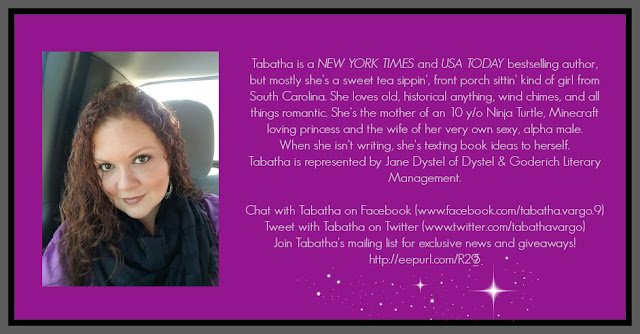