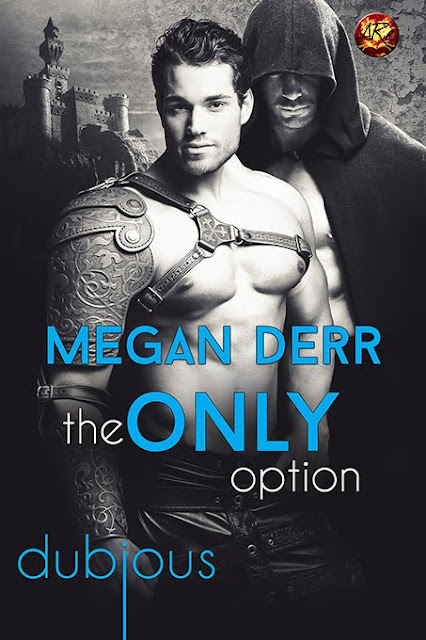 A desperate dragon. A lonely necromancer. A marriage neither wants.

When he is summoned to the royal castle, Rochus anticipates nothing more than a particularly difficult assignment. The bothersome journey is almost made worthwhile when he is propositioned by a young, beautiful dragon, Tilo, who seems untroubled by the fact that Rochus is a necromancer.

When Rochus arrives at the castle he is ordered to marry the very same dragon he spent the night with. Though Rochus would rather sign papers and return home, he is helpless against Tilo's pleas for help, even if it means spending more time around a man he is desperately drawn to but who doesn’t seem to want him.

Rochus pulled off his spectacles and wiped them clean as the door of the tavern slammed shut behind him. Noise washed over him, along with the smell of cheap food and too many unwashed people, an undercurrent of smoke, and the faint tingle of magic. He stared through the large, open archway into the dining hall, the need for food warring with a need for solitude and a reluctance to endure the stares that would come when everyone realized what he was.

But he detested hiding in his room like he was something to be ashamed of, and hiding wouldn't stop the rumors or whispers. So he slipped his spectacles back on and approached the counter, pushing back the hood of his cloak. He set two worn, gleaming coins on the counter, ignoring the wide eyes and gaping mouth of the man behind it. "A room, a bath, supper, and breakfast."

"Supper and—" The man snapped his mouth shut. "Of course, magus. Um…" He picked up the coins, eyes flitting about nervously. So close to the royal castle, one would think they'd be more used to the likes of Rochus, but then again, most of his kind preferred to avoid undue attention, and the rest were spoiled brats who'd never settle at a cheap tavern when the royal castle was only a few more hours away.

Stifling a sigh, Rochus answered the question the man couldn't quite get out. "Pig or cow blood will work fine, and chicken or some other fowl if that's the best you can muster. A full pitcher of it, though merely a cup will suffice if more cannot be found. Not horse." They were far too expensive to drain, and the taste wasn't worth it.

"Y-yes, magus. Um." The man licked his lips. "Will you want to see the room first or go straight to the dining hall?"

"The room, and I'll take the bath after I've dined."

The man murmured another affirmative, tucked the coins away, and slid a key across the counter. "Up the stairs, all the way at the very end of that first hall."

"My thanks," Rochus replied and resettled his saddlebags on his shoulder before heading up the dark, creaky steps and down the long hallway. It branched off in three places, but as promised, his was the room at the very back of the first, main hallway.

It smelled of dust and disuse, with a slight tingling-tang of old, faded magic. Powerful magic, likely wards or some other cage meant to keep something in. But the inn had once been a castle in its own right, before it had been torn down and rebuilt, changed to something less expensive and more profitable than an empty fortress. It wasn't surprising remnants of the fortress remained in more than the old stones.

He dropped his saddlebags on the bed and quickly sent his heavy travel cloak after them. Removing his spectacles, he combed fingers through his short, sweat-damp hair. In the dark room, with nothing but slips of moonlight to lend visibility, his hair appeared black. Better lighting would prove it to be blue, so too his nails and teeth. It was the teeth that always made people most uncomfortable—dark blue, some more pointed than they should be, all the more stark against his too-white skin.

Rochus briefly considered changing into fresh clothes, but there was little point until after he'd had a bath—and no telling what would happen in the dining hall. It would hardly be the first time some country bumpkins or foreign nitwits wailed superstitious nonsense and tried to kill him, never mind he reported directly to the crown.

He smoothed out his robes, frowning at a small tear in the right sleeve. He'd have to stitch it later after his bath.

For the moment, it was time for supper, and hopefully he'd get to enjoy it in peace.

Heading back downstairs, Rochus walked into and through the dining hall, keeping his head up even when the whispers started.

His lips curled briefly when he heard someone ask their companion if Rochus was a vampire. As though he was one of those needle-teethed, full-dead mongrels. He drank blood and his teeth were meant for hunting, but it wasn't the same thing. His teeth were more like those of a wolf—teeth he did not use thus because he was a civilized, capable necromancer of forty-three, not some ravening monster.

Rochus sat down at a table in the corner where he wasn't too close to the fire but would still be warm and would be able to see anyone who tried to approach him.

A couple of minutes after he sat, a pale-faced young man brought him a pitcher and cup with faintly trembling hands. Rochus slid a coin across the table, nodding for him to take it. The boy took it and skittered away, and the whispers increased as Rochus poured himself a cup of blood and sipped it. Pig, which he preferred, save for those rare occasions he was able to get something as decadent as human.

He took several more sips, savored the way it warmed him through. There was nothing he hated more than being cold, but it was the one thing he would always be due to what was called his half-dead state. He wasn't actually dead, half or otherwise, but necromancy demanded a high price, drained away half his spirit, replaced it with those unique spiritual energies he needed to wield his strange magic. The physical effects—the corpse white skin, the death-black bones, the need for food replaced by a need for blood—were what earned necromancers the reputation of being half-dead.

4.5 out of 5 stars
The Only Option is actually my first book from author Megan Derr. Why I haven't ever picked up one of her books before I'm not sure because I really enjoyed this story. Although, who wouldn't love a sexy older Magus and a sweet and sexy young Dragon shifter.

Rochus is a Magus who works for the Crown and is sent off to difficult assignments that only his particular skills can handle. He's a necromancer and works with magic and spirits which bothers many but doesn't stop them for asking for his help through the Queen. On his journey back to the Queen he meets a young Dragon shifter, Tilo, who is definitely not bothered by his being a necromancer.  The next morning Tilo is gone and while Rochus is intrigued by him, he has to answer the summons.  Once at the castle, Rochus gets a surprise, the Queen says he's to be wed and it's to none other then Tilo. Now you can only imagine how Rochus feels after this revelation. It doesn't help knowing the reason why it all happens which sends him off on a mission to help Tilo's save his lands.

While this may be a novella there is a lot of story packed into these pages. It's a story that kept me up late to finish in one sitting, too. The connection between Rochus and Tilo is instantaneous even though Rochus fights it due to the circumstances. He also is conscious of the age gap between them. While it's significant, this is a high fantasy story and both are paranormal creatures so it really shouldn't be too much of a concern. I loved the dynamic between them from the start even with Rochus's determination to not believe Tilo wanted him for himself and not just for what he could do for Tilo.

The author told a very well written story that I would have loved to see in a full length novel. The only thing I missed was more backstory on Tilo, his family, and his stronghold. That's where the story missed that full 5 star rating for me. Otherwise this was a highly enjoyable story with great action scenes, very hot sex scenes, and some really sweet moments between Tilo and Rochus.

I highly suggest picking up this m/m fantasy romance for a very addictive read you won't be able to put down.

Q&A With Megan Derr, author of The Only Option

In The Only Option we have a dragon and a necromancer getting together. What inspired you to write their story?

I had the idea for Rochus for a while, sitting at the back of my mind waiting for the other pieces to fall into place. I've seen other necromancer stories popping up and wanted to do another one myself, but I lacked the rest of it. Dubious came along and I realized I could use him there. And I needed his love interest to be as independent and stubborn as him, but his opposite in many other ways, so younger and flashier and impetuous, which I decided sounded like a dragon somehow.

What is it about mythological shifters like dragon that you think appeals to romance readers?

Dragons are the best! They're powerful, sometime old and wise, sometimes young and dangerous. They make great nemeses and even greater heroes. And everybody loves their obsession with treasure. What could be better than being beloved of a dragon?

Your story is part of ARe's Dubious series, about marriage of convenience. Have you written this type of story before, and what did you find was the biggest challenge in writing it?

It's one of my favorite things to write, I've done it quite a bit.

Tilo and Rochus also give off an enemies to lovers vibe. Do you write this scenario in other stories?

This is the only thing I love writing more than forced/arranged marriage. I saw this call and was beside myself with excitement.  I've written enemies to lovers, or at least 'strong mutual dislike' in many other books – Prisoner, In Despair, The High King's Golden Tongue are just a few. It's always a fun challenge to tackle when writing, and my absolute favorite thing to read. What's better than seeing two idiots who hate each other slowly fall in love? Nothing, at least in my book ;)

If you had the chance to give marriage advice to Tilo and Rochus, what would you say?

Remember you can lean on each other, you stubborn idiots.

Megan Derr is a long time writer of LGBTQ romance and keeps herself busy reading, writing, and publishing it. She is often accused of fluff and nonsense. When she’s not involved in writing, she likes to cook, harass her cats, or watch movies. She loves to hear from readers, and can be found all over the internet.

For more information on other books by Megan, visit her website: www.maderr.com.