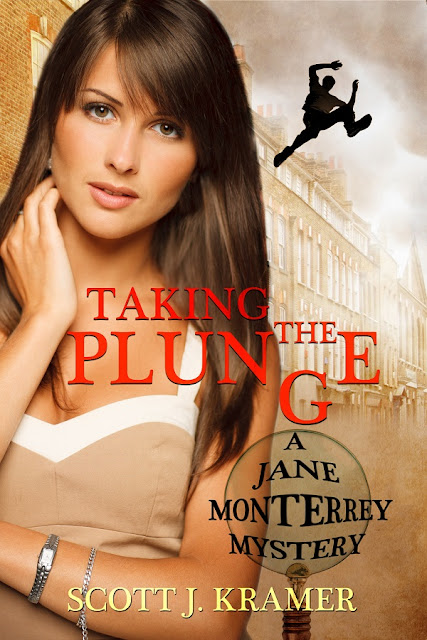 Jane “CK” Monterrey is an inexperienced Cincinnati private eye whose world is flipped when local millionaire George Halberran plunges to his death outside her office window. Hired by George’s eccentric mother, Vucktoria, to investigate her son’s death, Jane has no idea how messy things can get. With the help of sexy Officer Brad Hyatt, her nosy mother and all sorts of quirky new friends—from little numismatics to a monkey that dances to Michael Jackson’s Thriller—Jane stumbles along trying to find out if George really was murdered without getting hurt herself.i

Ever since Scott’s mother denied naming him Scott Fitzgerald Kramer, writing has been in his blood. He watched his grandfather use an old-fashioned typewriter to compose memories about his grandmother. Finding out quickly that typewriters didn’t like him, Scott began carrying a scrap of paper and a pencil. Word processing changed his fate. Scott lives in Cincinnati with his beautiful wife and two adorable little girls. During the day, Scott as Mr. Kramer terrorizes sixth grade students, forcing them to read and write. Slowly, they come to realize that reading is fun and writing is something they have to do to pass his class. Taking the Plunge is Scott’s first novel in the Jane Monterrey Mystery Series. The second book Trouble Comes in Pairs will be published. You can visit Scott at http://scottjkramer.wordpress.com/

Rafflecopter Prize: One winner will be selected to win an eBook copy of Taking the Plunge.
a Rafflecopter giveaway