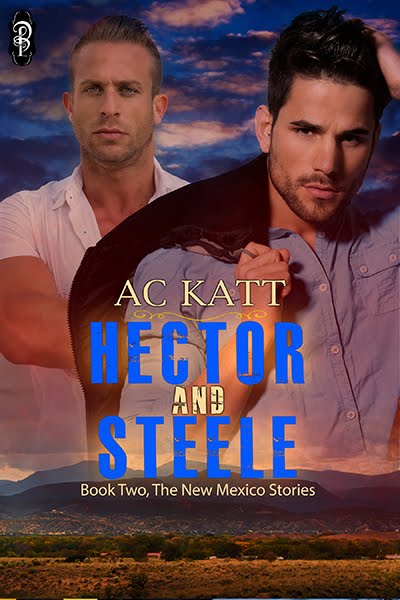 FBI Special Agent Steele Adams has been living with Sandoval County Sheriff Hector Gomez for six months. They are occasional bed partners. Then one afternoon Hector gets a call for a domestic dispute that leaves a bad feeling in his stomach. He arrives to find a man, obviously high on meth, waving a gun around, kicking, beating and shooting at a ten-year-old boy lying on the rockscape of the front lawn. The father goes to lock up but when Hector tries to take the boy, his younger brother, Felipe, runs out screaming for Matteo not to leave.

Both children are seriously abused by their cruel, drug addicted parents and Matteo has been taking care of his brother for years. Hector is a certified foster parent and he winds up asking for and receiving both boys into his home. In falling in love with the boys, Hector and Steele realize how much they love each other. Everyone is safe and happy until the Penas’ get out on bail.

Hector Gomez answered what he thought to be a domestic violence call. The neighbor who called it in sounded hysterical. As the Sheriff of Sandoval County, he took too many calls for domestic abuse. They usually involved alcohol or drugs but something in his cop’s gut told him this was different. He pulled into the driveway, got out of his Explorer, and saw a wild, glassy-eyed man standing on the rock-strewn lawn, waving a gun, and beating a ten-year-old kid about his body. The man wasn’t drunk, he was high. He had the kid on the ground, kicking him in the ribs, groin, and legs with steel-toed boots. The gun waved threateningly in the child’s face, which the kid tried to protect with waif-thin arms.

The man and the youngster appeared to be of Hispanic origin. The boy had rolled up in a ball in the front of the house, clothed in nothing but holey blue jeans and a thin T-shirt. Although only mid-November, New Mexico was experiencing an early cold snap due to the enormous El Nino build-up in the Pacific. He jumped from his Explorer and quickly shouted at the man to step away.
“I’m going to kill you, you little faggot.” He pulled the trigger as the boy tried to roll away. He fired the gun a second time, barely missing the boy.

Gomez’s backup, Deputy Edwards, fired a warning shot. The man turned to Edwards and pointed the gun. Hector shot the weapon out of his hand. The man fell next to the boy and spit in the kid’s face. After Edwards helped him separate the man from the boy, Hector instructed him to call a bus and the Children, Youth, and Families Department

“Take him to UNM Sandoval. After the medics are through with him, book him and hold him for arraignment on attempted murder, child abuse, child endangerment, resisting arrest, and anything else you can think of to throw at him.”

While waiting for the second bus so the EMTs could take the kid to the hospital, he got a blanket from his trunk and draped it around the boy whose chest heaved with sobs.

“What’s your name, son?” Hector knelt and put his arm around the boy’s shoulders.

A woman at the storm door shouted obscenities in Spanish, prominently featuring the word maricón, a derogatory term for gay.

Suddenly, a small boy of about five came barreling out of the house and threw himself onto the older boy. “What did he do to you? Are you okay? You can’t leave. You can’t leave me alone with them.” He sobbed as he held on tight to his brother.

“I demand that you let me take my younger son back into the house. Felipe, come.” She grabbed the kicking and screaming child, gave him a casual slap, and dragged him back through the door.

The brother, clearly fearful and still sobbing, raised his face to Hector. “What do I do? She’ll take this out on Felipe, and he isn’t strong enough to handle her or him.”

Hector put his arm around the kid’s shoulder again. “Your father, such as he is, will be in the county lockup, at least for the night. We can figure things out in the morning. I won’t let him hurt your brother.”

“But she will. She isn’t as strong as him, but she’ll use the belt to hurt Felipe for coming out of the house.” The boy’s chest heaved as tears ran down his cheeks unchecked. “Why was I so stupid? Now Felipe is going to get punished, and it’s my fault. They weren’t supposed to be home.”

The kid turned his head toward the little boy still crying at the door. “Felipe, don’t get into trouble. I’ll come get you. I won’t leave you alone for long.”

AC Katt was born in New York City’s Greenwich Village. She remembers sitting at the fountain in Washington Square Park listening to folk music while they passed the hat.  At nine, her parents dragged her to New Jersey where she grew up, married and raised four children and became a voracious reader of romantic fiction. At one time she owned over two thousand novels, until she and her husband took themselves and the cat to New Mexico for their health and its great beauty.

Now, most of AC’s books are electronic (although she still keeps six bookcases of hardcovers), so she never has to give away another book. AC is a late bloomer, however, she claims to have found her niche writing LGBT romance.

She hangs out at ACKatt.com and ackattsjournal.com; where she keeps her blog.  To get snippets of new releases and Works in Progress subscribe to AC Katt’s Kattery by sending an e-mail to mlhansel@gmail.com. 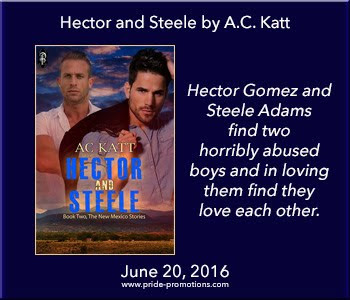 Rafflecopter Prize: Both books in the New Mexico series