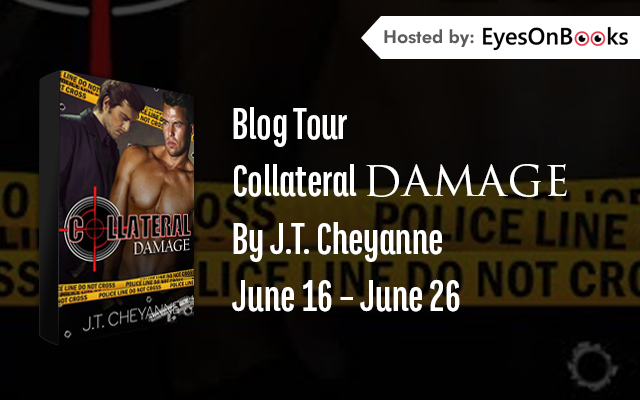 Fleeing the questions and horrific memories in Miami-Dade, Trevor Garrett accepts a deputy position in the small town of Rolling Fork, Mississippi. Plagued by anxiety attacks and an abhorrence to being touched, Trevor rebuffs his best friend’s attempts to set him up. He has no desire for any type of relationship; until the local golden boy strolls into his line of sight at the neighborhood dive…

Logan Andrews just wants to take care of his mama. After years of serving his country in the Army Special Forces, Logan resigns when he learns his mother is suffering from advanced stages of Alzheimer’s disease. A night out with old friends turns heated when the newest deputy in town catches his attention…

When a sexually deviant killer sets his sights on the gay men in the area, Trevor is assigned the case. In a wicked twist, all evidence points to Logan. Can Trevor’s past be repeating itself? In a race against a killer, Trevor struggles to overcome his own insecurities and clear the man whose touch sets him on fire. Will he succeed or will their budding relationship become Collateral Damage? 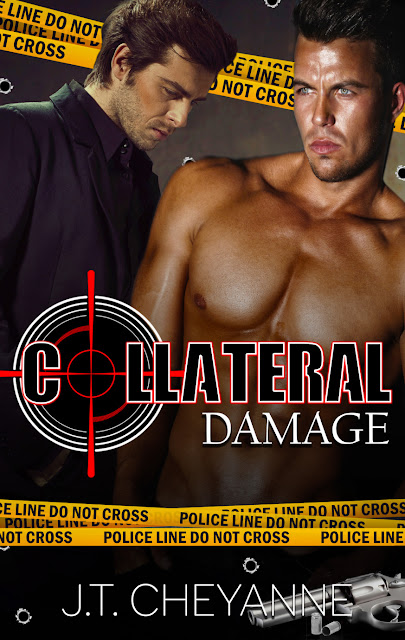 In the distance, gunfire erupted, a planned diversion to further cover the jumpers. The ebony nylon whispered out above him and the snatch and grab whipped him upright when the chute caught air. Directly below him, fire flashed as an anti-aircraft missile tore out into the night.

“What the fuck!” Sawyer’s voice vibrated in Logan’s ear. “They aren’t supposed to be here.” Almost simultaneously the order to abort roared through the com.

“Abort mission. Abort mission. Snake is in the wrong den. Say again. Abort mission and await orders.” The radio went dead. Logan tightened his grip on the toggles. Arms straining, he manhandled the chute to change direction. Gunfire sprayed around him. A hiss of pain echoed in his ear. Sawyer was hit.

FUCK! FUCK! FUCK! The curse resonated in his head as he pulled on his memory of the terrain. He hoped Sawyer had paid attention. With the radio possibly compromised, they only had their wits to rely on. He opted for the trees, better cover though the landing would be rougher.

More gunfire erupted and his chute jerked. Better it was hit than him. He fought the lines and concentrated on the trees rushing to meet his Army issued boots. He spied a small opening, prayed Sawyer followed suit and aimed for the maw.

Almost directly above the gap in the trees, he deliberately collapsed the nylon and prepared to meet the ground hard. He hoped the snow would absorb some of the impact. The tuck and roll was second nature as was palming his preferred Sig in his left hand.

One handed, he unclasped the rigging and slid the pack from his shoulders while keeping an ever vigilant watch on the area around him. Another inner curse erupted when the unmistakable sound of something heavy crashing into the trees reached his ears. He was moving before the sound fully registered. If he heard it, the enemy did too.

“Logan.” The pained word came from above. His head snapped up to see the soles of Sawyer’s combats.

“Cut the fucking lines, soldier.” The order emerged harsh though quiet. No answer. “Fine, I’ll do it my damned self.” Above him, Sawyer’s form wobbled and the sound of metal on nylon filled the air. Logan braced himself and caught his fellow paratrooper as he tumbled free of the branches. A groan of pain was muffled against his BDUs as Sawyer buried his face against Logan’s chest.

“This is going to hurt like fuck, but we gotta get outta here.” The man in his arms went limp as he passed out from the pain. “Probably best partner; can’t say I blame you.” With Sawyer’s weight combined with the two combat packs weighing him down, Logan jogged deeper into the cover of the trees. Voices rambling in another language pierced the night. He needed a place to hide, a defensible position or they were screwed. His eyes tracked the dark forest as he ran.

They'd dropped into the “green frontier” the no-man's land adjacent to Hungary's border. Refugees surged across the border in waves desperate to escape Milosevic's dirty war. Somewhere in the expanse of land between the borders, a rebel army fought against the KLA and the FRY.

Logan's objective was to make contact with the leader and offer American assistance. Covertly. Special Ops only. But, someone had tipped off the Serbian president and his army. If Sawyer died, Logan would find the traitor and rip his tongue out of his head.

From out of nowhere, a man appeared. A refugee by the look of him with ancient eyes despite his youthful appearance. Soldier and civilian stared at each other. The stranger’s hand lifted motioning Logan to follow. He hesitated. The refugees could be as dangerous as the KLA and the FRY; he could be walking into a trap. The refugee’s eyes darted to the Sig in Logan’s hand and then behind him to the voices. He patted his own chest.

“Safe. No hurt.” The broken English did little to alleviate Logan’s distrust. A finger pointed behind him. “Bad. You come.” Again, the stranger patted his chest. With a curse, Logan nodded once. The man whirled and took off with Logan hot on his heels, bare heels, in the near zero degree temperature.

#1 Best Selling Author of Grand Slam, J.T. Cheyanne is a genre crosser who writes romance and paranormal in the m/m and m/f genres. J.T. Cheyanne resides in the beautiful state of Alabama. J.T. lives with her two sons and daughter. An avid reader since fourth grade, she has only just started writing her own stories. She also has several works published with her co-author, V.L. Moon.